To please his king, bananas, treasure

Getting on King Zongo's bad side
Yo-Yo is a minor antagonist featured in the Disney Junior series Jake and the Never Land Pirates. He's a anthropomorphic monkey and member of the Monkey Pirates lead by King Zongo. His vocal effects are provided by Loren Hoskins.

Yo-Yo is shown to be much crazier and somewhat spacey appearance than the other Monkey Pirates. However though he is prone to heavy laughter he has a much tougher grip on his mission than his crew-member, Bing-Bong. But he is fairly dimwitted and relies on King Zongo to make decisions for him. Though obedient to King Zongo, he is also willing to avoid sharing information with his leader for fear of facing King Zongo's anger.

Yo-Yo alongside King Zongo reappears in the episode "Monkey Tiki Trouble". They follow Captain Hook and his crew into the city of to the legendary Golden Monkey Tiki. But in the process of stealing the Golden Monkey Tiki from Hook, the tiki causes Hook and Zongo to switch bodies. While in Zongo's body the Monkey Pirates served under Hook. 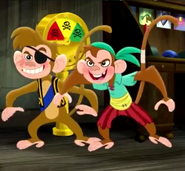 Retrieved from "https://jakeandtheneverlandpirates.fandom.com/wiki/Yo-Yo?oldid=84693"
Community content is available under CC-BY-SA unless otherwise noted.