"Birds of a Feather"

The fact that the princess has returned

"All hail the royal sky bird princess!"
The Wise Old Parrot is a recurring character from Jake and the Never Land Pirates. He is a elderly anthropomorphic Scarlet Macaw living on SkyBird Island serving as the royal adviser of the SkyBird princess. He was voiced by the late Adam West.

Wise Old Parrot first appears in the episode "Birds of a Feather." Winger meets the Wise Old Parrot; ruler of the kingdom. He informs Winger that she is the lost princess of the kingdom. She is crowned and the kingdom begins to rejoice. That all ends when Captain Hook arrives and steals her crown. Jake, Skully and Winger chase after the captain eventually defeating him and restoring peace to the SkyBird Kingdom.

In the episode "SkyBird Island is Falling!". Here, The Wise Old Parrot tells Winger and Skully Skybird Island will plummet to the Never Sea without the golden tree's leaves. Winger then watches helplessly as the leaves are stolen by Captain Hook and his pirates. Jake, Izzy and Cubby appear to save the island to little avail. Winger and Skully eventually gather the island's natives and attack Hook stealing the leaves back in the process. Although the leaves are back in Winger's possessions, they may not be able to put the leaves back in time. Thankfully, Izzy's Pixie Dust is able to restore the leaves onto the branches. After the pirates return to Pirate Island, Winger sends a thank you message hoping to see the pirates again soon.

In the episode "Sail Away Treasure" Jake and his crew discover Wise Old Parrot ship the Leaky Beak on Shipwreck Beach they soon restored the ship when they discover a treasure map on the ship sail. Captain Hook plotted to steal the ship and the treasure located on Never Peak. Curious to find out what was hidden in the treasure chest and who ship belong to they soon found a clue leading the young pirates back to SkyBird Island were they were greeted by Winger and Wise Old Parrot who revealed he was the Leakey Beak captain.Captain Hook and Mr. Smee soon arrive and attempt to steal both the treasure and the ship, Jake was about to give chase but Wise Old Parrot wasn't too worried about the treasure as Hook open the chest treasure revealed a whistle. Unknown to Hook the whistle summons the Feathered Four the royal protectors of SkyBird Island who swooped down and carried Hook off. In an attempt to rescue his captain Smee pulls the wrong lever retracting the ship's wings sending Smee and the Leakey Beak falling from the sky only to be rescued by Izzy and her Pixie Dust. Thwarted yet again by Jake and his crew Hook and Smee heads back to the Jolly Roger. Skully along with his mates return the Leaky Beak to Wise Old Parrot who gives the ship to Skully.

Wise Old Parrot reappears in the episode "Flight of the Feathers" sending Top Bird and the Feather Four on their hundredth mission to use the Platinum Feather to find the hidden treasure of the Never Land Nest. 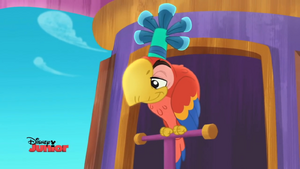 Retrieved from "https://jakeandtheneverlandpirates.fandom.com/wiki/Wise_Old_Parrot?oldid=86808"
Community content is available under CC-BY-SA unless otherwise noted.