Jake and the Never Land Pirates Wiki
Register
Don't have an account?
Sign In
Advertisement
in: Parrots, Females, Animals,
and 10 more

"Birds of a Feather"

Princess of the SkyBird Kingdom

Mostly anything with sparkles, singing

Becomes ruler of the SkyBird Kingdom

"Sparkly!"
Winger, later known as Princess Winger, is a recurring character from the Disney Junior animated series, Jake and the Never Land Pirates. She is a young parrot princess who is the ruler of SkyBird Island. She is voiced by Lisa Loeb.

Winger first appears in the episode "Birds of a Feather". Jake and his crew were atop Skull Rock watching the various parrots flying around socializing. A parrot named Winger meets Skully and asks him if he can help her find the SkyBird Kingdom. Skully informs Jake and the crew is off. When they finally reach it, Winger meets the wise Wise Old Parrot; the elder of the kingdom. He informs Winger that she is the lost princess of the kingdom. She is crowned and the kingdom begins to rejoice. That all ends when Captain Hook arrives and steals her crown. Jake, Skully, and Winger chase after the captain eventually defeating him and restoring peace to the Sky Bird Kingdom.

In the episode "SkyBird Island is Falling!" Here, Winger and Skully are enjoying each others company eventually coming to the island's magic golden tree. Skully and Winger learn from the Wise Old Parrot that the island will plummet to the Never Sea without the trees golden leaves. Winger then watches helplessly as the leaves are stolen by Captain Hook and his pirates. Jake, Izzy and Cubby appear to save the island to little avail. Winger and Skully eventually gather the island's natives and attack Hook stealing the leaves back in the process. Although the leaves are back in Winger's possession, they may not be able to put the leaves back in time. Thankfully, Izzy's pixie dust is able to restore the leaves onto the branches. After the pirates return to Pirate Island, Winger sends a thank you message hoping to see the pirates again soon.

Winger makes a minor speaking role in "Sail Away Treasure " Winger and Wise Old Parrot were enjoying the fine weather on SkyBird Island when they notice Jake and his crew arriving on a flying ship they restored. Wise Old Parrot revealed to everyone that he was the original captain of the young pirate teams new ship the Leaky Beak and how he lost it awful storm. Jake and his crew inform his feathered friends how they found the Leakey Beak and Wise Old Parrot's treasure. Suddenly Captain Hook and Mr. Smee soon arrive and attempt to steal both the treasure and the Leakey Beak. Winger dreads how they would stop the villains from escaping, Skully reassured Winger he and his mateys will stop them from escaping and return Wise Old Parrot his treasure. But Wise Old Parrot wasn't too worried about the treasure as Hook opens the chest treasure revealing a whistle. Unknown to Hook the whistle summons the Feathered Four the royal protectors of SkyBird Island who swooped down and carried Hook off. In an attempt to rescue his captain Smee pulls the wrong lever retracting the ship's wings sending Smee and the Leakey Beak falling from the sky only to be rescued by Izzy and her Pixie Dust. Thwarted yet again by Jake and his crew Hook and Smee heads back to the Jolly Roger. Skully along with his mates return the Leaky Beak to Wise Old Parrot who gives the ship to Skully. Winger complemented Skully by calling him Captain Skully and how she like the ring to that.

Winger reappears in the episode "Jake's Birthday Bash! " as one of the various guests to greet Jake and wish him a happy birthday when he and his crew return to Pirate Island.

Winger is mentioned in the episode "Who's a Pretty Bird?", When Skully receives a mirror as a gift from Winger off-screen,she also calls him handsome, after hearing this Skully can't stop admiring his own reflection causing him to fail in his lookout duties causing Bucky to get tangle within seaweed of Burglar's Bay as Jake and his crew journey to save Butterfly Bluff from Captain Hook.

Winger makes a nonspeaking cameo in the episode "Smee-erella!", attending Red Jessica's pirate convention. She could be seen conversing with Skully. Later, the two birds are seen dancing during the pirate waltz.

Winger makes a nonspeaking cameo appearance in the episode "Captain Scrooge ", she can be spotted taking part in the great pirate feast at the end of the episode.

While Winger doesn't make a physical appearance in the episode "Flight of the Feathers", she is briefly mentioned by Top Bird as he guessed what the hundredth mission the Wise Old Parrot summoned him and his team the Feather Four to complete.

Winger makes a brief cameo appearance in Birthday Bash. She can be seen wishing Jake a happy birthday with the rest of his Never Land friends welcoming him back on Pirate Island. Winger is featured alongside Jake, Izzy, Cubby, Skully and the Never Bird on the cover of the Disney Junior Magazine Issue 16 and the header of issue 18 with Jake. 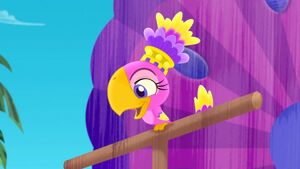 For more pictures and screenshots of Winger, click here.