Start a Wiki
The Wing Sword is a magical sword uncovered by Jake in the Disney Junior App "Quest For the Four Swords."

In order to free Captain Hook and Mr. Smee from a magical stone door.Jake most venture through the island of Never Land and collect the four magical swords that can open the door.The first sword Jake comes across in his adventure is the Wing Sword hidden deep within Big Bug Valley. Using the Wing Sword Jake is able to fly a cross large gaps with ease.

The Wing Sword reappear in the online game Disney Junior App "Soaring Over Summer Arcade",it is among the various power-up the player can gain to help traverse and evade the various stage hazards. 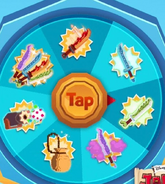 Add a photo to this gallery
Retrieved from "https://jakeandtheneverlandpirates.fandom.com/wiki/Wing_Sword?oldid=91401"
Community content is available under CC-BY-SA unless otherwise noted.