Where the Rainbow Lands is one of the closing musical numbers featured in Jake and the Never Land Pirates. The song is preformed by Sharky and Bones.

There be treasure at the end of the rainbow

Treasure at the end of the rainbow

Where did all the clouds and the rain go?

The sunshine turned into a rainbow

All the pretty colors so bright and bold

Do they really hit that buried gold?

Don't forget indigo and violet, too

I forgot them colors So thank you

The rain's all gone but the bow's still there

The sky's full of colors hanging in midair

Set sail all hands where the rainbow lands

Before the sun sinks too low

If the trade wind's fine we'll be there in time

Before it fades away

There be treasure at the end

Before it's gone again

Treasure at the end of the rainbow 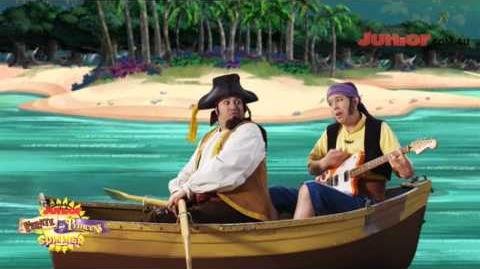 Where the Rainbow Lands
Add a photo to this gallery

Retrieved from "https://jakeandtheneverlandpirates.fandom.com/wiki/Where_the_Rainbow_Lands?oldid=77946"
Community content is available under CC-BY-SA unless otherwise noted.