“My brothers and I once had adventures on Never Land. I wrote all about them in a special book.”
―Wendy Darling

Wendy's Book is a magical book that appears in the Disney Junior animated series Jake and the Never Land Pirates. It was written by Wendy Darling.

Sometime after the events of the first film to assure that she and her brothers would never forget to keep the spirit of Peter Pan alive,Wendy wrote down the events of the adventure they had on Never Land down in a book.Michael, John and even Nana enjoy hearing the tales from the book ever night before bed. Still waiting for there next visit too the island.

“Well, Wendy, your storybook is magical.Just like Never Land. It's gotta have all its pages from the first to the very last.Without them, none of us will ever remember the stories of our adventures. ”
―Peter Pan

The book serves as the connection between the Darling siblings and Never Land, and as a result, the more the book is damaged, the more Wendy and her brother's memories of Peter and Never Land as a whole are obliterated.Later during the course of the episode Peter reveals it wouldn't just effect the Darlings but everyone as a whole would soon forget as seen with Captain Hook and his crew slowly began to forget the reason for stealing the book in the first place.

Wendy's Book first appearance in the series in the special, "Jake and the Never Land Pirates: Battle for the Book". In the special,Michael and John love hearing Wendy's stories about Never Land-especially when Peter Pan outsmarts Captain Hook! But that sneaky snook Hook hates to look like a bumbling fool, so he decides to fly to London, steal Wendy's storybook, and destroy her stories once and for all.Peter Pan sends Jake, Izzy, Cubby, Skully, and Tinker Bell to London to help Wendy, John, and Michael find Hook and retrieve Wendy's book. Unfortunately, without the book, Wendy, John, and Michael start to forget the stories and their adventures on Never Land, prompting Peter to send Tinker Bell,Jake and his crew to help battle Hook and save Wendy's memories. To help further the success, Wendy, Michael, John and Nana, tag along on the adventure, as well.After a long chase through London Captain Hook decides the fitting place to rid himself of Wendy's storybook is the the Valley of Fury, one of the most dangerous places in Never Land.But before Hook could destroy the book he is confronted by Peter Pan, the Darling siblings and Jake's pirate team.Wendy demand her book at once but Hook payed no heed to her request and tossed the book into the fires of the Valley of Fury.Izzy quickly intervenes using her Pixie Dust to save the book from the flames but in the processes the book's pages are scattered all across Never Land.Later at Skull Rock with most of the storybook pages collected Wendy notice that one page is still missing and the Darling sibling are still forgetting there adventures in Never Land.Suddenly Wendy spots the last page they soar over head to complete the storybook it is soon captured by Captain Hook who gloats but this short lived as he and his crew start to lose their memory about the book.Jake informed Hook that he stole Wendy's storybook and been trying to destroy it and its stories.Captain Hook was still confused about the storybook so Jake suggest he'd read the page he was holding.Hook soon realize he was not portrayed as a bumbling fool but the scurvy villain of the tale.Jake also informs the captain if Wendy's storybook doesn't have all its pages, no one will ever remember the stories of Peter Pan and Captain Hook.Not even him. Captain Hook agreed these stories of him are indeed a valuable treasure ever and should never be destroyed as he hand the last page to Wendy, the page is blown from the captain's hand and blown back to the Valley of Fury.Using Izzy's pixie dust Jake soars after the page but the winds seem to strong for Jake alone Captain Hook comes to Jake aid with his Whirly-Hook saving the page from the valleys blue flames once more and returning the page back to Wendy.The pages magically restore themselves back to their original order, and the book, along with the Darlings, Hook, and his crew's memories, are restored.

Wendy's Book only appearance in the printed media is the storybook adaption of Battle for the Book.

Wendy's Book only video game appearance in the series is the online game "Jake's Lost Story Quest." Like the episode the special the book is stolen by Captain Hook.Unlike the episode the special the pages are scattered across the map and the player most journey across London and Never Land to recover the pages.However Hook will also pursue and if he catches the player he'll swipe the pages. 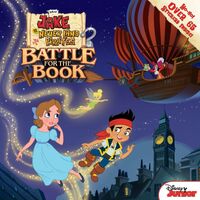 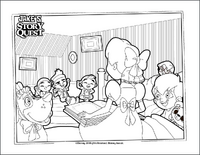 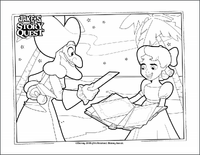 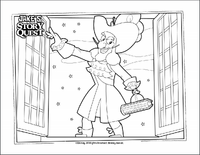 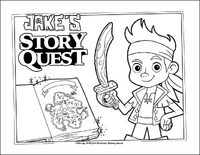 Add a photo to this gallery
Retrieved from "https://jakeandtheneverlandpirates.fandom.com/wiki/Wendy%27s_Book?oldid=91603"
Community content is available under CC-BY-SA unless otherwise noted.