Leader of the Feathered Four
Guardian of SkyBird Island

Royal threats, not being able to complete a mission, Fast Claw, getting injured

“You're Top Bird, leader of the Feathered Four!”
―Skully

Top Bird is a supporting character from Jake and the Never Land Pirates. He is the adventurous leader of the Feathered Four that protect all of SkyBird Island. He is voiced by James Arnold Taylor.

An early design of Top Bird and the rest of the Feathered Four appear in the episode "Sail Away Treasure". Jake and his crew discover Wise Old Parrot's ship, the Leaky Beak on Shipwreck Beach and restore the ship when they discover a treasure map on the ship's sail. Captain Hook plots to steal the ship and the treasure located on Never Peak. Curious to find out what was hidden in the treasure chest and to whom the ship belongs, they soon find a clue leading the young pirates back to SkyBird Island were they are greeted by Winger and Wise Old Parrot, who reveals he was the Leaky Beak's captain. Captain Hook and Mr. Smee soon arrive and attempt to steal both the treasure and the ship. Jake is about to give chase, but Wise Old Parrot isn't too worried about the treasure as Hook opens the treasure chest to reveal a whistle. Unknown to Hook, the whistle summons the Feathered Four, the royal protectors of Skybird Island, who swoop down and carry Hook off.

In the episode "Flight of the Feathers", Wise Old Parrot summons Top Bird and rest of the Feathered Four on their hundredth mission to use the Platinum Feather to find the treasure of the Never Land Nest. While Top Bird and his team set off to find the treasure, they are attacked by Beatrice Le Beak's pet falcon Fast Claw, who manages to steal the Platinum Feather and injure Top Bird in the process. Luckily, Top Bird lands on Pirate Island, where he meets Jake and his crew. Skully was very impressed, being a huge fan of Top Bird's many adventures. Top Bird knew of Skully's heroism as well and asks him to lead the Feathered Four in their quest to retrieve the Platinum Feather from Le Beak and locate the treasure on the top of the Never Land Nest while Jake, Izzy and Cubby tend to Top Bird's injured wing. Top Bird reappears at the end of the episode back on SkyBird Island when Skully and the rest of the Feathered Four present the treasure to Wise Old Parrot. 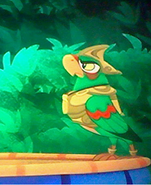 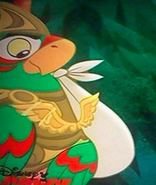 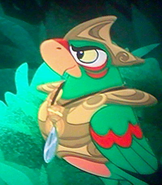 The earlier design of Top Bird and his team as they appear in "Sail Away Treasure".

Retrieved from "https://jakeandtheneverlandpirates.fandom.com/wiki/Top_Bird?oldid=88837"
Community content is available under CC-BY-SA unless otherwise noted.