The Tiki Trees are sentient trees resembling tiki idols that only grow within Tiki Forest. They are depicted as being friendly and wise figures. They can be comical at times, as they enjoy singing and taunting Captain Hook. They serve as Jake and his crew's companions and have been known to be quite helpful to the young pirate team and their companions in their adventures.

Tiki Forest first appeared in the episode "Night of the Golden Pumpkin". Jake and his crew visited the place meet the Tiki trees who gave Cubby a fright when he heard the lead tree talk, but he informs the young pirates that were all friends here in Tiki forest. He and the other trees were more than happy to point the puny pirate crew in the direction of the Pirate Pumpkin Patch where the Golden Pumpkin can be found. But it was a whole different story when Captain Hook and Mr. Smee arrive at the forest.

Tiki Forest appears in the episode "Peter's Musical Pipes" when Sharky and Bones join Jake and his crew on their journey to uncover whatever treasure is hidden within Great Tree Glade. The pirates had to traverse through Tiki Forest,but the Tiki trees were sleeping and their branches block the path. Izzy had the idea to play a lullaby so the trees would sway their branches out the way. Jake asks Sharky and Bones strum up a tune causing the trees to move to allow the pirates to pass on.

Tiki Forest makes a brief cameo appearance in the episode "Rock the Croc!"Jake and his crew receive a map and message in a bottle from Peter Pan showing them the way to Pirate's Plunge where they can cool off. Tiki Forest can be seen on the map.

Tiki Forest appears again in "Jake and the Never Land Pirates: Peter Pan Returns " Hook and his crew flee into Tiki Forest with Tick-Tock the Crocodile in pursuit. Later when Jake and his crew accompanied by Peter Pan enter Tiki Forest to recover Peter's shadow from Hook. The Tiki Trees quickly greet Peter. Jake and his companions ask the Tiki Trees which direction Hook and crew went. Which the Tiki Trees happily point the group in the right direction. Unable to fly across the gap in the chasm with his missing shadow Jake suggest Peter and the rest of the crew use the hanging vines to swing across to the other side allowing them to proceed with the chase to the Valley of Shadows.

Tiki Forest appears once more in the episode "Pixie Dust Away!". Izzy drops her pixie dust on Pixie Dust Away Day. The fairies inform the puny pirate team to find the Fountain of Forever that makes Pixie Dust replenish their supply once more. Tiki Forest was the first stop on the way to the fountain.

Tiki Forest is visited again in episode "A Feather in Hook's Hat" When Captain Hook tries to pluck one of The Sing-Songbird's feathers for his hat he chases her into Tiki Forest, Hook tries to force the Tiki Trees into revealing the whereabouts of the Sing-Songbird but they refuse. Jake, Izzy, Cubby and Skully disguise themselves as Tiki Trees trick Captain Hook and his crew by pointing the villainous pirates in the wrong direction.

Tiki Forest reappear in the Halloween episode "Tricks, Treats and Treasure!" as Jake and his crew second stop during there trick or treating.

Tiki Forest is the first stop during "Jake's Birthday Bash!" were the puny pirate team enjoy a game of pin the tail on the Tick-Tock Croc with the Tiki Trees. But the game goes from fun to worse when it became Captain Hook turn when he accidentally pins the tail on the real crocodile, causing the ravenous reptile to pursue Hook yet again until Jake asks the Tiki Trees to lend Hook a hand.

Tiki Forest is briefly mentioned in the episode "Jake's Never Land Rescue" Jake returns to Pirate Island to enjoy lunch with his crew-mates after being sent off-screen by Peter Pan to remove a blockage to river said to flow into Tiki Forest. Tiki Forest is also one of the locations Jake said he'd miss if he left the island with Peter for outside adventures. Suddenly after rejoicing with his crew Jake's sword mysteriously vanishes. The crew learns from Fairy Rock that Never Land is in danger of disappearing forever. The crew begins their quest to save Never Land.

Tiki Forest makes a brief reappears in the episode "The Sneaky Snook-Off", Jake and his crew were enjoying a game of Hide and Go Pirate when Captain Hook and Beatrice Le Beak challenge each other to a contest to determine who is the sneakiest snook in Never Land.

Tiki Forest makes a brief reappears in the episode special "Jake and the Never Land Pirates: Battle for the Book",when Jake and his crew return to Never Land with the Darling siblings to Hangman's Tree it revealed that the tree has underground root tunnels leading to various location on Never Land, one being Tiki Forest. Later after the various pages from Wendy's storybook are scattered all over Never Land during the Valley of Fury confrontation a few pages land in Tiki forest,Izzy and John Darling enter the forest to reclaim pages from atop of one of the Tiki Trees.

Tiki Forest reappears in the episode "Tiki Maskerade Mystery", Jake and Captain Hook's crews join forces to capture a thief when the Golden Tiki was stolen during the Tiki Maskerade. Once the Tiki Trees discover that Beatrice Le Beak they banish her from the party.

Tiki Forest reappear in the episode "Captain Hook's Last Stand!", when Captain Hook turns Peter Pan to stone with the Doom Stone, Captain Jake and his crew get help from Wendy, John and Michael to find the magic items needed to rescue their petrified friend. To assure Peter's safety Jake and his friends hide him within Tiki Forest.

Tiki Forest appears in the storybook adaption of Birthday Bash. Like the episode "Jake's Birthday Bash!", Tiki Forest is the first place visited by Jake and his crew as apart of his surprise party. Jake and his friends enjoy a game of pin the tail on the Tick-Tock Croc. However, during Captain Hook's turn, he wanders off the trail accidentally pinning the tail on the real crocodile sleeping nearby. Tick-Tock enraged pursues Hook trough the forest until Jake asks one of the Tiki Trees to help Hook by lifting him up out of the crocodile's reach.

In the storybook A Skipping Day Captain Hook and Mr. Smee manage to steal Jake and his crew's jump-rope and attempt to flee into Tiki Forest to escape from the young pirate team. Jake and his crew soon follow Hook in pursuit to reclaim their treasure.

Tiki Forest makes a reappearance in the storybook adaption of Battle for the Book. As Jake and his comrades try to collect the scattered pages of Wendy's Book from the various sections of Never Land.Izzy and John find a few of the pages atop one of the Tiki Trees. 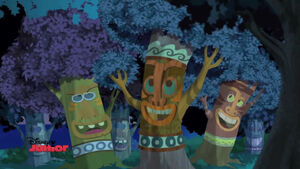 For more pictures and screenshots of Tiki Forest, click here.

Retrieved from "https://jakeandtheneverlandpirates.fandom.com/wiki/Tiki_Forest?oldid=90986"
Community content is available under CC-BY-SA unless otherwise noted.