Playing and swimming free in the Never Sea

Captain Hook
The Seahorses our friendly creatures of the deep that have appeared in multiple episodes of Jake and the Never Land Pirates. Their vocal effects are provided by Dee Bradley Baker.

The Seahorses first appeared in the episode "The Seahorse Roundup", Izzy wanted to show Jake, Cubby and Skully one her favorite locations in Never Land Seahorse Shallows home of the Never Land Seahorses. The seahorses our very sweet creatures of the deep and are easily frightened by loud noises and the only way to calm them down is if Izzy sings them a lullaby. Captain Hook plotted to steal the seahorses and in slave them to pull his rowboat, but Jake and his crew put a stop to his scheme and return the seahorses to their home.

The Seahorses our seen again in the episode "Treasure of the Tides" While Hook and Mr. Smee were trying to beat Izzy, Marina, Stormy and the other mermaids to the Treasure of the Tides. A large school of Seahorses gave Hook an idea to keep Izzy and the mermaids at bay by spooking the sea creatures toward Izzy and the mermaids, Hook could beat them to the treasure.But Hook didn't count on Izzy's quick wit like in the (episode "The Seahorse Roundup") Izzy, Marina and Stormy began to sing a lullaby to calm the seahorses down so they could safely pass.

In the episode "Seahorse Saddle-Up!" introduced large seahorses that Jake and his crew could ride as mounts in a Never Sea race held at Mermaid Lagoon.Izzy and her seahorse Sea Flower were the main focus of the episode.

Sea Flower reappears in the episode "Captain Hook's New Hobby" while Izzy was trying to teach Captain Hook how to ride whales as his potential new hobby.

In the episode in the special '"The Great Never Sea Conquest". When the evil Mer-wizard, Lord Fathom is released from an underwater prison, he sets out to take over the Never Sea by awakening the legendary giant, three-headed serpent, the Strake. The Seahorses were among the various sea creature being controlled by Lord Fathom during his hostile take over of the Never Sea. During the final phase of the battle between Jake and Lord Fathom, King Neptune appears and tells Jake that all he needs to defeat Fathom and the Strake is to believe in himself. Using the powers of his sword, Jake finally defeats Fathom and the Strake. He then re-imprisons the Strake and destroys the DarkLight Emerald, freeing Queen Coralie, Marina, Stormy, and the sea creatures.

The Seahorses makes a brief appearance in the episode " Hop-Hop-Hop!",Jake recalls various events as he explains to the viewers how even hopping can be a useful pirate skill.

The Seahorses appears in the book "Treasure of the Tides", based on the episode of the same name. Izzy joins Marina and the other mermaids at Hidden Cove for the Treasure of the Tides ceremony. But that sneaky snook Captain Hook has his eye on the mermaids' treasure. 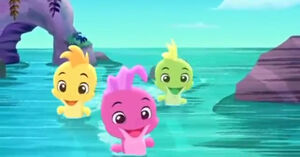 For more pictures and screenshots of The Seahorses, click here.

Retrieved from "https://jakeandtheneverlandpirates.fandom.com/wiki/The_Seahorses?oldid=89664"
Community content is available under CC-BY-SA unless otherwise noted.