"Season of the Sea Witch"

Traditional "wicked witch" imagery
The Wicked Witch of the West (from MGM's Wizard of Oz, notably for the green skin)

"Warts and worms!"
"And not even Jake and his sea rats will stop me."
"You thought you could keep me away? Now, I shall turn you into a statue of gold...forever."
" You're one of those meddling sea rats!"
" Warts and worms! How many Pirate Princesses are there?"
"If you want to stop me, you'll have to catch me first. But how can you stop something you cannot see?"
"You locked the door, but not the window."
"Now, pretty princess, behold!"
"I shall turn you into a statue of gold, forever! "

“Warts and worms... I'm not letting that perky little princess zap me with her rainbows. This time, I'll turn her into a gold statue forever.”
―The Sea Witch

The Sea Witch was a recurring antagonist from the television series Jake and the Never Land Pirates. She is voiced by Carol Kane.

Much of the Sea Witch 's past has been revealed in the series, where it is revealed that the witch grew up alongside the Pirate Princess. As a young spell-caster, she uses to test her magic on the princess as playful pranks but the princess believed that the witch was being cruel, resulting in the witch spending most of her childhood hated and alone. These are all prime factors in the reasons for the Sea Witch 's undeniable cruelty.

Years later, the Sea Witch would eventually grow in power, fueled by her anger and sorrow her never-ending pursuit for revenge on the Pirate Princess continued. One day, during the Pirate Princess voyage across the Never Sea, The Sea Witch casts a spell on her turning her into 24k gold. Causing the princess's ship to crash inside of a hidden grotto and she was never seen again until Izzy learned about the legend.

The Sea Witch is a very powerful witch who is one of the most powerful magical forces in Never Land.; however, overconfidence is her biggest flaw. She is an old rival of the Pirate Princess and holds her in disregard. The Sea Witch is presented as boisterous, mischievous, and rather conceited, a sorceress much impressed with her own power who delights in causing trouble. She is also a somewhat morbid character with a distaste for sunshine and all things wholesome.

The Sea Witch a specialist in dark magic. The main ability she displayed, however, was her ability to turn her victims into solid gold with her broom and later the Shadow Wand. She was also shown to be able to transform into a cloud of smoke to fly about and slip into the Pirate Princess's castle without being noticed. The Sea Witch is also very capable at broomstick flight as her main means of transferring great distances and aiding in combat.

The Sea Witch was first mentioned in the episode "The Pirate Princess". As the story goes, the beautiful Pirate Princess was sailing the Never Sea when a villainous witch attacked her and turned her into gold. After hearing about the legend, pirates Jake, Izzy, Cubby, and their parrot Skully decided to rescue the princess, restoring her true form. Finally reaching the hidden grotto, Izzy uses her pixie dust to free the princess and all is restored but Captain Hook arrives determined to steal the Pirate Princess's golden ship. Luckily Skully made shadows resembling the sea witch, thus scaring off Hook and his crew.

The real Pirate Princess finally appears and tries to zap the Sea Witch with her rainbow wand, which will turn the witch into a good witch. Unfortunately, the rainbow blast misses, and the witch strikes back and uses her magic to blast the rainbow wand out of the princess's hands. Jake and his crew distract the witch while the Pirate Princess retreats to the safety of her room. However, the witch fogs the room with black clouds, confusing Jake and the crew. In the meantime, the Witch heads into the Princess's room via her opened window.

The witch prepares to blast the Pirate Princess right before Jake and his crew arrives with the rainbow wand. Izzy throws over to The Pirate Princess and the latter finally blasts the Sea Witch, transforming her into the beautiful Misty the Wonderful Witch.

In "Misty's Magical Mix-Up!"Jake and his crew pay a visit to Misty's cottage. While entertaining the young pirate Misty accidentally triggering the Shadow Wand reverting Misty back into the evil Sea Witch who plans to turn the Pirate Princess into a gold statue once again. The Sea Witch confronts the Pirate Princess at her palace proving far more powerful then their last encounter against princess and might have succeeded if Jake and his crew had not intervened with Bucky's bubble cannon.

With the witch temporally foiled the Pirate Princess revealed to Jake and his crew that she and the witch grew up together in a faraway kingdom and the witch always pulled tricks on her. Meanwhile the Sea Witch allies her self with Captain Hook and Mr. Smee to distract Jake and his crew while she took care of the princess. The witch prepares to blast the princess and young pirate team with her Shadow Wand Izzy quickly uses her pixie dust on the witch causing her to drop and destroy the Shadow Wand leaving the witch powerless. The Sea Witch confesses the reason she wanted to turn the princess to gold is that she refused to be her friend when they were children claiming the cruel pranks she played on the princess were jokes only to make her laugh. The Pirate Princess forgives the witch for her actions and offered to be her friend once again transforming the witch back into Misty the Wonderful Witch.

While the Sea Witch doesn't appear in the episode "Witch Hook", she is mentioned several times within the episode once Captain Hook discovers her magic mirror within a floating treasure chest turning Hook into a witch.

The Sea Witch is mentioned in the special "Jake and the Never Land Pirates: Battle for the Book". As Captain Hook and his crew search the witch's old lair for treasure. Hook and his crew discover the witch's magic tide pool allowing them to see Michael and John listening to Wendy's stories about Peter Pan outsmarts Captain Hook,much to Hook's anger sick of looking like a bumbling fool, he decides to fly to London, steal Wendy's storybook, and destroy her stories once and for all.

The Sea Witch is mentioned in the episode "Sharky Unchained", as Jake and his crew accompanied by Sharky try to stop a massive shark-like creature known as the Shudder from rampaging on Never Land. The pirates soon trail the beast heading towards the witch's old lair. Fearing the worse the pirate team attempt to stop the monster but were unable to stop it from reaching the witch's magic tide pool. But when the pirate notice that the creature was no longer there and a baby shark was left in its place, they soon notice a message left behind by the witch warning if anyone falls into the magical tide pool they will be cursed into becoming a monster and the only way to reverse the curse is another dip.

The Sea Witch only video game appearance is in the Disney Junior online game "Rainbow Wand Color Quest." during the intro the witch drains all the color of Never Land. And it's up to Jake and his crew accompanied by the Pirate Princess and the powers of her Rainbow Wand to restore colors once more. 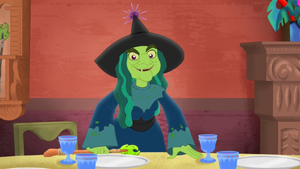 For more pictures and screenshots of The Sea Witch, click here.

Retrieved from "https://jakeandtheneverlandpirates.fandom.com/wiki/The_Sea_Witch?oldid=90445"
Community content is available under CC-BY-SA unless otherwise noted.