Jake and the Never Land Pirates Wiki
Register
Don't have an account?
Sign In
in: Females, Characters, Mermaids,
and 4 more

The mermaids from the novel Peter and Wendy by J.M. Barrie

"Ahoy, handsome pirate!"
The Mermaids are supporting characters from the Disney Junior animated series, Jake and the Never Land Pirates. They are one of the many mystical groups of beings that inhabit the magical island of Never Land.

The mermaids as a whole appear fun-loving, and do not seem to have any real cares or troubles besides Captain Hook. Unlike how they were shown in the original film, the mermaids are sweet, helpful and unselfish.

The mermaids first appeared in the episode "Surfin' Turf", where they can be spotted as Marina giving Izzy surfing lessons, waving as she passes by them. The mermaids do not accompany Marina and Jake and his crew retrieve Izzy's surfboard from Captain Hook.

The mermaids make a cameo with Marina at the end of the episode "Jake's Jungle Groove", attending the dance party held on Pirate Island. In the episode "The Never Night Star" while Jake and his crew are star gazing on Pirate Island Izzy spots a star formation resembling a mermaid.

The mermaids play a larger role in the episode "Undersea Bucky!". When the light of the mermaid dominated Neptune City vanishes, Marina was called forth to find a solution to the problem. Jake and the crew assist Marina in the search for the fallen pink pearl with the aid of Bucky transforming into a submarine to explore the deep of the Never Sea Captain Hook has other uses for the pink pearl.

The mermaids make a brief cameo in the episode "The Mermaid's Song", but play a larger role in the episode "Treasure of the Tides". The Mermaids witness the swimming race with Izzy and Lucille the Seal in Mermaid Lagoon. The Mermaids joined Izzy, Marina and Stormy set off to find the "Treasure of the Tides" Captain Hook order's Sharky and Bones to block the lagoon using the Jolly Roger but the two pirates were no match for Lucille who was able to slip past them and recruit the help of two blue whales to force the Jolly Roger out the way so Izzy and the mermaids could catch up to Hook and Mr. Smee.

While Captain Hook and Mr. Smee tried to keep the lead to the Treasure of the Tides. A large school of seahorses block the greedy Captain Hook path. Thanks to Mr. Smee, Hook was given the idea to keep Izzy and the mermaids at bay spooking the sea creatures toward Izzy and the mermaids so Hook could beat them to the treasure. But Hook didn't count on Izzy's quick wit (like in the episode "The Seahorse Roundup"). Izzy, Marina and Stormy began to sing a lullaby to calm the seahorses down so they could safely pass. Hook and Smee reached Hidden Cove to find the Treasure of the Tides Izzy and the mermaids tried to stop Hook but they were powerless to stop him until Jake, Cubby and Skully reach Hidden Cove with Izzy's pixie dust to turn the tide on Hook and Smee.

The mermaids decide to make Izzy an honorary mermaid. Later that night, they took part in the celebration and the crowning Izzy "Mermaid of the Year". In the episode "Bones' Lucky Doubloon!", Bones tries to prove to Captain Hook that his grandfather's doubloon is lucky, and when he flips it, he receives a kiss from a mermaid.

In the episode "Jake's Royal Rescue", Marina was preparing a show in the honor of Queen Coralie, ruler of the Never Sea and queen of the mermaid's arrival. The other mermaids were rehearsing a dance for Coralie. The Mermaids are last seen at the end of the episode successfully performing in front of the queen, Jake, and his crew.

While the mermaids don't physically appear in the episode "Tick Tock Trap", they are mentioned by Captain Hook as the various victims in his lie to Brewster the Beast Trapper to rid Never Land of Tick-Tock the Crocodile.

Two mermaids make a nonspeaking cameo appearance in the episode "Trading Treasures". The mermaids appear at the end of the episode attending Queen Coralie's Fin and Frolic dance party dancing with Marina.

Two mermaids make a brief cameo in the episode "The Mermaid Queen's Voice". The mermaids were apart of the audience to Queen Coralie duet with Captain Hook

The mermaids make a brief cameo in the episode "Izzy and the Sea-Unicorn". Izzy's new friend Cornica, a magical sea-unicorn, disappears and Jake suggests they ask the mermaids if they knew where to find her. But Queen Coralie and a few of her subject didn't believe Izzy's tale. However, Stormy, was the only one that believed Izzy and decided to accompany Jake and his crew locates Cornica, who has been captured by Captain Hook.

In the episode special "Battle for the Book". As Jake, his crew and the Darling siblings venture through Hangman's Tree's hollowed-out tree root tunnels so they could listen carefully to find which tunnel will lead them to Captain Hook. The first tunnel lead to Mermaid Lagoon and the mermaids could be heard giggling and splashing about from the tunnel.

Two mermaids reappears in the episode "A Royal Misunderstanding" as dancers in Queen Coralie's ballet performances with Marina.But find themselves caught in the middle of a dispute between Queen Coralie and King Crab fortunately Jake and his crew soon arrive to watch both the crabs race and mermaids dance to suggest both Coralie and King Crab share the beach. However, Captain Hook also desired the location for his date with Red Jessica.

The mermaids reappear in the episode "Captain Frost". Captain Hook armed with the magical North Wind Snowflake he stole from Captain Frost arrive at Mermaid Lagoon. Hook threatens to take control of the mermaid's treasure, using the North Wind Snowflake's power to freeze the lagoon allowing the captain to retrieve the treasure. However, this is short-lived once Jake and his crew arrive accompanied by Captain Frost thwart Hook's efforts knocking the treasure back into the lagoon, allowing Marina and the other mermaids to hide it somewhere Hook will never find it.

The mermaids make a brief appearance in the episode "Dancing with Pirates ", as Jake explains to the viewers that even dancing can be a valuable pirate skill.

The mermaids reappears in the Disney Junior online game "Journey Beyond the Never Seas" and in the Sunken Treasure segment. 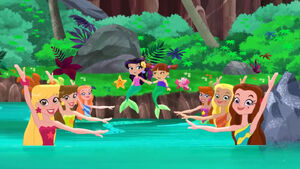 For more pictures and screenshots of The Mermaids, click here.