Sealed behind the golden door once more by Jake and Mr. Smee.

“ There's no treasure up that river.No, sir! Nothing but the Never Land Groogar! ”
―Mr. Smee

The Groogar is a minor character in Jake and the Never Land Pirates. The Googar is a legendary sea monster of giant proportions that is said to be trap behind a golden door within Danger River. His vocal effect are provided by Dee Bradley Baker.

“Isn't that the legendary monster with a hundred giant tentacles?! ”
―Cubby

Not much is known about the Groogar's origins or who defeated the massive monster. But the creature is feared by many who sail the Never Sea. The Groogar is a cephalopod-like beast, with a squid-like mantle, a number of long, suckered tentacles at the base of its head, Some of these were as thick around as a galleon's mainmast. The Groogar was defeated by some unknown force locked away in the cliff wall of Danger River behind a golden door.

“Aye! And tales say that it be trapped in a cave, sealed in by a giant golden door. ”
―Mr. Smee

The Groogar makes his first appearance in the episode of the Nanny Nell, after Nanny Nell shows Hook and his crew various means to keep their vessel in order, Mr. Smee began to believe he wasn't needed and abandoned ship. With the Jolly Roger in ship-shape condition Nanny Nell suggests that they go on a treasure hunt. Captain Hook knew of one treasure that he always desired but was never able to reach located in Danger River. Nanny Nell accompanied Hook and his crew into Danger River to locate a giant gold doubloon embedded in a cliff. Hook and his men tried to force it open but with no luck, it wasn't until Nanny Nell suggests using the Jolly Roger's anchor as a grappling hook to pry it open. Nanny Nell's plan was a success but little did Nell or Hook know the giant gold doubloon was really a door sealing the Groogar (a legendary sea monster) within. Nanny Nell later finds herself within the grasp of the Groogar, and Jake and his friends quickly come to Nanny Nell's aid while Mr. Smee kept the Groogar distracted, dropping Nell into Izzy and Cubby's arms as it tries to capture Smee. With Nanny Nell safe Jake and Smee seal the Groogar back into its prison. 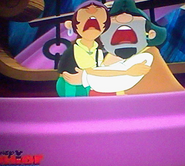 Retrieved from "https://jakeandtheneverlandpirates.fandom.com/wiki/The_Groogar?oldid=84578"
Community content is available under CC-BY-SA unless otherwise noted.