Start a Wiki
The Golden Bell is an object featured in the Jake and the Never Land Pirates series. It's a large gold bell that was formerly hidden deep within the volcanic Island of Bell located far off the shores of Never Land. The Bell was guarded by a fearsome fire breathing dragon.

The Golden Bell first appeared in the episode special Jake and the Never Land Pirates: Jake Saves Bucky. After Jake and his crew sneak aboard the Jolly Roger with Peter Pan help retrieve the other half of the Pirate Code Scroll from sleeping Captain Hook. They learn that if they can retrieve the golden bell, Bucky would be there's once more. The crew set out to the Island of Bell and battled a fire-breathing dragon to obtain said bell. They head back to the Jolly Roger, retrieve Bucky, and all is well.

The Golden Bell only appearance in printed media is the storybook adaption of Jake Saves Bucky.

In the online game "Jake's Heroic Race" Peter and Jake are both playable during the final phase, distracting the dragon from the Island of Bell. This allows Cubby, Izzy and Skully time to locate the golden bell.

The Golden Bell is featured in the "Battle On The Never Sea Disney Junior App Game." the bell's pieces are scattered throughout the stage Jake can collect them among the various objects during his journey and add it to his treasure room. 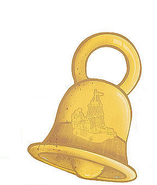 Add a photo to this gallery
Retrieved from "https://jakeandtheneverlandpirates.fandom.com/wiki/The_Golden_Bell?oldid=88795"
Community content is available under CC-BY-SA unless otherwise noted.