To be free of Lord Fathom control

Dreadnaught Cove deep within the depths of the Never Sea

Lord Fathom (as long as he has the DarkLight Emerald

Destroying everything in its path, Its freedom, rampaging, destruction

Dislike being controlled by Lord Fathom

Tricked into sleeping forever sealed away in the Dreadnought Cove.

“ With the Strake at my side, no one will ever defy me again. ”
―Lord Fathom

The Strake is a character in Disney Junior animated TV series Jake and the Never Land Pirates. The Strake is a large, mysterious aquatic creature that inhabits the Never Sea. His vocal effects are provided by Dee Bradley Baker.

“ Yay hey, no way. The Strake is the worst monster ever! No one can control him. ”
―Izzy

The Strake is the most ferocious monster in the Never Sea. Its fangs can crush stones and its scales are harder than steel. The Strake is infamously known for its fierce temper and destructive tendencies. In addition, it is later revealed that the Strake is also notoriously difficult for Lord Fathom to tame even after it served him long ago. Lord Fathom requires an exceptional amount of power from the DarkLight Emerald to tame it until it can obey his will. Even after his imprisonment the Strake is well-known and feared by both pirate and mer-folk alike being said to be "the worst monster ever" by Izzy.

It is currently unknown when Lord Fathom first met the three-headed serpent. Using the power of the DarkLight Emerald, Lord Fathom was able to control the mighty Strake in his first attempt to defeat King Neptune, and would have defeated him if it wasn't for the combined efforts of Neptune and Captain Colossus. While Neptune and Captain Colossus were victorious in beating the Strake, it came at the cost of Captain Colossus becoming weaken and losing his battleship, The Mighty Colossus sinking to the depths of the Never Sea. The Strake was locked away deep within Dreadnaught Cove shortly after.

The Strake first appeared in the episode special The Great Never Sea Conquest. Lord Fathom is released from an underwater prison, and he sets out to take over the Never Sea by awakening the legendary giant, three-headed serpent, the Strake. To deal with this new threat, Jake creates the League of Never Sea Captains: Himself, Captain Hook, Captain Flynn, Captain Frost, and Beatrice Le Beak. The League tries to stop Lord Fathom but he's too powerful. Jake's sword suddenly makes the Mighty Colossus rise out of the water and makes him its captain. Meanwhile, Lord Fathom releases the Strake and places it under his control and a battle erupts. King Neptune appears and tells Jake that all he needs to defeat Fathom and the Strake is to believe in himself. Using the powers of his sword, Jake finally defeats Lord Fathom and the Strake. He then re-imprisons the Strake and destroys the Darklight Emerald, freeing Queen Coralie, Marina, Stormy, and the sea creatures. Lord Fathom and Sinker are last seen in Dreadnought Cove plotting his revenge as he manages to recover a piece of the DarkLight Emerald and swears he'll not just rule the Never Sea but all of Never Land and the lands beyond, but the Strake suddenly roars furiously from behind the stone door of Dreadnaught Cove, sending Lord Fathom and Sinker fleeing in terror once more.

The Strake reappears in the episode "Peter Pan's 100 Treasures!" as the final challenge in Peter Pan's scavenger hunt the captain's most retrieve a gold spotted scale from the Strake who still fast asleep within Dreadnaught Cove.

The Strake reappears in the episode "The Legion of Pirate Villains". Captain Hook attempts to reclaim the lost treasure of the Captain Colossus at Dreadnaught Cove. Mr. Smee pleads with Hook the treasure is not worth the risk of waking the Strake. Hook bellows that he doesn't fear the beast as he enters the Never Sea within his divers suit accidentally knocking the fragment of the DarkLight Emerald Lord Fathom as he plots to wake the Strake once more. While the Strake isn't featured throughout the rest of the episode it is featured as a statue battling Captain Colossus on Colossus Island. Once Jake and his crew meet Captain Colossus they find out he is slowly losing his strength as his body hasn't recovered from his first battle with the Strake. And in his weakened state couldn't recover the keys to his treasure bestowed upon him by King Neptune that will restore his strength.

The Strake only appearance in printed media is the storybook based upon the episode special of the The Great Never Sea Conquest. 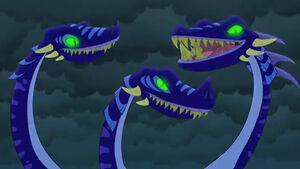 For more pictures and screenshots of Strake, click here.

Retrieved from "https://jakeandtheneverlandpirates.fandom.com/wiki/Strake?oldid=92026"
Community content is available under CC-BY-SA unless otherwise noted.