Having fun, surfing, relaxing, spending time with her sister, making necklaces out of jewels of the Never Sea

Work, Jake and his friends in danger

Mind control through the Mermaid's Song

"Goody-goldfish!"
Stormy is a recurring character from the Disney Junior animated series, Jake and the Never Land Pirates. She is Marina's younger sister. She is voiced by Allisyn Ashley Arm.

Unlike her sister Marina, Stormy is very lazy and somewhat selfish, much like the mermaids from the original Peter Pan film. She was originally rather rude to Jake, Izzy, Cubby, Skully and her sister Marina. To avoid doing work, Stormy would often brainwash others to do the work for her using the powerful siren song called "The Mermaid's Song".

Stormy first appeared in the episode "The Mermaid's Song ", Marina asks Stormy to complete three mer-tasks for an upcoming event. However, Stormy openly refuses but decides to eventually. When Marina departs, Stormy uses the Mermaid's Song to brainwash the treasure-seeking Captain Hook and forces him to find seashells. She then brainwashes Mr. Smee to collect seaweed, and Cubby to collect coconuts. Eventually, Stormy's brief partner-in-crime Snappy the Hermit Crab, would rush off to warn Marina about her sister. When Jake, Izzy, and Skully arrived, Marina quickly informed them of the problem but told the young pirates to clap their hands to wake Hook, Smee, and Cubby from the spell. Marina then demanded Stormy's presence and the culprit mermaid apologized for her actions and Jake and his crew forgive her.

Stormy reappears in "Treasure of the Tide " when the mermaids decide to make Izzy an honorary mermaid. Later that night, she joined the other mermaids when they crowned Izzy "Mermaid of the Year".

In "Izzy's Trident Treasure ", Stormy and Marina asked Izzy for help recovering King Neptune's legendary trident. The map Marina and Stormy found leads to Mount Mer-suvias, a mountain in the middle of a dried-up a lake in the desert. Since the mermaids can't walk on land and only a mermaid can touch Neptune's Trident. Since Izzy was once an honorary mermaid she can touch the trident and walk on land. Jake and his crew set out to find the trident with the two mermaids. They get to Never Land and sail trough Sandbar Straits with the help of Marina and Stormy. Captain Hook sees them and finds that they are looking for the trident. He wants the trident and he says that he is going to take it but the Jolly Roger gets stuck in the sandbar so he has to use a rowboat. Jake and his crew have to use a rowboat because of the thin canal but to current is too strong for them so they need Marina and Stormy to help them. Marina and Stormy accompany Jake and his crew getting through the strong currents.

Stormy reappear in the Halloween episode "Tricks, Treats and Treasure!" as Jake and his crew first stop during their trick or treating. Like the rest of the characters in the episode, Stormy was in a Halloween costume. She was dressed as a witch.

Stormy appears again in the episode "Cubby's Pet Problem " she joins Jake and his crew exploring the wonders of the Never Sea when the puny pirate team encountered a baby sea serpent at the Cave of Neptune. Stormy gives the baby sea serpent the name Slink. Stormy leaves the group when she hears her sister's bell calling her for snack time. Stormy later returns in the episode when Cubby sneaks aboard the Jolly Roger to rescue Slink from Captain Hook she brings Slink's Mother to aid in the rescue.

Stormy and Marina make a brief nonspeaking cameo appearance in the episode "Captain Who?" The young mermaids present the amnesia striking Captain Hook a large clam with a huge pearl inside in hopes of restoring Hook's memory but it fails.

Stormy and Marina reappear in the episode "Sandy and the Clams" taken part in the concert held by Sandy the Starfish and his singing clam trio at Mermaid Lagoon.

Stormy and Marina reappear in the episode "Jake's Never Land Rescue". While following the ball of light sent by the Guardian, Jake ends up at Mermaid Lagoon. Jake runs into Marina, Stormy, and Sandy the Starfish, and the threat of Never Land disappearing has even effected the mermaids of Neptune City, forcing them to flee. Jake asked Marina and Stormy if they knew of a means to restore Cubby's map, the young mermaids told him that only the magical ink of the Golden Squid was capable of doing so. To reach the Squid, the young mermaids summoned Flo the Dolphin to escort Jake through the depths of the Never Sea.

Stormy reappears in the episode "Jake's Royal Rescue" rehearsing a song with Snappy the Hermit Crab and Sandy in Queen Coralie honor held at Hidden Cove. After Queen Coralie is rescued by Jake and his crew from Captain Hook and return to Hidden Cove, Stormy can be spotted successfully singing with Snappy, Marina, Sandy and the mermaids.

Stormy returns in the episode "Izzy and the Sea-Unicorn", Izzy's new friend Cornica, a magical sea-unicorn, disappears and Jake suggests they ask the mermaids if they knew where to find her. But Queen Coralie and a few of her subjects didn't believe Izzy's tale, due to sea unicorns being a creature of mermaid folklore. However, Stormy was the only one to believe Izzy and decided to accompany Jake and his crew to locate Cornica, who has been captured by Captain Hook and his crew.

Stormy and Marina makes a non-speaking cameo in the special "Jake and the Never Land Pirates: Battle for the Book".Peter Pan defends the mermaids when a sea beast enters Mermaid Lagoon.

Stormy and Marina reappear in the episode"The Tale of Ratsputin". While swimming near an old shipwreck the mermaids believe they witness Ratsputin, a mysterious giant bilge rat. Jake and his crew team up with Brewster the Beast Trapper to try and capture Ratsputin.

Stormy and Marina reappear in the episode special "The Great Never Sea Conquest". When the evil Mer-wizard named Lord Fathom is released from an underwater prison, he sets out to take over the Never Sea. Lord Fathom tricks the mermaid in revealing the location of the DarkLight Emerald the source of Lord Fathom's power. Using the powers of his sword, Jake finally defeats Fathom and the Strake. He then re-imprisons the Strake and destroys the DarkLight Emerald, freeing Queen Coralie, Marina, Stormy, and the sea creatures.

Stormy and Marina makes a brief reappearance in the episode"The Island of Doctor Undergear", with the threat of the lava flow from Belch Mountain reaching Mermaid Lagoon, Stormy and Marina are sent fleeing to safety by submerging beneath the Never Sea.

While not having anything to do with the plot of the episode Stormy makes a brief cameo appearance in "The Legion of Pirate Villains" During the post-credits Stormy, Marina and Queen Coralie are seen waving at Jake and his friends as the Mighty Colossus sail past them.

Stormy, Marina and Queen Coralie make a brief appearance in the printed media is the storybook adaption of Battle for the Book. When Peter Pan comes to the mermaid's assistance dealing with a large sea monster that has entered their lagoon.

Stormy reappears in the storybook adaptation of the episode special The Great Never Sea Conquest.

Stormy makes a brief appearance in the Disney Junior online game "Jake's Never Land Rescue Game" during the cut-scene when Jake need to find the magical ink of the Golden Squid to restore Cubby's Map. 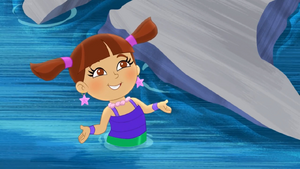 For more pictures and screenshots of Stormy, click here.

Retrieved from "https://jakeandtheneverlandpirates.fandom.com/wiki/Stormy?oldid=92078"
Community content is available under CC-BY-SA unless otherwise noted.