Mr. Crab (refereed to by Izzy)

Playing, swimming freely through the Never Sea, helping his friends,

“ Look, a hermit crab! He tickled me. The shell is his home.”
―Izzy

Snappy is a character from the Disney Junior series Jake and the Never Land Pirates. He's a little hermit crab with a pink, purple-spotted shell. He is also good friends with Marina and Stormy. His vocal effects are provided by the late Russi Taylor.

Snappy first appeared in the episode "The Old Shell Game" Izzy finds a pink polka-dotted shell washed onto Pirate Island beach, she decides to put it on display in her shell collection. However Captain Hook, sees Izzy's shell, and decides to keep it for himself, to add it to his shell collection. Hook manages to steal it from the sea pups. Jake and his crew quickly climb aboard Bucky and heads off after Hook. Jake decides to first ask Hook nicely to return the shell, but Hook tells them that he will never give it back. Mr. Smee notices that the shell is missing, and both pirate groups find that it’s floating on a log in the Never Sea. As it travels through a group of rocks, both ships have to avoid the rock formations, but Jake’s ship. Bucky sets up a raft allowing the young pirates to pass safely through the rocks. Captain Hook and Smee give chase with the rowboat for the shell. Jake and the group manage to beat Hook to the shell, just barely, only to find the seashell has moved to a high cliff. Skully manages to claim the seashell from Hook, but Hook is able to nab it in the end, only for the shell to pinch him. Izzy finally manages to get her shell from Hook after using her Pixie Dust to fly everyone back to Pirate Island, Izzy soon learns that there’s a hermit crab living in the shell. Izzy allows the crab to keep his shell as she set him free back into the Never Sea.

The Hermit Crab would later return in the episode "The Mermaid's Song" also in the episode the crab's name was revealed as Snappy. He tags along with Stormy the mermaid as her brief partner-in-crime while the young mermaid uses the power of the "Mermaid's Song" to hypnotize Captain Hook, Mr. Smee and Cubby. Snappy the Hermit Crab would later rush off to warn Marina about her sister abusing the power of the mermaid song.

Snappy makes a brief cameo in the episode "Captain Who?" as Jake and his crew try to restore Captain Hook's memory they presented the captain with a treasure chest along with but the amnesia striking Hook couldn't care less for the riches and just give the little crab a hug before the crew tried something else to restore Hook's memory.

Snappy makes a brief appearance at the end of "Treasurefalls!" retrieving Cubby's lost Skull-N-Bones marble from the bottom of the Never Sea and returns it back to Cubby.

Snappy reappears in the episode "Jake's Royal Rescue" rehearsing a song with Sandy the Starfish and Stormy in Queen Coralie honor held at Hidden Cove. After Queen Coralie is rescued by Jake and his crew from Captain Hook and return to Hidden Cove Snappy can be spotted successfully singing with Sandy, Marina, Stormy and the mermaids.

Snappy makes a brief cameo appearance in the episode "Sleeping Mermaid" during Queen Coralie musical number expressing her love of the wonders of the Never Sea to Marina, Jake, and his crew. Snappy can be spotted among the various sea creatures listening to Queen Coralie's song.

Snappy makes a brief appearance in the episode "Jake's Awesome Surprise", as Captain Hook samples the various food for Jake's party he accidentally picks up Snappy who quickly pinches Hook to defend himself from being eaten.

Snappy only appearance in printed media is the storybook Jake and the Spyglass. While searching for treasure on Pirate Island beach Captain Hook and Mr. Smee spot something shining in the water. Hook quickly orders Smee to hand him his spyglass, however, Smee believes he'd left it on the rowboat and can't quite recall where they left it. Meanwhile Jake and his crew decide to go for a swim leaving Jake's Spyglass on the beach. Captain Hook attempts to steal it using his fishing-pole hook but during his second attempt to swipe the sea pup's spyglass he accidentally hooks a pink purple-spotted seashell. Snappy soon emerges from his shell and quickly pinches Hook on his nose.

Snappy is featured alongside Jake, Izzy, Cubby, the Never Bird,Blinky and a Never Dolphin on the cover of one of the issues of Disney Junior Magazine. 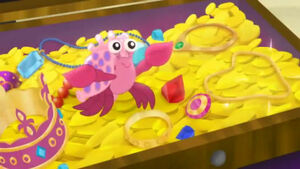 For more pictures and screenshots of Snappy the Hermit Crab, click here.

Retrieved from "https://jakeandtheneverlandpirates.fandom.com/wiki/Snappy_the_Hermit_Crab?oldid=91003"
Community content is available under CC-BY-SA unless otherwise noted.