Cave of Neptune deep within the depths of the Never Sea

Being separated from his mother and friends,Captain Hook

Slink is a minor character from Jake and the Never Land Pirates. He is a rambunctious baby sea serpent who lives with his mother deep within the Never Sea. His vocal effects are provided by the late Russi Taylor.

Despite only meeting both Stormy and Jake's pirate team for a short time. Slink is very fond of them, leaving the safety of the depth of the Never Sea to follow the young pirates to their island hideout.

Like all children Slink is playful and fun-loving. Slink has a tendency to run off and is quite slippery on land or sea. Slink is shown to be very fond of Cubby and enjoys playing fetch giving the young serpent more of dog-like personally. And once Slink is reunited with his mother he was sad that he had to leave his new pirate friends. Cubby reassures him they will meet again and gives him the stick that they played with as a parting gift.

Slink first appeared in the episode "Cubby's Pet Problem" while Stormy was showing the wonders of the Never Sea to Jake and his crew when they reached Cave of Neptune. They spot a giant sea serpent shadow emerging from the cave much to the young pirates surprise a baby sea serpent appears before the pirates. Stormy decides to call him Slink much to the young serpent delight. Stormy soon hears her older sister signaling her that is was lunchtime and soon parts with Jake and his crew. Jake and friend also decide to return to Pirate Island not wanting anger Slink's Mother. Jake and his crew wave goodbye to their new friend much to Slink's disappointment. Later it was revealed that Slink took a liking to the puny pirate crew that he followed them back to Pirate Island much to their surprise. They chase after the baby sea serpent all over the island until they manage to capture Slink by playing his favorite game, fetch. While Jake, Izzy and Skully prepare Bucky to find Slink's mother, leaving Slink in Cubby's care, Sharky and Bones kidnap Slink for Captain Hook, who plans to use Slink as the main attraction of his seaside petting zoo. Quickly leaping into action, Cubby sneaks aboard the Jolly Roger to rescue Slink, succeeding with the aid of Jake, Izzy, Slink's mother, and a bit of pixie dust. With Slink safe and reunited with his mother, Cubby says goodbye to his new friends. Slink was sad to leave his new friend, but Cubby assured Slink that they'll see each other again and gives him a stick from their game of fetch as a keepsake much to the baby sea serpent's amusement. Slink is last seen with his mother returning back to depths of the Never Sea as Jake and his crew bid them farewell. 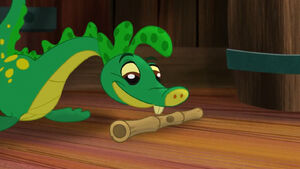 For more pictures and screenshots of Slink, click here.

Retrieved from "https://jakeandtheneverlandpirates.fandom.com/wiki/Slink?oldid=88759"
Community content is available under CC-BY-SA unless otherwise noted.