Being on Lord Fathom's bad side, The Strake

Last seen chased away by the creatures of the Never Sea with his master. Later sent fleeing in terror with Lord Fathom when they hear the Strake roaring from behind the stone door of Dreadnought Cove.

More, yes! More you shall have!
To Dreadnaught... Whoa! Dreadnaught Cove?
No, no, no, but that place is the most dreadful spot in the Never Sea and...
I've never left your side.
It's him! Him!
But-but-but the last time you tried to do that, you failed miserably!
So says the stupendous and tyrannical Lord Fathom, soon to be Ruler of the Never Sea!
Actually, he's about to be known as King Fathom, Ruler of the Never Sea!
Wha... The Strake? Are you sure about this?

Sinker is a character from the Disney Junior series Jake and the Never Land Pirates. He is a small anthropomorphic yellow squid that serves Lord Fathom as his henchman. He is voiced by Jim Rash.

Sinker is a somewhat timid and cowardly henchman. Oddly enough, he has no problem expressing his fear and opinions in front of his master Lord Fathom (although he usually gets dismissed just as quickly). Sinker compliments his boss often, but also says things that make Lord Fathom somewhat irritated. (For example: reminding Lord Fathom how he "failed miserably" the first time he tried to take over the Never Sea, and constantly trying to convince Lord Fathom not to head for Dreadnaught Cove.) Sinker is noticeably the only creature of the Never Sea that serves Lord Fathom, without being controlled by the DarkLight Emerald.

Sinker first appeared in the episode special "The Great Never Sea Conquest". He was fast asleep next to the cave, when Captain Hook's ship anchor get caught on the boulder those releasing Lord Fathom from his underwater prison. Sinker soon greets his master who soon reveals to his squid that he plans once again to take over the Never Sea heading for Neptune City. Lord Fathom tricks Queen Coralie into helping him get the DarkLight Emerald and then imprisons her, Marina, and Stormy and takes over Neptune City.

Before her capture, Queen Coralie sends Sandy the Starfish to find Jake and his friends for help, while Fathom begins taking control of the various sea creatures in with the power of the DarkLight Emerald. Jake and his crew head to Neptune City while Lord Fathom heads toward Dreadnaught Cove. Meanwhile, Captain Hook still desperate for treasure orders his crew to search the Never Sea filling it with nets. Soon Lord Fathom confronts Hook with Sinker on his shoulder. He then orders the captain to remove the nets from his sea but Hook refuses to take orders from "fish". Lord Fathom now angry decides to flood Hook's ship, but Jake and his crew were sailing nearby and come to Hook's aid. Lord Fathom then mentions releasing the Strake, something that Sinker wasn't very fond of. Sinker questions his master and claims the beast is unstoppable. Lord Fathom claims he cherishes the word "unstoppable", and after a heated talk with Jake's crew, and an attempt by Hook to steal the DarkLight Emerald, Lord Fathom decides to send their ships away. Sinker rigorously compliments Lord Fathom on this, and Lord Fathom comments after saying, "Oh Sinker, I can only stand so much flattery." before they swim to Dreadnaught Cove to release the Strake much to Sinker's dismay. When Jake manages to take the DarkLight Emerald, Lord Fathom orders Sinker to retrieve his Emerald. Sinker reluctantly does as his master orders, but the squid is quickly thwarted by Jake who sends him sniveling back to Lord Fathom's shoulder after firing a magical blast from the Mighty Captain Sword. As Sinker cowers on Lord Fathom's shoulder, the mer-wizard comments that the squid needs a "backbone", and Sinker exclaims that "I don't have one!". After Lord Fathom and Sinker are defeated they get chased away by the various creatures of the Never Sea. Lord Fathom and Sinker are last seen hiding in Dreadnought Cove when Lord Fathom reveals to Sinker he managed to recover a piece of the DarkLight Emerald and swears he'll not just rule the Never Sea but lands beyond. Sinker compliments Lord Fathom, and they both snicker for a short time, until the Strake suddenly roars furiously from behind the stone door of Dreadnaught Cove, sending Lord Fathom and Sinker fleeing in terror once more.

Sinker reappears in the episode "The Legion of Pirate Villains" as he joins Lord Fathom as they enter Dreadnaught Cove once more to wake the Strake from his slumber, but as Fathom tries to use the DarkLight Emerald's power it gets knocked out of his hand by Captain Hook entering Dreadnought Cove in search of Captain Colossus's treasure. Hook is then snagged in a fishnet by the Grim Buccaneer believing he captured Lord Fathom. Sinker is last seen questioning what happened as Lord Fathom realizes the DarkLight Emerald is floating away. Lord Fathom bellows for Sinker to help him recover the DarkLight Emerald fragment caught in the ocean current as the villainous duo chase after it.

Sinker only appearance in the printed media is in the storybook adaption of the special The Great Never Sea Conquest.

Sinker is featured in the Disney Junior App game "Battle On The Never Sea." He appears as a mini-boss during Jake's quest. He will toss various objects from the safety of the ship's mast until he runs out of things to hurl at Jake and runs away. 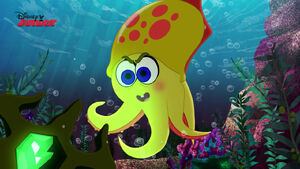 For more pictures and screenshots of Sinker, click here.

Retrieved from "https://jakeandtheneverlandpirates.fandom.com/wiki/Sinker?oldid=92043"
Community content is available under CC-BY-SA unless otherwise noted.