Pirate/Sorcerer
Member of the Legion of Pirate Villains

To turn Never Land into his frozen domain

Ice, making ice, snow, and everything related to cold

Everything related to heat, warmth

" A little deep freeze might change your mind!"
"What's this? More bothersome Never Landers?"
"Be freezed!"
"I work alone."
"This has been fun, but Never Land's my home now and you're not welcome!"
"Why you little warm-blood!"
"How about an unexpected cold snap!"
"Now, for the Final Freeze!"
"The only thing standing between me and Never Land is you, Jake!"
"I'll be back, and colder than ever!
Snow blast!

“Soon, my enchanted ice will cover all of this detestable Never Land. It will at last be my frozen domain!”
―ShiverJack

ShiverJack is a recurring antagonist from the Disney Junior series Jake and the Never Land Pirates. He is the scurvy pirate sorcerer who wants to turn Never Land into his own personal icy domain. He is voiced by Mark Hamill.

“I've read about him. ShiverJack is a cold-hearted sorcerer.”
―Izzy

As it was briefly mentioned in his debut, ShiverJack once attempted to take over Never Land once before but was defeated by some unknown force. After his first defeat, he swore he'll return once more. ShiverJack is quite known, and feared by the various inhabits of the island for his wicked nature and great power.

ShiverJack is true evil and a greater threat to the island than even Captain Hook. He is ruthless and devious and will do whatever it takes to achieve his evil goals (to turn Never Land into his icy domain). Additionally, he is very sinister, which is shown by taunting Jake and his crew when they first meet. ShiverJack thinks himself above everyone, unleashing the full brunt of his wrath with a smile. A sign he relishes in the pain of others. This is displayed during his confrontation with Jake and his crew before heading to Skull Rock.

“Now to put you all on ice, for good!”
―ShiverJack

ShiverJack has complete control over cold temperatures and the element of ice and snow (also known as cryokinesis and frigokinesis). With his abilities, ShiverJack can conjure up and shape various things from solid bolts of lightning made of ice to blizzards. Most of his powers are unleashed and conducted by his trident. This includes, but is not limited to, throwing solid bolts of lightning made of ice, turning water into ice, flash freezing his enemies, and the ability to onset wintry weather on cue.

ShiverJack makes his first appearance in the episode of the same name as the main antagonist, while Jake and his crew where planning to watch Belch Mountain erupt, the volcano miraculously froze before their eyes. While investigating the scene, Jake and his crew spot Captain Frost's ship the Winter Hawk and discover Frost trapped within a cage of ice. After his release, Captain Frost soon explains that the wicked pirate sorcerer ShiverJack has returned. Suddenly, ShiverJack reveals himself from a gust of icy wind, determined to freeze Never Land once more. When Jake protests that Never Land will never belong to the pirate sorcerer, ShiverJack attempt to freeze Jake and his crew, but they manage to dodge the blasts. Unfortunately, Bucky wasn't as lucky and got frozen solid. ShiverJack soon set his eyes on the rest of the island, leaving Jake and his crew to come up with a plan to stop him. ShiverJack later resurfaces during Captain Hook and his crew treasure hunt much to the fright of Hook's bumbling crew, who tried to flee, but were frozen solid by ShiverJack's icy wrath. In order to avoid the same fate as his crew, Captain Hook attempts to reason and tries to join forces with ShiverJack. This is short-lived as ShiverJack claims he works alone, freezing Hook solid in the mere sentence before continuing molding the rest of the island in his frozen image. ShiverJack soon confronts Jake and his mateys once more this time freezing both Izzy, Cubby and Captain Frost in the process leaving Jake alone to deal with the ice elemental, assured of his victory ShiverJack plunge his trident in the frozen ground sending Jake plummeting to his doom before heading off to Skull Rock. Little did ShiverJack know Jake manage to reach Izzy's pixie dust pouch just in time and soon confronts ShiverJack at Skull Rock, ShiverJack attempts to freeze Jake but the magic of Jake's sword proved too powerful even for ShiverJack's trident. A short battle between both pirates begins ShiverJack manages to knock Jake's sword away, believing he has truly won ShiverJack transforms Skull Rock into his icy throne. This is short-lived as Skully has return with Captain Flynn who has a magical orb containing the Never Winds of Marlagoth which has the power to melt even ShiverJack's enchanted ice. Jake load the orb into the cannon aboard Flynn's ship and fires it on ShiverJack weakening both the ice elemental and reverting his ice magic from Never Land. ShiverJack is last seen as Jake cast him out of Never Land but before leaving, ShiverJack acknowledges Jake as his only threat and swears he'll return once more, colder than ever, before vanishing.

ShiverJack reappears in the episode "Jake's Cold-Hearted Matey ". He was busy coming up with the perfect spell to rid himself of Jake and his crew once and for all that he ignored his nephew ChillyZack who wanted to spend time with him. However, Zack came up with his own idea to get rid of Jake and his crew, believing the pirates to be evil in order to win his uncle's approval. During his time with the pirate crew however, he learned that they were not the villains that his uncle claimed them to be. ShiverJack stumbles upon Zack when he accidentally captured Jake and his crew and was delighted by Zack's handy work. ShiverJack then summons a giant snake made of ice and snow that took him all night to find. ShiverJack is later defeated by ChillyZack using his icy magic he learned. He swears he'll have revenge on both his nephew and Jake as he and is icy minions are sent flying by Izzy's Pixie Dust. ShiverJack is last seen soaring over the waters of his ice palace FrozenGuard when the Pixie Dust wears off sending ShiverJack and his minions plummeting into the Never Sea only to be chased back to his lair by a school of Never-Sharks.

ShiverJack reappears in the episode "The Legion of Pirate Villains". He is first seen awakening his minions the Snow Mugs who have fallen asleep at there post and ordering them to get back to work when he is abducted by the Grim Buccaneer. When ShiverJack awakens he is seen in a holding cell alongside Captain Hook and Doctor Undergear arguing about who brought them here. Grim soon reveals himself to the other villains as he wishes to join forces as a Legion of Pirate Villains to uncover Captain Colossus's magical treasure before Captain Jake and his mates find it. ShiverJack alongside the other villains agrees to join forces, only until they find the treasure and plot to betray them to claim the riches for himself. At the end of the special ShiverJack, Grim and Undergear are left stranded in the middle of the Never Sea on a tiny raft being chased by Tick-Tock the Crocodile after there defeat by Captain Jake and Captain Colossus.

ShiverJack makes a cameo appearance in the episode "Captain Hook's Last Stand! ", during the closing musical number as Peter Pan and Jake soar past FrozenGuard when they are attacked by ShiverJack. However, the hero's manage to quickly thwart the ice wizard as they trick him into freezing himself in his own enchanted ice. 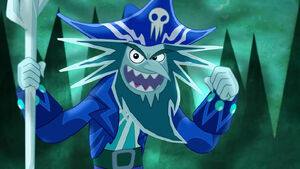 For more pictures and screenshots of ShiverJack (character), click here.

Retrieved from "https://jakeandtheneverlandpirates.fandom.com/wiki/ShiverJack_(character)?oldid=92047"
Community content is available under CC-BY-SA unless otherwise noted.