The Shark Sword is a shark-shaped sword created by Doctor Undergear in the Disney Junior series Jake and the Never Land Pirates. 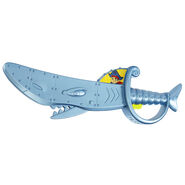