"The Legion of Pirate Villains"

Teeth
The Shark Ship is a minor character in the series Jake and the Never Land Pirates. It is a robotic shark-like ship created by Doctor Undergear to assist him in retrieving various equipment from the bottom of the Never Sea.

Not much is currently known about the Shark Ship or when Doctor Undergear created the vessel. As one of the various mechanical minions at Undergear's disposal, the Shark Ship helps selvages various metals from the depths of the Never Sea. It can also be quite the formidable foe when ordered to attack, not giving up the chase until its orders are complete.

Displaying little to no personality of its own, the Shark Ship is silent, single-minded and unquestioningly dedicated to Undergear's orders.

The Shark Ship is a very durable robot, remaining unflinched by the various attacks on the Mighty Colossus. Thanks to is size, the Shark Ship is incredibly strong, capable of toppling vessels with its powerful jaws.

The Shark Ship first appeared in the episode "Shark Attack!", Jake stumbles upon the Shark Ship while exploring the depths of the Never Sea trying to uncover the various shark-like activity while sailing the Mighty Colossus. While taking a closer look Jake discovers various scrap metal within the ship's mouth. Jake is later confronted by Undergear who reveals he was looking for parts to make new minions. Undergear soon marvels at the very size of the Mighty Colossus and decide to take the ship for himself and use its various arts to create more robotic minions. The Shark Ship is later destroyed when it collides with the giant Crab Bot trying to catch Izzy and Cubby who was distracting the robots, allowing Jake to confront Doctor Undergear.

The Shark Ship makes a brief reappearance in the episode "The Legion of Pirate Villains" Undergear and the other villains use the Shark Ship to follow the Mighty Colossus to Never Land and later to Colossus Island. 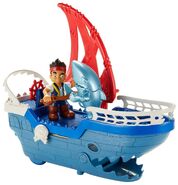 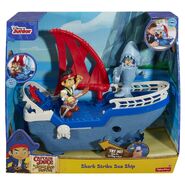 Retrieved from "https://jakeandtheneverlandpirates.fandom.com/wiki/Shark_Ship?oldid=92037"
Community content is available under CC-BY-SA unless otherwise noted.