To Take Peter Pan's Shadow to the Shadow World

Destroyed by a brilliant flash of light.
Shade the Shadow Pirate is a minor antagonist featured in the Disney Junior series Jake and the Never Land Pirates. He is a wicked shadow from the Shadow World that comes to Never Land to steal the shadows of others. He is voiced by Fred Tatasciore.

Shade's past is mostly unknown, though he mentioned as being the ruler of the realm of shadow known as the Shadow World. As it was briefly mentioned in his debut, Shade once attempted to take over Never Land once before but was defeated by Peter Pan. Shade's motivations is to be the most powerful being in Never World, dominating the shadows of the islands various inhabitants. However, as evidenced by Izzy's knowledge and distaste for him, Shade has an infamous reputation around Never Land and is a feared figure in the eyes of its inhabitants.

Shade is a scheming pirate shadow, driven mostly by greed and the desire to have authority over others; more specifically, Peter Pan's Shadow. Shade is an opportunist and can be quick to concoct schemes that would likely end in his favor. After overhearing Peter Pan's Shadow flying about solo, Shade was able to quickly concoct an elaborate plot—one of which that could have very well succeeded, if not for unexpected interference's.

Shade is also cruel, remorseless and sadistic. He apparently has no qualms with terrorizing innocent civilians as a means to reach his own goals and often relies on manipulation achieve said goals.

Shade first appeared in the episode Pirate Fools Day! as the main antagonist of the episode. Peter Pan's Shadow is running amok pulling pranks on the various inhabitants of Never Land on Pirate Fools Day. Shade spots Pan's Shadow mischief, and with Peter nowhere in sight, Shade took great delight at this opportunity he's been waiting for to capture Pan's Shadow and bringing it to his Shadow World. Shade manages to track Pan's Shadow to Never Land where he took the form of Jake and his crew to lure Pan's Shadow close enough so he can capture him with magic Shadow Bag. Luckily Jake and his crew manage to catch up and confront Shade but as they try to stop the shadow pirate, but the young pirate's many attempts merely phase through the wicked shadow. Shade mocks Jake and his friend pointless efforts before fleeing back to his ship with his captive. As Shade made his way back to his ship near Shipwreck Beach he is confronted once more with Jake and his crew with the assistance of Brightly the Firefly and his swarm. While Shade flees from the swarm of fireflies, Jake and his try another to rescue Pan's Shadow but even amongst the chaos, Shade refuses to give up his captive. It wasn't until Peter Pan arrives to turn the tide of the battle with Peter plan, Jake manages to distract Shade acting like his shadow has to escape, Shade was tempted to try to catch Jake's shadow, allowing Peter to sneak behind Shade using his dagger he manages to rip a hole in Shade's magic bag freeing his shadow. Shade tries to capture but seeing that it vanish and revealing it was still attached to Jake he became furious being tricked and witness Peter and his shadow reunite. Shade tries one last attempt to recapture Pan's Shadow but efforts where in vain do to Peter cutting a hole in his magic bag. Peter decides it's time to finishes this up by asking Brightly and his swarm to light Shade through the inside causing the evil shadow to explode in a brilliant flash of light. Presumably ending Shade rain of terror. 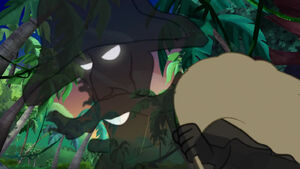 For more pictures and screenshots of Shade the Shadow Pirate, click here.

Retrieved from "https://jakeandtheneverlandpirates.fandom.com/wiki/Shade_the_Shadow_Pirate?oldid=89967"
Community content is available under CC-BY-SA unless otherwise noted.