The Sea Scuttlers are three min submarines within Submarine Bucky. They allow Jake,Izzy and Cubby the means of exploring the wonders of the Never Sea and get through more narrow underwater passage much faster then they could with Bucky.

The Sea Scuttlers first appeared in the episode "Cubby's Pet Problem " Jake and his crew accompanied by Stormy explore the wonders of the Never Sea when the puny pirate team encountered a baby sea serpent they've named Slink.

The Sea Scuttlers reappeared in the episode "Izzy and the Sea-Unicorn", after Captain Hook captures Cornica in order to locate the legendary Sea-Unicorny treasure.Hook attempt to tame the sea-unicorn but she quickly bucks off the greedy captain.Not letting the beast stand in his way for treasure Hook ties Cornica up on top the Squidailus and threatens to take away Cornica's friendship necklace Izzy gave her if she doesn't lead him to the treasure.Fortunately Jake and his crew accompanied by Stormy quickly follow Hook and his crew beneath the wave in their mini subs to the Coral Tunnel.

The Sea Scuttler is featured in the Disney Junior online game "Journey Beyond the Never Seas" Sunken Treasure segment.Jake uses to uncover the Mermaid's Treasure and return to the surface while dodging various sunken objects and the Golden Squid. 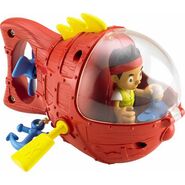 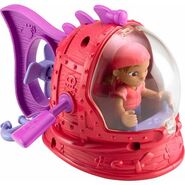 Add a photo to this gallery
Retrieved from "https://jakeandtheneverlandpirates.fandom.com/wiki/Sea_Scuttlers?oldid=90368"
Community content is available under CC-BY-SA unless otherwise noted.