The Coral Cove in Never Land

Being with Marina,singing,performing for others

Captain Hook spoiling his and his friends' fun

“ I'm glad you like Sandy's song. Cause he loves to sing it all the time.”
―Marina

Sandy is a recurring character from the Disney Junior series Jake and the Never Land Pirates. He is Marina's pet starfish. He is voiced by Loren Hoskins.

How Sandy met Marina and origins all together are currently unknown. What is known as the two clearly have a strong bond. Marina is very fond of the Sandy, who usually accompanies her through the depths of the Never Sea.

Sandy is generally carefree and fun-loving, especially when dealing with his most-beloved profession: singing. He can be so high-spirited, in fact, that it can sometimes overwhelm as Marina revealed during Sandy's debut he likes to sing all the time.Sandy singing also had healing properties during his debut.

Sandy first appeared in the episode "Jake's Starfish Search", where Marina asks Jake, Izzy and Cubby to watch the starfish while she goes to her undersea ballet class. No sooner then Marina departure to her class Captain Hook swipes Sandy away from the sea pups claiming the starfish song could heal his injuries as he and Mr. Smee flees into the brush of the Never Land Jungle. Just as Hook wishes Sandy's song can heal his injuries, Jake and his crew soon track Hook and Smee to Hook's hidden treasure cave on Never Land, but Hook had planed for the young pirates arrival leaving a web like vines blocking the entrance. However Jake and his crew discover a flaw with Hook's trap and manage to slip pass into Hook's hidden treasure cave. Captain Hook over hears that his plans have failed and decides flee, but forgets about his trap that he set for Jake and crew. Hook and Smee find them ensnared within the web bouncing deeper into Never Land jungle until they are launched by a palm tree landing in Curvy Path Hills.

Jake and his crew soon reach the hills with the assistants of Cubby's map. Jake and his friends knew which path to take to catch up to Hook. Hook and Smee soon hear Jake and his friends have caught up with them and decide flee yet again until he and Mr. Smee find themselves deep within Tiptoe Pass. The slightest noise will cause the massive towers of coconuts to tumble down. Hook tries to prevent Sandy form singing by stuffing him under his hat as he creep through Tiptoe Pass with Jake and his crew in pursuit. But as Hook and Smee try to slip through Tiptoe Pass, Sandy starts to squirm underneath Hook's hat. As the captain tries to keep the starfish from moving, the large feather on his hat tickles Smee's nose, causing him to sneeze loudly and the towers of coconuts to rain down upon them. Jake points out the emergence Izzy leaps into action using her pixie dust on everyone rescuing from the falling coconuts. Jake quickly swoop over to Captain Hook recovering Sandy from his hat. Hook orders Jake to return the starfish to him at once. Jake refuses informing the greedy captain that he and crew will return Sandy back to Marina before warning Hook to move out the way. Hook merely laughs at Jake's words, but soon he is swarmed by a flock of passing ducks which removes the pixie dust, sending Hook plummeting into one of the coconut towers. Smee quickly flies down to his captain, who emerges form the pile of coconuts in pain. Hook asks Smee to sing the boo-boo song to heal him,which Smee promptly does. With Hook no longer a threat Jake and his crew fly back to Pirate Island where Marina was waiting for them worried. Jake and his crew explain the whole ordeal to Marina. With her pet safely back in her arms, Marina thanks Jake and his crew for saving Sandy.

Sandy reappears in the episode "Save the Coral Cove!" overhearing Captain Hook's plot to destroy the Coral Cove with his treasure digging machine in search of the "Treasure With Eight Arms" Marina and Sandy swim to Pirate Island to enlist the help of Jake and his crew to stop Hook and Save the Coral Cove.

Sandy reappears in the episode "Pirate Rock!", Marina overhears Jake, Izzy, and Cubby singing and suggest they hold a pirate rock and roll concert held at Pirate Rock. Sandy was among the various friends Marina invited to Jake's concert.

In the episode "It's a Winter Never Land!", Sandy also attended Jake, Izzy and Cubby's holiday celebration. He was even used as the star atop of the Forever Green Tree.

In the episode "A Feather in Hook's Hat" Sandy makes a brief appearance singing with the The Sing-Songbird. In the special Jake and the Never Land Pirates: Jake Saves Bucky Sandy the Starfish served as a clue during the race between Bucky and the Jolly Roger.

Sandy attended Jake's birthday celebration with the rest of the pirate teams Never Land friends in "Jake's Birthday Bash!" Sandy makes a brief cameo in the episode "Ahoy, Captain Smee!" while Mr. Smee is left in command of the sinking Jolly Roger Jake and crew decided to help Izzy used her Pixie Dust to lift the Jolly Roger from the Never Sea allowing Smee to fill in the hole Sandy can be spotted while the water flowing out of the hole of the Jolly Roger.

Sandy makes a brief reappearance in "Ahoy, Captain Smee!" falling out of the Jolly Rodger with all the spilling water after Izzy uses her pixie dust to stop the sinking ship from sinking any further.

Sandy makes a brief reappearance with Stormy and Marina in the episode "Jake's Never Land Rescue". While following the ball of light sent by the Guardian, Jake ends up at Mermaid Lagoon. Jake runs into Marina, Stormy, and Sandy, Jake informs them he is on a quest to stop the threat of Never Land disappearing. However Marina and Stormy inform Jake that effect of Never Land disappearing is spreading to Neptune City, forcing them to flee. Jake asked Marina and Stormy if they knew of a means to restore Cubby's Map, the young mermaids told him that only the magical ink of the Golden Squid was capable of doing so. To reach the Squid, the young mermaids summoned Flo the Dolphin to escort Jake through the depths of the Never Sea.

Sandy reappears in the episode "Jake's Royal Rescue" rehearsing a song with Snappy the Hermit Crab and Stormy in Queen Coralie honor held at Hidden Cove. After Queen Coralie is rescued by Jake and his crew from Captain Hook and return to Hidden Cove, Sandy can be spotted successfully singing with Snappy, Marina, Stormy and the mermaids.

Sandy reappears in the episode "Play It Again, Cubby!", unknown to Jake and his crew at the time the song Cubby got stuck in his head was sung by Sandy calling for help he was caught in the current of Whirlpool Lagoon. Jake and his crew soon come to Sandy aid. Sandy is later seen singing with Jake and his crew in Tiki Forest.

Sandy makes a brief cameo in the episode "The Mermaid Queen's Voice", Sandy can be spotted sitting atop of the Purple Octopus head in the audience enjoying the duet between Captain Hook and Queen Coralie.

Sandy reappears in the episode special "The Great Never Sea Conquest". Sandy is sent by Queen Coralie to find Jake and his crew to help deal with the evil Mer-wizard named Lord Fathom is released from an underwater prison, he sets out to take over the Never Sea by awakening the legendary giant, three-headed serpent, the Strake. Sandy reaches Pirate Island and informs Jake and his mateys of the upcoming danger of Lord Fathom who has taken over Neptune City and imprisoned Queen Coralie, Marina, and Stormy. Jake assured Sandy that he and his friends will deal with the Mer-wizard and sent Sandy back to tell Queen Coralie. Sandy reappears at the end of the special once Jake re-imprisons the Strake and destroys the DarkLight Emerald, freeing Queen Coralie, Marina, Stormy, and the sea creatures. Sandy reveals himself from under a large seashell praising Jake as his hero.

Sandy appears in the episode "Where's Sandy", Skully ask the viewers to help locate Sandy who is hiding amongst the coral reef.

Sandy is featured in a few books in the series most noticeably the storybook adaptation of its a Winter Never again used as the star on Jake and his crew Winter Treasure Day tree.

Sandy is featured in the storybook adaption of Jake Saves Bucky. He sings clues leading to the next stop in the race between Bucky and the Jolly Roger.

Sandy reappears in the storybook adaptation of the episode special The Great Never Sea Conquest. He is sent to retrieve Jake and his crew help to rescue Stormy, Marina and Queen Coralie from Lord Fathom.

Sandy appears in the "Jake's Never Land Pirate School App". He can be spotted during the Map & Spyglass segment. The players learn to navigate Never Land with Cubby and then use the spyglass to find exciting treasures with Jake. 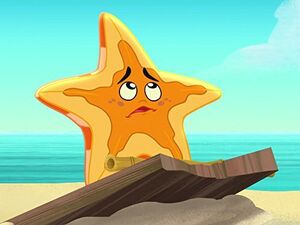 For more pictures and screenshots of Sandy the Starfish, click here.

Retrieved from "https://jakeandtheneverlandpirates.fandom.com/wiki/Sandy_the_Starfish?oldid=89894"
Community content is available under CC-BY-SA unless otherwise noted.