Sail Wagons (also spelled Sailwagons or Sail-Wagons) are fictional vehicles featured in the Disney Junior animated series, Jake and the Never Land Pirates. They are created from shipwrecks allowing pirates to sail across the land as they would the seas.

In the episode "The Great Pirate Pyramid", Captain Flynn finds a broken map piece in his ship's quarters. Cubby quickly understands the map and tells the crew that it leads to The Great Pirate Pyramid. With the Barracuda repaired, they set sail. When Jake and his crew reach the end of the Mysterious River, Flynn revealed the Barracuda can sail on land.Captain Hook and Mr. Smee construct there own Sail wagon to give chase.

In the episode "Race-Around Rock!", Jake, Izzy and Cubby have all made Sail Wagons for a big race to Race-Around Rock. Captain Hook becomes interested in the race, and so he and Smee make their own hook wagon from an old shipwreck.

In the episode "Captain Flynn's New Matey", Hook's Sail Wagon reappears as he purses Jake and Captain Flynn to the Golden Goblet.

In the episode "Smee-erella!",After hearing Mr. Smee's wish Pip the Pirate Genie soon appears,transforming Smee into the dashing, swashbuckling "Buck Buccaneer",and created a golden carriage like Sail Wagon allowing Mr. Smee attend the Pirate Convention and befriends his idol First-Mate Mollie who's been assisting Red Jessica with the festivities while.

In the episode "Captain Hook's New Hobby",Jake was the last to attempt to teach Hook a hobby back on Shipwreck Beach,suggesting Sail Wagon construction showing the one he built all by himself.Captain Hook did admit that the building a Sail Wagon did look like fun but commented that Jake's wagon was to puny.Hook was certain he could build one much more grand fitting a pirate captain of his stature.Using the various shipwreck on the beach and the part Jake provided Hook constructed a massive sail wagon. Jake tried to inform Hook that he may have went overboard created the huge sail wagon but Hook beg to differ believing it truly symbolized him as he climbed adored his creation. Soon the wind catches Hook's wagon sails but the captain couldn't control it as he race across Shipwreck Beach.Jake and his crew give chase with the assistants of Izzy's pixie dust but it was to late by the time the young pirate catch up to Hook 's sail wagon was destroyed into a pile of rubble.

In the episode "Happy 1000th Birthday!",While looking for treasure within the sands Never Land Desert in his new Sand buggy Sail Wagon Captain Hook attracts the attention of a hungry Sand Shark who later gives chase.Meanwhile Jake and the crew are celebrating the Pirate Mummy's 1000th birthday by giving him a a new sand ship like Sail Wagon of his very own. After Jake and his mates scare away the Sand Shark,Captain Hook latter hijacks the Pirate Mummy's special birthday surprise,The Pirate Mummy must use Jake and his crews other birthday gift to reclaim it.

In the first episode "The Golden Pyramid", Captain Hook and Mr. Smee over hear Jake and his crew on the search for the golden pyramid. Hook order Mr. Smee to build him a sail wagon so he can reach the pyramid first.

The Sail Wagons reappear in the episode "The Never Land Jungle Speedway",Jake challenges Captain Hook to a sail wagon race across Never Land.The winner who crosses the finish line first will win the Pirate Piece of the golden trophy in Big Tree Forest. 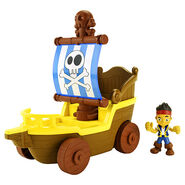 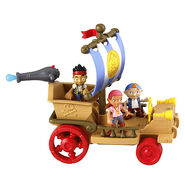 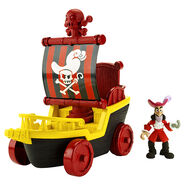 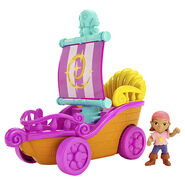