"Hook and the Itty-Bitty Kitty"

Playing, being with Red Jessica

Rosie is a recurring character from the Disney Junior series Jake and the Never Land Pirates. She is an adorable white kitten belonging to the pirate gal Red Jessica. Her vocal effects are provided by the late Russi Taylor.

Rosie first appeared in "Hook and the Itty-Bitty Kitty." In this episode, Red Jessica called for Captain Hook's presence, much to the love-struck captain's delight. He was quickly disappointed, however, when he learned the meeting wasn't romantically centered, but instead a request to cat-sit! Red Jessica had to set sail and run some errands on the sea, but Rosie is terrified of water. Red Jessica convinces Hook to watch over her kitten while she's away. But no sooner than Red Jessica departure, Captain Hook loses Rosie in the jungle. So with the help of both his and Jake's crew, they all searched for and tried to find Rosie before Red Jessica got back. When Red Jessica returned, she was delighted to see that Hook has taken a liking to her kitten, and decided to introduce him to her other "kitty," her tiger Sasha.

Rosie returns in the episode "Smee-erella!", Rosie played the damsel in distress during the first event in Red Jessica's Pirate Convention festivities. Sharky and Bones were the first contested to try to rescue the adorable kitten but the two musical pirates failed, much to the amusement of Rosie. Next, it was Mr. Smee under the disguise as the swashbuckling "Buck Buccaneer" turn to rescue the kitten, but jealous Captain Hook armed with his grappling hook was determined to make Buck a fool in front of Red Jessica. Jake and his crew alert Smee of Hook's plot and Smee successfully rescues Rosie, winning the first event at the pirate convention. 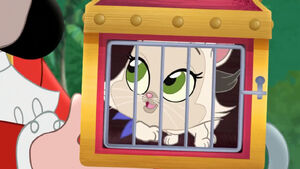 For more pictures and screenshots of Rosie, click here.

Retrieved from "https://jakeandtheneverlandpirates.fandom.com/wiki/Rosie?oldid=86835"
Community content is available under CC-BY-SA unless otherwise noted.