LaDuca is also executive producer of Disney's #1 series for preschoolers, "Mickey Mouse Clubhouse." Previously, he was director for the first season of the series. LaDuca also directed a number of episodes of "Lilo & Stitch: The Series" for Walt Disney Television Animation. He was a sequence director on "The Ant Bully," produced by Tom Hanks for Warner Brothers Pictures, and on the 2002 Academy Award nominated CGI feature "Jimmy Neutron, Boy Genius."

LaDuca's additional directing credits include the Emmy Award-winning "Tutenstein" for Discovery Channel and NBC, and Dreamworks Feature Animation's "Joseph, King of Dreams," which won him a DVD Premiere Award for Best Directing and the Heartland Film Festival Award for Best Film.

A 20 year veteran of Walt Disney Television Animation, LaDuca additional credits include "The Lion King II: Simba's Pride," "Boo! To You Too, Winnie the Pooh," "Disney's Aladdin" and "The Lion Kings: Timon and Pumbaa." His storyboarding credits include "Gummi Bears," "The New Adventures of Winnie the Pooh," "Duck Tales," "Chip n' Dale Rescue Rangers" and "Tale Spin." LaDuca's storyboarding has twice received special recognition from The Academy of Television Arts and Sciences, awarding him Emmy Award certificates for "Winnie the Pooh" and Marvel Productions' "Muppet Babies."

LaDuca previously worked for the innovative Ralph Bakshi and later at LucasFilms' Industrial Light and Magic, animating the special effects on "Poltergeist," "Return of the Jedi" and "Star Trek II: The Wrath of Khan." His career has also taken him overseas to Japan, Korea and England to supervise animated projects for Disney and other animation studios. 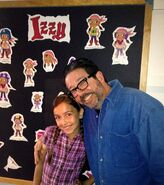 Add a photo to this gallery
Retrieved from "https://jakeandtheneverlandpirates.fandom.com/wiki/Rob_LaDuca?oldid=88245"
Community content is available under CC-BY-SA unless otherwise noted.