"Hook and the Itty-Bitty Kitty"

Captain of the Rose
Pirate

"Ahoy, James! You made excellent time."
"Fabulous! I knew I could count on you, James!"
"Ta-ta, Rosie-wosie! Mommy shall return!"
"Mommy missed you too, yes she did!"
"Thank you, James, for taking such good care of Rosie! I never knew you were so fond of cats."
"Oh, well then maybe you'd like to meet my other kitty. Other kitty?"
"Now what's gotten into him?"
Red Jessica is a recurring character from the Disney Junior series Jake and the Never Land Pirates. She is a very beautiful swashbuckling pirate lady living on her own private island in the Never Sea known as Crimson Isle. She is voiced by Jane Kaczmarek.

As briefly mentioned in the episode "The Lighthouse Diamond", Red Jessica has resided in Never Land even as a child as she enjoyed visiting Pirate Island to see the midnight sunflowers bloom. Years later Red Jessica has grown to be a swashbuckling pirate adventure and treasure tracker who has yet to find a treasure she couldn't handle. One day while sailing out at sea Red Jessica spots a pirate named Captain Hook, stranded in the middle of the Never Sea being chased by a crocodile. After rescuing Hook from the crocodile unbeknownst to Red Jessica at the time, Captain Hook develops a massive crush on her.

Red Jessica is depicted as a kind-hearted, sweet, adventurous, good-natured, strong-willed, polite, cunning, fierce, and determined explorer. She has been shown to be incredibly intelligent, using her wits to solve puzzles. However, it is revealed in the episode "Hooked!" that she can be somewhat stubborn when it comes to treasure and usually relies on her own skills to claim the treasure.

Red Jessica carries a slender build. She has fair skin, freckles, pink lips, curly red hair, and hazel eyes. She wears a maroon pirate captain's hat with a rose symbol and a pink feather, a red bandanna underneath, large gold loop earrings, a cream long-sleeved shirt over a red vest with gold hems and a maroon belt, dark orange pants, and maroon boots with gold buckles.

As a pirate, Red Jessica possess skills fencing, athletics, martial arts and other skills in combat; which she had learned for being a treasure tracker. She is also shown to be very clever.

Red Jessica first appeared in "Hook and the Itty-Bitty Kitty " . In this episode, she called for Captain Hook's presence, much to the love-struck captain's delight. However, although Hook thought it would be romance centered, it was actually for Hook to watch over her kitten Rosie. Red Jessica was about to sail the seas and her kitten is afraid of water, so Hook offered to cat-sit. When she returned, she was delighted to see that Hook has taken a liking to her kitten and decided to introduce him to her other "kitty", her tiger Sasha.

Red Jessica reappeared in the episode "A Bad Case of the Barnacles!" where she informs Jake and his crew where to find the Zebra Rose which would cure Bucky's barnacles, Captain Hook also tries to impress her by beating the sea pups to the flower and presenting it to her.

In the episode "Hooked" Red Jessica joins Captain Hook on a treasure hunt for the Ruby Heart of Hearts.

In the episode "Hook's Playful Plant!"while Captain Hook and his crew prepare the Jolly Roger for Red Jessica visit. Hook accidentally goes overboard with the cologne Red Jessica gave him when he notices the wilted plant also enjoys the cologne has sprung back to life and is growing out of control.

In the episode "Sandy and the Clams" Captain Hook's has a date with Red Jessica on Never Land. Jake and his crew try to rescue Sandy's singing clams friends who have been accidentally used as a decorative piece back, but Hook tries to stop them, thinking they want the pearl necklace he wants to give to Red Jessica.

In the episode "Mystery of the Missing Treasure!" Jake and his crew discover that someone has stolen their Team Treasure Chest. While searching for the suspect on Pirate Island Jake and his crew discover a perfume bottle and a feather Izzy determined the culprit was a female pirate so the young pirate sail to Crimson Isle ask Red Jessica if she knew who took the Treasure Chest. Red Jessica identified the fragrance as French Forever flowers but couldn't recall the feather but knew it looks familiar.

In the episode "Smee-erella!", Red Jessica's held her Pirate Convention on Crimson Isle with the assist of her new friend and future first mate Mollie assisting Red Jessica with the festivities. Captain Hook, Sharky and Bones were the first to arrive at the con Hook was thrilled to be in the company of his beloved Red Jessica who introduce Hook to Mollie, who already knew of the captain nefarious reputation. Smee soon arrives after being transformed into the dashing, swashbuckling "Buck Buccaneer" by Pip the Pirate Genie. Mr. Smee finally gets the chance to meet Mollie who wasn't the only one fascinated by Buck Buccaneer Red Jessica was also fascinated with the new pirate much to the jealousy of Captain Hook.

Red Jessica reappeared at the end of the episode "A Royal Misunderstanding ", Red Jessica discovers Hook and his crew sulking about still in costume after their fail attempt to rid King Crab and Queen Coralie from the beach. To make matter worse for Hook, Red Jessica planed form being to watch both the crabs race and the mermaids ballet with James.

Red Jessica reappears in the episode "Captain Scrooge", it was revealed during Captain Scrooge (played by Captain Hook) visit by ghostly Captain Treasure Tooth journey into the past. Hook, Smee, Red Jessica, and Flynn had adventures together as children on Never Land. Red Jessica discovers a map in a bottle leading to treasure but greedy Hook swipes the map from his young friend fleeing into the Never Land Jungle where he comes across a stone tiki, using the statue as the perfect place to hide the map. But as time set Hook soon forgets about the treasure but during his travels with Treasure Tooth Hook decides to claim the treasure once more. It wasn't until he learns the true spirited of the holiday is to be with others rather than things. Red Jessica reappears during the great pirate feast surprise to Hook. Captain Scrooge returns the map he took from her many years ago and apologizes for his actions. Red Jessica was grateful for the action of the reform captain kissing him on the cheek. Later the duo is seen dancing together.

Red Jessica reappears in the episode "Tiki Maskerade Mystery", Jake and Captain Hook's teamed up to catch a thief when the Golden Tiki was stolen during the Tiki Maskerade. While all the other guests appeared to be innocent it looked like Red Jessica was the thief. Hook refused to believe that his beloved would do anything sneaky. It turns out Beatrice Le Beak was the thief and almost made her escape with the treasure if it wasn't for the real Red Jessica disguised as a Tiki Tree.

While Red Jessica doesn't make a physical appearance she is briefly mentioned in the episode "The Legion of Pirate Villains!" by Captain Hook as he struggles to decide to help Jake and his crew stop the Grim Buccaneer from uncovering Captain Colossus's treasure of ultimate power.

In the episode "Dancing with Pirates ", Jake explains to the viewers that even dancing can be a useful pirate skill. Red Jessica is seen dancing with Captain Hook during the pirate waltz. 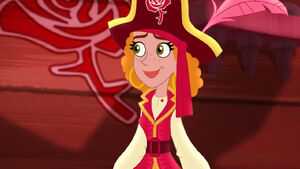 For more pictures and screenshots of Red Jessica, click here.

Retrieved from "https://jakeandtheneverlandpirates.fandom.com/wiki/Red_Jessica?oldid=91813"
Community content is available under CC-BY-SA unless otherwise noted.