Swimming, singing, gifts,jewels of The Never Sea,being the center attention

Captain Hook, her kingdom in danger,not getting her way

Swimming, ability to communicate with the Never Sea creatures

"Away, friends of the Never Sea."
"Make way for me... Queen Coralie."
"Scales and tails, who dares delay Her Royal Highness?"
"I could never forgive myself if my mermaids didn't get a chance to bask in my radiance."
"How dare you speak that way to Queen Coralie, ruler of the mermaids and empress of the Never Sea."
"I am a legend.A living, swimming, singing one."
"And now my little two-leggers, you may help me off this dingy dinghy.I'm late for an appointment."

Queen Coralie is a supporting character in Disney Junior animated TV series Jake and the Never Land Pirates. She is the queen of the mermaids of Never Land and ruler of Neptune City. She is voiced by Leigh-Allyn Baker.

As revealed in the episode "The Mermaid Queen's Voice". During her youth Queen Coralie attended the Never Land Academy of Pirates and Mermaids, Coralie was the favorite pupil of Mama Hook, later there interaction over the year blossomed into a friendship as they got older. Years later Coralie would later grow to become the queen of her people, beloved by all the mermaids and the creatures of Never Sea. As revealed by Sharky when he and Bones accidentally catches Coralie in a fishing net in "Jake's Royal Rescue". Various pirates believed the mermaid queen was merely a creature of legends and fairy-tales.In the special "The Great Never Sea Conquest" it was revealed that after defeating Lord Fathom, King Neptune gave Queen Coralie the task of keeping the DarkLight Emerald safe by locking it away in Neptune City for many years.

In terms of personality, she can be somewhat snobbish, self-centered, and has a tendency to act aloof to those she finds beneath her particular Captain Hook who she can never remember or pronounce his name correctly during their first meeting. She simply adores being the center of attention by others and getting everything she wants. Queen Coralie also thinks highly of the sea and adore her kingdom and its many wonders and doesn't think too highly of the surface with the exception of her two-legged friends Mama Hook, Jake, and his crew.

Queen Coralie was briefly mentioned in the episode "Treasure of the Tides" Izzy joins Marina, Stormy, and the mermaids on a quest to find the Mermaid Queen's Throne hidden beneath the waves of Hidden Cove.

Queen Coralie reappears in the episode "Trading Treasures", the queen comes to Pirate Island needing Jake and his crew assistants retrieving the Golden Glam-Shell from the Octopus while she finishes her preparations for her Fin and Frolic dance party. Queen Coralie reappears at the end of the episode back at Mermaid Lagoon when Jake and his crew return the Glam-Shell to her to light up the lagoon for the Fin and Frolic dance party.

Queen Coralie returns in the episode "The Mermaid Queen's Voice". Queen Coralie was set to host and perform a concert at Mermaid Lagoon but comes down with laryngitis right before the concert begins. Jake and his crew knew the magical waters of Fa-La-La Falls would restore the queen's voice. Unaware to the young pirates, Captain Hook desired to host his own concert for the inhabitants of Never Land and refuses to be upstaged by the mermaid queen. Jake and his crew finally return to Mermaid Lagoon with the Fa-La-La water but as Jake was about to hand the bottle to Queen Coralie, Captain Hook swoops in and manages to steal the bottle. This is short-lived as Hook is quickly scolded by his mother who arrives at the lagoon as Queen Coralie's guest.

Mama Hook reveals that Queen Coralie is one of her dearest old friends. Ever since their days at the Never Land Academy of Pirates and Mermaids, Coralie was Mama Hook's favorite pupil. Mama Hook donated a giant seashell for Queen Coralie to uses as a stage for her concert. It was also revealed that Coralie only wanted to perform her concert in the first place in Mama Hook's honor for her generous gift. Not one to go against his mother's wishes, Captain Hook reluctantly return the bottle to Queen Coralie, restoring her voice. Cubby overhears Captain Hook sulking that he only wanted to perform his own concert, and suggests that Hook and Queen Coralie both sing at the concert.

Queen Coralie makes a brief appearance in the episode "Izzy and the Sea-Unicorn", Izzy's new friend Cornica, a magical sea-unicorn, disappears and Jake suggests they ask the mermaids if they knew where to find her. Queen Coralie and a few of her subject didn't believe Izzy's tale and had other matters to attend to help.

Queen Coralie returns in the episode "A Royal Misunderstanding", Queen Coralie was set to perform a water ballet with her subject at the beach. However once Queen Coralie arrive she soon discovers she isn't the only one interest in the beach King Crab and his crabs also desire the location for their race. Jake suggests both King Crab and Coralie share the location. However, King Crab and Coralie aren't the only ones interested in the beach-Captain Hook also desires the beach for his date with Red Jessica. Hook orders Sharky and Bones to interrupt Marina and the other mermaid's ballet practice disguised as crabs in order to wreak havoc between the mermaids and the crabs. Marina and the mermaids went off to tell the queen, King Crab and Queen Coralie accused each other of sending their subjects of wrecking the race track. Later the two royals found out that it was Hook and his crew behind all this. King Crab and Coralie put aside their differences and decided to give Hook and his crew a taste of there own medicine as payback.

Queen Coralie reappears in the episode "Sleeping Mermaid", She joins Jake and his crew accompanied by Marina as they collect seashells on the beach, the queen notice a stone message on rock wall warning the dangers of the Spell Shell which has the power to put anyone into a deep sleep. Marina soon finds the Spell Shell, but as she hands the shell to the queen it puts Coralie into a deep sleep. The only way to reverse the spell is if Jake and his crew must convince Captain Hook to help. Hook reluctantly agrees to assist the mermaid queen in order to claim the huge pearl Marina offers for his reward. It wasn't until Hook learned the final phase to break the spell that he had to kiss the queen, which he refused believing no treasure is worth such humiliation as he tries to flee, Jake and his crew manage to stop him by tugging at the captain's coat causing him to tumble backwards and accidentally kiss the sleeping mermaid. Once awake, Queen Coralie learned Hook released her from the sleeping spell through his kiss, to which both agree never to speak of this day again.

Queen Coralie reappears in the episode "Captain Jake and the Never Land Pirates: The Great Never Sea Conquest". When the evil Mer-wizard named Lord Fathom is released from an underwater prison, he sets out to take over the Never Sea. Lord Fathom tricks the mermaid queen into revealing the location of the DarkLight Emerald the source of Lord Fathom's power and imprisoned her Marina and Stormy before starting his take over of the Never Sea. Using the powers of his sword, Jake finally defeats Fathom and the Strake. He then re-imprisons the Strake and destroys the DarkLight Emerald, freeing Queen Coralie, Marina, Stormy, and the sea creatures.

Queen Coralie was briefly mentioned in the episode "Attack Of The Pirate Piranhas" by Finn the Mer-Boy as he plans to visit her at Mermaid Lagoon.

While not having anything to do with the plot of the episode Queen Coralie makes a brief cameo appearance in "The Legion of Pirate Villains!" During the post-credits Queen Coralie, Stormy and Marina are seen waving at Jake and his friends as the Mighty Colossus sail past them.

Queen Coralie reappears in the episode "Tales of Captain Buzzard". She is portrayed as the Lady of the Lake in Captain Buzzard's story of the Knights of the Round Tower. As Jake, Izzy and Captain Hook journey across her lake to the Golden Goblet she shows her self. While Jake greets Coralie with kindness, Hook insults her fueling her with much anger that she takes it out on all of the pirate knights creating a massive typhoon before returning back to the depths of her lake. After Jake successfully makes it through the typhoon to shore, Queen Coralie returns to praise and wish him safe passage to find the Golden Goblet as she returns once more to the depths of her lake for her bath.

Queen Coralie has made a few minor appearance in a various book in the series. Queen Coralie, Marina, and Stormy make a brief appearance in the storybook adaption of Battle for the Book. When Peter Pan comes to the mermaid's assistance dealing with a large sea monster that has entered their lagoon.

Queen Coralie reappears in the storybook adaption of the episode special The Great Never Sea Conquest. 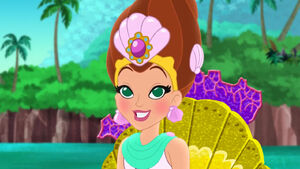 For more pictures and screenshots of Queen Coralie, click here.

Retrieved from "https://jakeandtheneverlandpirates.fandom.com/wiki/Queen_Coralie?oldid=90955"
Community content is available under CC-BY-SA unless otherwise noted.