Jake and the Never Land Pirates Wiki
Register
Don't have an account?
Sign In
Advertisement
in: Locations, Islands

Pirate Princess Island is an island featured in the Disney Junior animated series, Jake and the Never Land Pirates. It is where the Pirate Princess lives, along with her pet sea serpent, Cecilia.

Pirate Princess Island reappears in the episode "Misty's Magical Mix-Up!", when Misty the Wonderful Witch accidentally triggers the Shadow Wand, reverting Misty back into the evil Sea Witch, who plans to turn the Pirate Princess into a gold statue, once again. The Sea Witch confronts the Pirate Princess at her palace, proving far more powerful then their last encounter against the princess and might have succeeded if Jake and his crew had not intervened with Bucky's bubble cannon. Later The witch prepares to blast the princess and young pirate team with her Shadow Wand, but Izzy quickly uses her pixie dust on the witch, causing her to drop and destroy the Shadow Wand, leaving the witch powerless. The Sea Witch confesses the reason she wanted to turn the princess to gold is that she refused to be her friend when they were younger, claiming the cruel pranks she played on the princess were only jokes to make her laugh. The Pirate Princess forgives the Witch for her actions, and, reassuring her they are friends, turns the witch back into Misty the Wonderful Witch.

Pirate Princess Island reappears in the episode "Trading Treasures", where Jake and his crew need a diamond from the Pirate Princess to trade the Octopus for the Golden Glam-Shell for Queen Coralie's Fin and Frolic dance party. 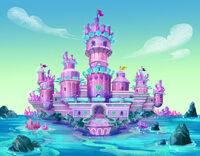