Jake and the Never Land Pirates Wiki
Register
Don't have an account?
Sign In
Advertisement
in: Females, Princesses, Pirates,
and 13 more

Princess of the Pirates

Pirate Princess Island off the shores of Never Land

Captain Hook, being turned to gold by the Sea Witch, losing her Rainbow Wand

Magic from her Rainbow Wand

"I'm free! I'm finally free!"
"Who saved me from the sea witch's evil spell?"
"Izzy, you have proven that you are a true pirate princess: smart, strong and brave. Just like me."
"By the colors of the rainbow! I finally shake off an evil spell just in time to deal with Captain Hook?"
"May all your sailing days be as golden as mine."
"Stormy seas, I can't find my rainbow wand anywhere. Where could it be?"
"Hearts and flowers!"
"Radiant rainbows!"
The Pirate Princess is a recurring character from the Disney Junior animated series, Jake and the Never Land Pirates. She is voiced by Tori Spelling, while her singing voice is provided by Laura Dickinson.

The legend of the Pirate Princess is a famous story among pirates and the various inhabitants of Never Land. Long ago, she sailed the Never Sea with pride, but during one of her voyages, an evil sea witch cast a spell on the princess, turning her into 24 karat gold and causing her ship to crash inside of a hidden grotto. The Pirate Princess was never seen again since, until Izzy learned about the legend years later.

Much of the Pirate Princess' past was left unknown, until the season three episode "Misty's Magical Mix-Up!", where it is revealed that the princess and the Sea Witch knew each other growing up in a faraway kingdom. It was also revealed during that time the princess was the victim of the witch's magical pranks, but the princess believed that the witch was being cruel, resulting in the witch spending most of her childhood hated by the princess.

The Pirate Princess is a beautiful young girl with a slender figure. She has wavy, auburn hair, hazel eyes, olive skin, rosy cheeks, and naturally red lips. She wears a purple pirate hat on her head with a lavender trim and a golden crown design on the center, a light pink off-the-shoulder puff sleeve blouse underneath a purple corset with golden laces, a long, purple sarong-like skirt with a lavender trim, a black belt with a golden buckle, white gloves with golden buttons, dark violet pants, and crimson bucket top boots with low heels and golden trims.

The Pirate Princess possesses magical powers from her mysterious wand. The wand creates rainbows with just a swing, but could possibly be more powerful, as she was relieved to get it back before it got into the wrong hands in the episode "The Rainbow Wand". The wand could have been responsible for the creation of her castle, as well. She is a skillful sailor and describes herself as brave, strong, and smart.

The Pirate Princess makes her first appearance in the episode of the same name, where Izzy informs Jake, Cubby and Skully of the legend and the three decide to free her from the witch's curse. Captain Hook and Mr. Smee also hear about the legend and decide to steal the princess's ship which is made of 24 karat gold as well. Jake and his crew travel through the Crystal Tunnel and meadows and finally reach her. Izzy uses her pixie dust to free the princess and all is restored, but Captain Hook is still determined to steal the ship. Luckily, Skully made shadows resembling the sea witch, thus scaring off Captain Hook and his crew. She thanks the pirates and deems Izzy a true princess.

Later in the episode "The Rainbow Wand", the princess had lost her magical wand, which, oblivious to her, was recently found by Izzy back at Pirate Island. They journey off to the Pirate Princess's castle to return it, but are followed by Captain Hook and his crew. After reaching the castle, they use the help of the princess's pet sea serpent, Cecilia, to get rid of the captain. The Pirate Princess uses the magic of her wand to create a rainbow which leads Jake and his crew home.

The Pirate Princess returns in the episode "The Never Rainbow". In this episode, the Princess's rainbow wand has run out of power. Luckily for her, the legendary Never Rainbow has appeared over Pirate Island, Never Land and the Never Sea. The rainbow leads to the Dazzle Diamond which if taped by the wand, the said wand will be empowered. However, as the crew set off, Captain Hook learns from his crew that every rainbow leads to the treasure, urging the captain to go after it. Once both teams of pirates meet and the diamond, the Pirate Princess manages to recharge her wand but Hook still attempts to steal the treasure. Unfortunately for the villain, the Never Rainbow vanishes along with the diamond leaving the captain treasure-less. Back on Pirate Island, the Pirate Princess lets her friends Izzy and Jake try out the fully charged wand. In the process, Jake accidentally zaps Hook with the rainbow rays comically turning Hook into an all colorful version of his former self, just as he just desired to never see a rainbow again.

In "The Queen of Never Land", the Pirate Princess and Winger were summoned by the Queen of Never Land, who was actually Captain Hook in disguise. The princesses were told to present a gift and the "Queen" will decide who shall be the heir to the throne. However, Jake and the crew exposed Hook's plans, but the captain stole the Pirate Princess's diamonds anyway. While trying to escape the heroes, Hook and his crew sails through a murky swamp causing the Jolly Roger's sails to be ensnared within the swamp's vines, ripping the sails of Hook's ship in the process and causing the Jolly Roger to steer out of control until it crashes into nearby rock causing Captain Hook to fall overboard and at the mercy of Tick-Tock the Crocodile who attempts to devour him. The Pirate Princess, Winger, and Izzy soon come to Hook aid using Izzy's pixie dust, allowing the Pirate Princess to reclaim her diamonds in the process.

The Pirate Princess took part in Jake's birthday celebration with the rest of the pirate team's Never Land friends in "Jake's Birthday Bash!".

The Princess reappears in the episode "Misty's Magical Mix-Up!". The Sea Witch has returned once more bent on transforming the princess into gold. The Sea Witch confronts the Pirate Princess at her palace, proving far more powerful then their last encounter and might have succeeded if Jake and his crew had not intervened with Bucky's bubble cannon. With the witch temporally foiled, the Pirate Princess revealed to Jake and his crew that she and the witch grew up together in a faraway kingdom, and that the witch always pulled tricks on her. Meanwhile, the Sea Witch allies herself with Captain Hook and Mr. Smee to distract Jake and his crew while she took care of the princess. After the climactic battle, the Sea Witch, now powerless due to the destruction of her Shadow Wand, confesses the reason she wanted to turn the princess to gold is that she refused to be her friend when they were younger, claiming the cruel pranks she played on the princess were only to make her laugh. The Pirate Princess forgives the Witch for her actions and befriends her, once again transforming her back into Misty the Wonderful Witch.

The Pirate Princess makes a nonspeaking cameo in the episode "Smee-erella!", attending Red Jessica's pirate convention on Crimson Isle. She could be seen conversing with Pip the Pirate Genie. Later, the duo is seen dancing during the Pirate Waltz. The Pirate Princess is last seen sailing her ship in the Pirate Ship Parade.

In the episode "Princess Power!", the Pirate Princess, again, accompanied by Princess Winger, names Izzy an honorary princess, while aiding the young pirates' search for the Princess Treasure that was hidden deep within Never Land.

The Pirate Princess makes a nonspeaking cameo in the episode "Captain Scrooge", where she can be seen taking part in the Great Pirate Feast.

The Pirate Princess makes a nonspeaking cameo in the episode "Tales of Captain Buzzard" as a beggar being recused by the swashbuckling heroes, the Three Buccaneers, portrayed by Jake and his crew in Grandpa Bones's story.

The Pirate Princess makes a brief cameo in the episode "I've Got my Sword". As Jake mentions how various pirates have objects dear to them, for the princess, it is her Rainbow Wand.

The Pirate Princess makes a brief cameo appearance in the storybook adaptation of Birthday Bash. She can be seen wishing Jake a happy birthday with the rest of his Never Land friends, welcoming him back on Pirate Island.

The Pirate Princess’s only video game appearance is in the Disney Junior online game "Rainbow Wand Color Quest”. She is the main focus of the game, revealing that her old foe, the Sea Witch, has drained all the color of Never Land. She teaches the player how to wield her Rainbow Wand, which has the power to restore the colors of the island once more. 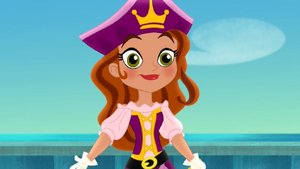 For more pictures and screenshots of Pirate Princess, click here.