"Rise of the Pirate Pharaoh"

Restoring his kingdom to its former glory

Happy To have the Never Nile back to former glory.
Set off to rebuild his kingdom
The Pirate Pharaoh is a character from the Disney Junior series Jake and the Never Land Pirates. He is a legendary pirate pharaoh who was sealed deep within the Never Land Desert long ago.He is voiced by Aasif Mandvi.

According to the legend revealed by the Pirate Mummy, the Pirate Pharaoh once ruled over Pharaoh Valley with cruelty, magic, and despised intruders into his kingdom. While the Pharaoh is arrogant and intimidating it is later revealed that he is actually a kind and prideful ruler of the Never Nile before being sealed away by the wicked Queen Patra Cleo before she locked all the waters of the Never Nile away in a mountain.

The Pirate Pharaoh is very arrogant, egotistical and vain boasting his power and lording his title as Pharaoh over everyone, thinking very little of the feelings of others at times. Even after reconciling with Jake and his crew during his debut he still thinks somewhat little of them despite the numerous times the young pirates have to help him. He believes as pharaoh all who reside within the Never Land Desert most follow his command without question. When refused he can be short-tempered and even threatening using force to those who refuse him as seen in the episode "Mummy First Mate" when the Pirate Mummy decline the Pharaoh's offer to be his first-mate and joining him on his treasure hunt.

The Pirate Pharaoh reappears in the episode "Dread the Pharaoh!", Otaa's amuses his self while playing in the desert he stumbles upon Dread the Evil Genie 's bottle and releases him. Otaa was thrilled to have all the wishes he ever wanted and wish to help his master. Dread inform Otaa he lost his power and can't help. Otaa soon loses interest in the ex-genie Dread returning to Pharaoh's side. Later with the assistant of Skorpio the Scorpion, Dread manages to steal both the Pirate Pharaoh's magical crook and flail before casting Otaa and his Pharaoh out of the desert. The Pirate Pharaoh was furious at the loss of his power and kingdom and didn't know what to do, Otaa suggests getting Jake and his crew help to deal with Dread. The Pirate Pharaoh is last seen thanking Jake and his crew and casting Dread and Skorpio out of his kingdom.

The Pirate Pharaoh in the reappears in the episode "Mummy First Mate". The Pharaoh barges into the Pirate Mummy's tomb for the Mummy demanding he become his first mate, much to the dismay of the Pirate Mummy who reveals he finds the Pharaoh a tad intimating. But the Pharaoh refuses to let the Mummy get away from helping him find a magical elixir that can make his pyramid grow hidden within the desert. Jake and his crew tag along to keep the peace between both the Mummy and Pharaoh. 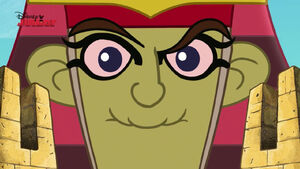 For more pictures and screenshots of Pirate Pharaoh, click here.

Retrieved from "https://jakeandtheneverlandpirates.fandom.com/wiki/Pirate_Pharaoh?oldid=89840"
Community content is available under CC-BY-SA unless otherwise noted.