"Treasure of the Pirate Mummy's Tomb"

Captain of the Silver Sand Sweeper

Becomes friends with Jake, his crews and Captain Flynn

"P-p-people."
"I be the one who needs hiding! Now, where did I stow that secret reverse lever? ","
"Afraid? Well, I don't get a lot of visitors so, p-p-people give me the heebie-jeebies."
"Well, you could have fooled me! Why, all that screaming and yelling and setting off me pirate booby traps... ...jitters a pirate mummy's nerves, it does!"
"Very clever of ye! The ankh's a real sand-mover!"
Well, dust me sarcophagus!
By the eye of Horace, that's a spitting image of Hook!

Not much is known about the Pirate Mummy life before or how he died other than he is a captain, what is known he is a cowardly character due to residing within his tomb deep with the in the Never Land Desert he rarely has any visitor and is a bundle of nerves when he meets people or hears loud noises. But later through the course of the series, the Pirate Mummy has started to come out of his shell thanks to Jake and his crew.

Mostly due to lack of interactions with others and flimsiness, the Pirate Mummy is an incredibly timid, fragile, and insecure character. He apparently suffers from anxiety and is often seen cowering in fear during his debut. Though Jake and his crew don't seem to mind the Pirate Mummy's constant fears and happily brings him along and/or protects him through every adventure, the Pirate Mummy is noticeably embarrassed and ashamed of his dominate cowardliness, and though he's far from the bravest inhabitant of Never Land, he has successfully come through for his friends on numerous occasions. He's also rather creative and has a massively passionate side to him, valuing his friendships all else.

The Pirate Mummy first appeared in the episode "Treasure of the Pirate Mummy's Tomb". Jake and crew accompanied by Captain Flynn venture into the Pirate Mummy's Tomb in the search of the Never Land Ankh which has the power to free Flynn's ship The Barracuda from the sands of the Never Land Desert unknown that Captain Hook overhears the pirates and decides to claim the ankh for himself he comes up with a scheme disguising himself and Mr. Smee as mummies to scare Flynn and the others away. While Hook sets his sneaky plan into motion the Pirate Mummy overhears them entering the tomb. Later when the pirates enter the chamber of the ankh and Hook and Smee were revealed as the mummies that chase the hero into earlier. Captain Hook grows impatient with the ankh no were in sight he begins throwing various levers sealing everyone within the chamber and revealing the real Pirate Mummy much to the fright of the other pirates but much to their surprise the Mummy was more afraid of them and was no threat to the pirates Jake ask if they could barrow the ankh to assist Captain Flynn but Captain Hook demands the ankh for himself and tried pulling another lever believing it would grant him the treasure but instead forces sand to fill the chamber.. Thinking Jake ask for the ankh which the Pirate Mummy reveals and informs how to use the power of the ankh to rescue everyone forms the sand. But even after the ordeal greedy Captain Hook was still determined to have the golden ankh much to the annoyance of the Pirate Mummy who pulls another activating another pirate booby-trap sending Hook and Mr. Smee flying out of the Pirate Mummy's tomb.

The Pirate Mummy is last seen lending Jake and his crew the golden ankh's power to free Captain Flynn's ship and allows the young pirates to visit his tomb anytime they like.

The Pirate Mummy reappears in the episode "Jake's Awesome Surprise", he attends Jake's birthday celebration with the rest of the pirate teams Never Land friends.

The Pirate Mummy reappears in the episode "Happy 1000th Birthday!", Jake and the crew are celebrating the Pirate Mummy's 1000th birthday, but when Captain Hook hijacks his special birthday surprise, a new sand ship, the Pirate Mummy must use his birthday gift from Jake and his crew to reclaim it.

The Pirate Mummy reappears in the episode "Rise of the Pirate Pharaoh", he accompanied Jake and his crew through the various mysteries of the Never Land Deserts Pharaoh's Valley when they reveal a tomb and decide to explore. But using the magical crook and fail to bring the Pirate Pharaoh back to life. The Pirate Mummy knew of the powers of the pharaoh's wrath and assist Jake and his crew.

The Pirate Mummy reappears in the episode "Peter Pan's 100 Treasures!" He is one of the contestants alongside Captain Jake and the other Never Land captains competing in a scavenger hunt hosted by Peter Pan.

While not making a physical appearance in the online game "Super Pirate Powers", the Pirate Mummy is briefly mentioned by Jake when he uncovers the mummy's Never Land Ankh to aid him in his quest to reclaim the Mega-Mecha Sword from Captain Hook. 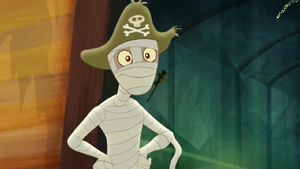 For more pictures and screenshots of Pirate Mummy, click here.

Retrieved from "https://jakeandtheneverlandpirates.fandom.com/wiki/Pirate_Mummy?oldid=92052"
Community content is available under CC-BY-SA unless otherwise noted.