Jake and the Never Land Pirates Wiki
Register
Don't have an account?
Sign In
Advertisement
in: Locations, Islands

Pirate Island is one of the central locations featured in the Disney Junior animated series, Jake and the Never Land Pirates. It is the home of pirates Jake, Izzy, Cubby and Skully. It is located just off the shores of Never Land. Though it appears to be an ordinary island from the outside, inside lies a very large pirate hideout that can be accessed by pushing on a lever in a tiki idol, which reveals a secret entrance.

Pirate Island was the main focus in the pilot episode "Hide the Hideout!". Jake and his pirate crew were having a fun day on Pirate Island until they spot the Jolly Roger approaching the island. Captain Hook plans to uncover the secrets of Pirate Island and make it his hideout. With the assistance of Mr. Smee, Captain Hook tried to find the means to gain access into the hideout unaware that Jake and his crew were defending their hideout.

In the episode "The Lighthouse Diamond", Red Jessica decides to visit the island, as she revealed in her message she once visited the isle when she was a little girl to witness the Midnight Sunflowers bloom. In order to assure safe passage to the island, Jake and his crew, accompanied by Cubby's firefly companion Brightly, venture to the far side of the island to the old abandoned lighthouse to light Red Jessica's way using the Lighthouse Diamond. Unknown to Jake and his friends, Captain Hook was spying on them and desired whatever treasure the old lighthouse held.

In the episode "Hideout…It's Hook!", when the hideout is in danger of self-destructing, Jake and his crew must evacuate the hideout for good and try to flush Captain Hook out when he makes his way into it. But by the end of the episode, it was Hook's bumbling that saves the island.

In the episode "The Remarkable Beardini!", the legendary magician, Beardini the Pirate Magician is set free by Captain Hook and Mr. Smee who tricks the magician into believing that Jake has stolen his invisibility ring and revealing the location of Pirate Island, forcing Beardini to leave his lair allowing Captain Hook the chance to raid it to find Beardini's treasure detecting wand. Beardini soon confronts Jake and his crew determined to get his ring back. However, Jake informs the magician he never intended to take the ring and was merely protecting from falling into Hook's grasp.

Pirate Island appears during the intro and closing sequence to the spin-off. The island also serves as the central location in a few episodes.

A few clips of Pirate Island can be spotted in the spin-off.

Pirate Island plays a larger role in the episode "Hideout Hijinks!". Jake and crew try to uncover the magical Pirate Piece hidden within their hideout.

Pirate Island is featured during the intro to the live musical stage show. Jake and his swashbuckling friends, Izzy and Cubby, along with a little help from Peter Pan, battle Captain Hook to unlock the treasure hidden inside a mysterious volcano. 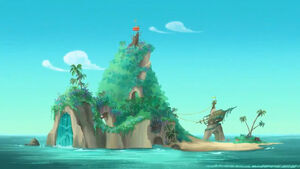 For more pictures and screenshots of Pirate Island, click here.