"The Legion of Pirate Villains!" (cameo)

Jake and his crew, his powers, his freedom, singing, telling stories of his travels

"Whoo-hoo! It sure is great to be free!"
"There's never enough room in that bottle! Ha-ha!"
"One hundred percent, through and through! From me head to me toes!"
"Aye, but not just any old wishes. I'm a pirate genie, and that means I make wishes for treasure come true!"
"Wish-tastic!"

Pip the Pirate Genie is a recurring character from Disney Junior's television series Jake and the Never Land Pirates. He is voiced by Jerry O'Connell.

Like for most popular depictions of genies, Pip was originally a slave. Though he possesses great powers, he is bound to his ship-in-a-bottle and has to use his powers when the owner of the bottle (his master) makes a wish; he occasionally does things without granting a wish, but never anything that greatly affects the world around him. For whatever crew keeps a hold of his bottle, each crew member gets one wish. Pip's bottle comes into the possession of Jake and his crew one day on Pirate Island, and he remains in servitude until Jake and his crew uses the combination of their wishes to grant Pip's his own real ship thus his freedom at the end of the episode "Pirate Genie-in-a-Bottle!".

Pip is kind-hearted, cheerful, and energetic. He dreams of freedom, to have a big enough ship of his own to sail the vast Never Sea for adventure. Pip cannot disobey the commands of his master, even one such as Captain Hook. However, he can somewhat control the outcome of the wishes, depending on their word phrasing. Pip likes to travel and leaves to see the wonders of the Never Sea upon gaining his freedom but he feels that his true home is Never Land. He seems to show up sometimes whenever he heard someone making a wish.

As shown through the course of the series, Pip could easily break the laws of nature, shape-shift himself and others into anything and warp reality at a whim, such as shrinking the Jolly Roger into the size of a toy and creating a magic lamp that can turn others into a genie. He can also sense other genies using their magic to grant wishes. However, he does have his limits to his abilities as seen on his debut: he needs to return to the Treasure Wishing Well to restore his power as it isn't endless or self-replenishing and in the episode "Trouble on the High Sneeze", Belch Mountain's dusty burps causes Pip to sneeze random wishes which affects his ability to control his magic. Aside from these two limitations, he seems virtually-omnipotent.

Pip first appeared in the episode "Pirate Genie-in-a-Bottle!" where Jake and his crew discover Pip's ship-in-a-bottle and couldn't wait to make wishes of their own. But as Pip attempt to make their wishes come true, he would accidentally conger up frogs as his magical powers are running out. He knows of a location in Never Land called the Treasure-Wishing Well in order to restore his powers. While on the hunt for the well, Pip is asked by the young pirates what he would wish for. Pip admits he would wish for a ship of his very own so he'd sail the Never Sea, however, pirate genies aren't allowed to grant their own wishes. During their travel to the Treasure Wishing Well, Pip's ship-in-a-bottle gets stolen from Jake and his friends by Captain Hook and his scurvy crew. When they soon realized that Pip can't grant wishes as he was, they continued onward to the Valley of Nowhere to find the Treasure Wishing Well to restore Pip's powers.

With Pip's powers restored and his ship-in-a-bottle still in Captain Hook's grasp, he had no choice but to grant Hook's wishes. While bickering with his crew, Hook's words were taken literately by Pip, transporting Hook and his crew back to the Jolly Roger, wasting Hook's first wish. Captain Hook orders the rest of his crew to make wishes on his behave. Hook's second wish (Bones') was to fill his ship with lots of gold but this was short-lived as the gold made the Jolly Roger too heavy, forcing Hook and his crew to abandon ship as all the gold spills over from Hook's ship into the Never Sea. Hook's third wish (Mr. Smee's) was for a treasure chest full of gold in a location safe from both puny and thieving pirates but much to Hook and his crew's horror, the location Pip transported them to was Crocodile Creek where Hook and his men are chased from the creek by Tick-Tock the Crocodile.

For Hook's final wish (Sharky's), he got a mountain of gold but in the end, Hook's greed does him in. He causes a golden rock-slide when Hook slams his Pickaxe-Hook into the mountain, sending Hook and his crew falling to their doom. Luckily, Jake and his crew were sailing nearby to find Pip and decided to help. Izzy used her pixie dust to rescue Hook and his crew but unfortunately, the model ship inside Pip's ship-in-the-bottle was damage. Jake and his crew return to Pirate Island with Pip who couldn't wait to grant his young friends their wishes but Jake and crew decide to grant Pip a ship of his very own. The now-free Genie thanks the young pirates before setting sail from Pirate Island.

In the episode "Pirate Genie Tales", Jake and his mates gather around the campfire on Pirate Island when Pip the Pirate Genie pays them a visit, sharing fabulous tales of his travels around the Never World: Singbad the Sailor and Skully Baba and the Treasure Thieves.

Pip reappears in the episode "Trouble on the High Sneeze". Due to Belch Mountain's dusty burps, Pip can't stop sneezing which affects his ability to do magic. Jake and his mates set out to Misty Cove where its magical mist will cure Pip of his sneezes while dealing with the random magical effects of them.As Jake and his mates set out to Misty Cove which magical mist will cure Pip of his sneezing but as the pirates journey to the cove Pip accidentally transform Captain Hook into a crab.While the pirates travel to the cove they had to traverse through the Dusty Bucket Forest. But unfortunately Sharky and Bones stumble into one of the trees causing Pip to sneeze, turning Jake into a monkey and capturing the other pirates in large bubbles. Fortunately Captain Hook manage to pop the bubbles thanks to being turn into a crab earlier by Pip's sneezing. Izzy uses her Pixie Dust to allow everyone to safely land from the fall. After a long journey Pip is cured of his sneezing and restores Jake and Hook back into their proper forms.

Pip reappears in the episode "Smee-erella!" playing a fairy godmother-like role in the episode. Mr. Smee accidentally causes a big mess on the Jolly Roger, angering his captain. Afterwards, Captain Hook cruelly forbids Smee from attending Red Jessica's Pirate Con held on Crimson Isle to attend to his unintentional mess on the Jolly Roger and to keep an eye on it until the Pirate Ship Parade. Jake and his crew soon arrive at the island and notice Mr. Smee; They ask if he was going to the Pirate Con. However, Smee explains to the young pirates how he'd wish he could go to the party and meet First-Mate Mollie. When Pip appears, hearing Mr. Smee's wish, he helps him by restoring the Jolly Roger's former glory. Next, Pip shrinks the Jolly Roger to the size of a toy, allowing Mr. Smee to keep an eye on the ship and enjoy the party. Pip also summons a golden sail wagon like carriage and Tick-Tock the Crocodile serving as a horse for the carriage.

Finally, Pip bestows Mr. Smee with a proper captain attire and enchanted golden boots that only Smee can wear. Before he departs, Pip gives Smee a word of caution: at the sound of the third foghorn, the spell will be broken and everything will return to normal. Grateful for the gifts, Mr.Smee thanks Pip and happily rides off to the Pirate Con. During the dance at the convention, Pip was seen dancing with the Pirate Princess. Pip was alongside Jake and his crew when warning Mr. Smee about the time and seeing him back to the dock before the third foghorn blast. Pip is last seen sailing his ship in the pirate ship parade.

Pip reappears in the episode "Hook the Genie!". Captain Hook gets turned into a genie by a magic lamp after swiping it away from Bones. Cubby suggest that they get Pip's help to restore Hook to his former self. Pip suggests that they journey to Mount Olampus to find the old lamp maker who could help break the spell. After Captain Hook finally feels guilty for his selfish action and showed a sign of kindness, Hook is turned back to normal. The old lamp maker was none other than Pip in disguise, explaining that he made the lamp to teach greedy, grabby people a lesson.

Pip makes a nonspeaking cameo appearance in the episode "Captain Scrooge ", he can be spotted taking part in the great pirate feast at the end of the episode.

Pip reappears in the episode "Dread the Evil Genie",Jake and his crew soon summon Pip to reunite the new genie who claims to be a old friend of Pip.Pip was happy to see his pirate friend,but his joy his soon replace with fear when he spots Dread, as he cowers behind Jake and his crew. Pip explains that Dread isn't a friend but a power-hungry fiend that consumes other genies magic leaving nothing left. Dread attempts to attack Pip, but thanks to Jake and his crew, they manage to escape with Dread in pursuit.Jake and his crew briefly hide Pip within Stinkpot Swamp in order to evade Dread's detection.

However Jake and his crew are later captured by Captain Hook, allowing Dread the chance to drain Pip of his powers. Using his last bit of magic Pip attempts to fly away but in the process, he summons a large swarm of flies that swarm over Dread. Seeing his chance Pip attempt to retrieve Dread's bottle, as both genies battle over bottle,Pip soon gets the upper hand and gain his magic back as forces Dread back into his bottle. Pip then flings Dread's bottle deep into the Never Land Desert hoping no one will ever see Dread again.

While not having anything to do with the plot of the episode Pip makes a brief cameo appearance in "The Legion of Pirate Villains!" During the post-credits Jake and Captain Colossus are seen in the Never Land Desert when they stumble upon a lamp as Colossus rubs it and Pip emerges from the lamp. Pip is later seen riding the Mighty Colossus with the rest of Jake's Never Land friends. 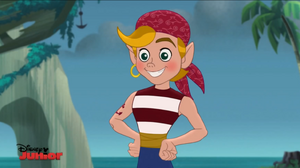 For more pictures and screenshots of Pip the Pirate Genie, click here.

Retrieved from "https://jakeandtheneverlandpirates.fandom.com/wiki/Pip_the_Pirate_Genie?oldid=91803"
Community content is available under CC-BY-SA unless otherwise noted.