"It can't be too cold if you ask me".
"According to penguin legend, there's a paradise of ice and snow where it's winter all year long. It's called Chi-Chi-Chilly Canyon.
This statue is very special to my fellow penguins. Our new home wouldn't be a home without it.
Shade? Did you say shade? That sounds cooler. Let's get waddling.
Hoo! The heat. I'm about to have a penguin meltdown.
" Frozen tundra!
You young pirates are sharper than a walrus' tusk. Thanks for helpin'.

Percy is a recurring character from Disney Junior's television series Jake and the Never Land Pirates. He's a small anthropomorphic penguin that becomes friends with Jake and his crew. He is voiced by Rhys Darby.

As Percy revealed during his debut he and his colony originally lived on a small patch of ice somewhere within the middle of the Never Sea before coming to the island of Never Land. Do to there first icy home melting away. Percy set off alone with a signal beacon-like statue to find Chi-Chi-Chilly Canyon setting the stage for when he meets Jake and his crew in "Jake's Cool New Matey."According to Percy Chi-Chi-Chilly Canyon is an icy paradise of penguin legends it is a section of Never Land that is always cold all year long and the ideal home for Percy and the rest of his colony.

Percy is a fun-loving, charismatic, and adventurous penguin setting off into uncharted territory to help his colony. Percy quickly became friends with Jake and his crew during their first meeting and is always willing to aid his pirate friends whenever he can.

Percy first appeared in the episode "Jake's Cool New Matey". He washed on to Pirate Island beach on an ice raft. He was on the search for a new home for himself and his penguin colony called Chi-Chi-Chilly Canyon located somewhere on Never Land, where it's winter all year round. Jake and his crew agreed to help Percy on his search for his new home which was located on the other side of Never Peak Mountain. While on their travels, Percy brought along a statue that Captain Hook plotted to steal from the sea pups and Percy.

Jake and his friends finally make it to Chi-Chi-Chilly Canyon and Percy was thrilled to be in his icy paradise and reviled to his new friend that the statue was a beacon to summon his colony. Hook and his crew confront the little penguin and the puny pirates and demands that hand over the statue, they refuse resulting in a snowball fight between both pirate crews Hook soon gain the upper hand on Jake and his crew but Hook didn't count on their reinforcement Percy's colony to turn the tide driving Hook and his crew back to the Jolly Roger.

Percy reappears in the episode "F-F-Frozen Never Land!" with Never Land covered with ice and snow it was the perfect time for the little penguin to visit his friends on Pirate Island no sooner then Jake,Izzy and Cubby were head out to Never Land to find the Fire Red Rubies located in Fire Red Ruby Valley would cure Skully of his Birdy flue,Percy agreed to assist his friends find the rubies enduring the many trials of a frozen Never Land. Captain Hook also desired the rubies to free the Jolly Roger which was stuck within frozen a frozen Never Sea.

Percy reappears in the episode "The Arctic Pearl" while sledding with Jake and his crew he decides to return back to his penguin colony, Percy notices his friend Pearl is missing and decides to search for her. Later Percy soon finds Pearl in a small chasm with the assistance of Jake and his crew but this is short-lived when Captain Hook and his crew arrive miss heard Percy, believing he in search actual pearl cause an avalanche causing Percy to get separated from Jake and his crew and with Captain Hook and Bones. While waiting for Jake and the others to find them Percy makes an igloo so Hook and Bones can get out of the cold, later when the storm past Percy is soon reunited with Pearl.

Percy reappears in the episode " The Legendary Snow-Foot!", Jake and his crew help Percy set off in search of the legendary Snow-Foot, a yeti that inhabits the far regions of Chi-Chi-Chilly Canyon. Percy later befriends Snow-Foot who isn't quite the feared creature of the canyon but a shy little yeti child.

Percy reappears "Into the Heart of Coldness", he was skeptical of a new visitor who has enter Chi-Chi-Chilly Canyon, promising his colony the perfect icy paradise on an icy summit. But it turns out it was a merely a trap set up by that wicked wizard ShiverJack . Percy accompanies Jake and his crew as they journey to ShiverJack's frozen fortress and rescues Pearl and the rest of the penguins.

While not physically appearing in the episode "Jake's Cold-Hearted Matey", Percy and his colony are briefly mentioned by Jake as he suggests that ChillyZack stay in Chi-Chi-Chilly Canyon and the penguins would look out for him.

Percy reappears in the episode "Tales of Captain Buzzard." He appears as a Troll in Captain Buzzard's tale of the Knights of the Round Tower portrayed by Jake and his crew. Jake and his crew most past Percy's sword bridge in there quest to find the Golden Goblet. It's Percy job to test knights to see if they have the courage and valor to proceed with the quest. While Jake and Izzy manage to past the test using there wits Captain Hook cheats by distracting Percy by pulling the penguin hat over his eyes allowing the sneaky pirate knight to cross the sword bridge with little effort. Percy is last seen finally free from his hat and cursing Hook for his bad form. 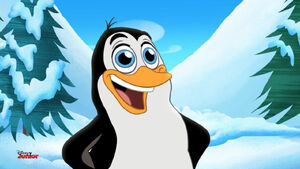 For more pictures and screenshots of Percy, click here.

Retrieved from "https://jakeandtheneverlandpirates.fandom.com/wiki/Percy?oldid=90087"
Community content is available under CC-BY-SA unless otherwise noted.