Barking
Patch is a supporting character from Disney Junior's television series Jake and the Never Land Pirates. He is Jake, Izzy and Cubby's pet puppy. His vocal effects are provided by Dee Bradley Baker.

How Patch met Jake and origins all together are currently unknown. Patch is Jake and his crew's loyal friend. Although he does not appear often with his pirate friends, their friendship is easily seen.

Like all puppies Patch is playful and fun-loving. He has a tendency to gnaw on pirate boots. Despite his small size Patch is brave able to venture across the vast Never Sea, sneak aboard Hook's ship and take one of his boots. Once confronted by the captain he doesn't give up the boot. Patch has been proven to be quite smart easily evading Hook and his crew as they chase him across the deck of the ship to the shores of Never Land.

Patch first appeared in the episode "The Pirate Pup!" the rambunctious pup sneaks aboard the Jolly Roger and runs off with one of Captain Hook's boots. Causing Hook and his crew to chase Patch all across Never Land in an attempt to retrieve his boot back.Patch manages to give Hook and the crew the slip when the Jolly Roger docks on Never Land as he quickly races to Shipwreck Beach with Hook and his crew in hot pursuit.Jake and his crew manage to spot Patch hiding among the wrecks as they where coming ashore.In order to give Patch a means to escape Jake and his crew make barking noises to confuse Hook and his crew,allow Patch to flee deeper into the Never Land Jungle and into Hurdle Hill. Izzy informs the viewers to guide Patch safety into the right path leading to Butterfly Bluff. Patch does as instructed. Hook and his crew soon end up in the fork in the road, Mr. Smee suggest they follow down the right path as the young pirates said, but Hook refuses to listen to both Smee's and the puny pirates words and orders his crew to follow him down the left path sending the Jolly Roger crew plummeting into the muck of Stinkpot Swamp. Patch finally end up at Butterfly Bluff where he proceed to gnaw on Hook's boot until Patch is confronted by the captain, demanding his boot back.Patch attempts to flee but stumbles on to the back of one of the giant butterflies which allows him to fly.Hook and Smee soon give chase by hitching a ride on the back of one of the giant butterflies.Captain Hook attempts snag Patch and his boot with his Butterfly net-hook, but Patch manages evade the net but falls off the giant butterfly,resulting fortunately for Patch he is rescued by Jake and his crew by using the power of Izzy's pixie dust. Hook frustrated that he failed to catch Patch cures the giant butterfly for not flying faster,causing the large insect to toss both Hook and Smee off its back sending the villainous duo crash landing in a brush bellow.Hook while little shaken demand for his boot back, which Jake and his friends soon return to him as they suggest that they all he had to do was ask nicely and Patch would have returned it sooner.However Hook's boot was left mangled and drooled cover much to his dismay.Jake and his crew accompanied by Patch return back to Pirate Island to place the gold doubloons from there adventure into the Team Treasure Chest. Jake suggest that Patch stay with them,which he happily agrees.Cubby then appears asking has anyone seen his missing boot,resulting in Patch finding it on the beach and racing across Pirate Island with Jake and his crew-mates giving chase.

Patch returns in the episode "The Golden Smee!" were the rambunctious puppy discovers a golden statue that resembles Mr. Smee while exploring with Jake and his crew on Never Land. Later in the episode Patch aided Jake and Hook's crew to locate Mr. Smee who has taken the cursed statue of the Smee's to Belch Mountain. After Hook and crew are saved by Izzy and her pixie dust from the fiery bowels of Belch Mountain.Mr. Smee thanks the sea pups for saving him, his captain and the rest of the crew. Smee notices Patch was looking pretty glum after the adventure and tries to comfort the puppy. Cubby reveals that Patch was sad because he was the one who the Golden Smee in the first place. Smee rewards Patch with a bone to lift the pup's spirit, which Patch happily takes as he began to gnaw on the bone. Patch is last seen at the end of the episode back on Pirate Island burying the bone on the beach.

Patch reappears in the episode "Little Red Riding Hook!" he accompanies Jake and his crew to Shipwreck Beach. Patch manages to uncover various treasures when he hears the other Pirate Pups calling him. Patch soon rush into the Never Land Jungle, forgetting to take the treasures with him, so Izzy decides to deliver the basket of treasures to Patch while Jake, Cubby and Skully make sure Patch didn't leave any other treasure behind. Unknown to Jake and his crew-mates Captain Hook and Mr. Smee were spying on them within the nearby shipwrecks. Captain Hook desired to claim the basket of treasure for himself and tries to steal it from Izzy. Later Patch and the other Pirate Pups confront Hook and Smee as they try to escape with the basket but during the chase slip down a cliff only to rescued by Izzy and her pixie dust. With everyone safe and Patch's Pirate Pup friends chasing Hook and Smee away. Izzy returns the basket of treasures back to Patch. Patch is last seen rejoicing to receive his basket of treasures back as he races over to Izzy and jumps into her arms and start licking her face as thanks as Izzy snuggles Patch.

Patch's only appearance in the printed media is the storybook adaption of The Pirate Pup. Similar to the episode, Patch runs off with one of Captain Hook’s boots, Hook vows to catch up to the boot-nappin’ pooch and get his boot back, resulting in a chase from the deck of the Jolly Roger all the way to the shores of Never Land. Jake and his crew are on a mission to help save Patch from capture.

Patch is featured in the Disney Junior online game "Plundering Pup" which is loosely based upon the episode "The Pirate Pup". In the game "Izzy's Pet Puzzle!" Izzy has to catch Patch who steals one of Captain Hook's boot again and has fled into the Never Land Jungle. 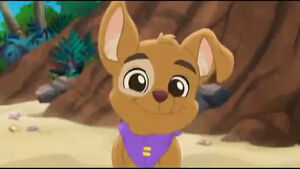 For more pictures and screenshots of Patch the Pirate Pup, click here.

Retrieved from "https://jakeandtheneverlandpirates.fandom.com/wiki/Patch_the_Pirate_Pup?oldid=90926"
Community content is available under CC-BY-SA unless otherwise noted.