"Rise of the Pirate Pharaoh"

Otaa is a character from the Disney Junior series Jake and the Never Land Pirates. He is an anthropomorphic mummified sphinx cat that serves the legendary Pirate Pharaoh. He is voiced by Jeff Bennett.

Not much is known about Otaa life before or how he died other then he is a devoted servant to the Pirate Pharaoh back when the Pharaoh Valley was still a lush paradise within the Never Land Desert. He along with his Pharaoh were later sealed away by the wicked Queen Patra Cleo when she turned Pharaoh's Valley into a baron wasteland, locking away the waters of the Never Nile away in a mountain.

Otaa is very loyal to the Pirate Pharaoh do to there long history together. He thinks about nothing but pleasing his master believing he can do no wrong. He can be a bit of a wiseguy making smart remarks towards the other characters. Even as the Pirate Pharaoh tries to restore his kingdom to its former glory Otaa tries to give advice and guidance to the Pharaoh, not just because it's his job but also because he is kind and fond of the master. Otaa, as seen in his debut, shows actually cat-like manners as when he was brought back to life he quickly asks the Pharaoh for some fish. Another example of his feline mannerisms is in the episode "Mummy First Mate" Otaa is shown that he has a fondness of chasing Skully but, Skully is shown to be too swift and clever for Otaa. During there teamwork besting Captain Hook, Skully comments cats aren't so bad only for Otaa to reply there more to birds then just being for breakfast.

Unlike most animals, Otaa is perfectly capable of human speech (though it remains to be known whether he was taught this or a magic spell was used).

Otaa reappears in the episode "Dread the Pharaoh!", Otta's amuses his self while playing in the desert he stumbles upon Dread the Evil Genie's bottle and releases him. Otaa was thrilled to have all the wishes he ever wanted and wish to help his master. Dread inform Otaa he lost his power and can't help. Otaa soon loses interest in the ex-genie Dread returning to Pharaoh's side. Later with the assistant of Skorpio the Scorpion, Dread manages to steal both the Pirate Pharaoh's magical crook and flail before casting Otaa and his Pharaoh out of the desert. The Pirate Pharaoh was furious at the loss of his power and kingdom and didn't know what to do, Otaa suggests getting Jake and his crew help to deal with Dread. Otaa is last seen thanking Jake and his crew alongside his master after returning his powers and casting Dread and Skorpio the Scorpion out of his kingdom.

Otaa reappears with the Pirate Pharaoh in the reappears in the episode "Mummy First Mate". The Pharaoh barges into the Pirate Mummy's tomb for the Mummy demanding he becomes his first mate and helps him find a magical elixir, much to the dismay of the Pirate Mummy who reveals he finds the Pharaoh a tad intimating. Jake and his crew tag along to keep the peace between both the Mummy and Pharaoh. Unknown to the hero's Captain Hook and Mr. Smee overhears the Pirate Pharaoh mentioning a magical elixir which Hook manages to steal transforming him into a giant. Otaa and Skully played a key element in distracting Hook allowing Jake and his friends to defeat the villainous captain and save the elixir. 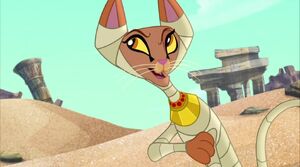 For more pictures and screenshots of Otaa, click here.

Retrieved from "https://jakeandtheneverlandpirates.fandom.com/wiki/Otaa?oldid=89839"
Community content is available under CC-BY-SA unless otherwise noted.