Jake and the Never Land Pirates Wiki
Register
Don't have an account?
Sign In
Advertisement
in: Characters, Animals, Males,
and 8 more

"Save the Coral Cove!"

The Octopus
The Beast
The Treasure with Eight Arms
Mr. Octopus

To eat Captain Hook, whom he believes is a fish

Tentacles
The Orange Octopus is a recurring character from the Disney Junior animated series, Jake and the Never Land Pirates. He is a mischievous octopus who inhabitants the Never Sea and occasionally serves as a foil for Captain Hook. His vocal effects are provided by Dee Bradley Baker.

The Orange Octopus first appeared in the episode "Save the Coral Cove!". Captain Hook sets out to find the legendary Treasure with Eight Arms with Mr. Smee using his treasure digging machine in search of the treasure threatening destroy the Coral Cove the home of Sandy the Starfish and the other Never Sea creatures in the process. But by the end of the episode the Treasure with Eight Arms was revealed to be none other than the Orange Octopus who begins attacking Hook and Smee, sending the duo fleeing back to the Jolly Roger.

The Orange Octopus reappears in the episode "Pirate Rock!", where he was invited to attend Jake and his crew's pirate rock concert, held at Pirate Rock, with the rest of the young pirates' Never Land friends.

The Orange Octopus plays a larger role in the episode "Captain Hook's Hooks", when he creeps aboard the Jolly Roger and steals eight of Captain Hook's hooks from Sharky and Bones, before fleeing back into the Never Sea. Knowing they will have to walk the plank if the captain finds out, Sharky and Bones travel to Never Land and team up with Jake and his crew to retrieve the eight stolen hooks. They are retrieved and the hooks have been resorted. However, in the mix of getting them back, the hooks are even more filthy. Sharky and Bones are forced to walk the plank, but are caught by the Octopus down below, who bounces them on his tentacles for fun. Smee joins in the fun with Captain Hook, deciding to forgive Sharky and Bones, joining in as well.

In the episode "Cubby's Pet Problem", the Orange Octopus and Tick-Tock the Crocodile both appear by the end of the episode, attacking Hook together aboard the Jolly Roger. This episode marks their first appearance together, much to Hook's horror and humiliation.

While not having anything to do with the plot of the episode, the Orange Octopus makes a brief cameo appearance in "Jake's Royal Rescue". The Octopus can be seen with Tick-Tock Croc as Queen Coralie makes her way through the depths of the Never Sea.

The Orange Octopus plays a larger role in the episode "Trading Treasures". Jake and his crew are sent by Queen Coralie to retrieve her Golden Glam-Shell from the Octopus, who has been admiring his newly discovered golden treasure at Tentacle Bay. Jake and his crew offer various items, but the octopus refuses. Seeing how the Octopus enjoys the shiny shell, the young pirates offer to trade it for a diamond from the Pirate Princess, much to the delight of the Octopus. While Jake and his crew set sail to Pirate Princess Island to retrieve the diamond, Captain Hook and his crew arrive at Tentacle Bay. Hook was determined to claim the Golden Glam-Shell for himself, but as the captain attempted to swipe the shell, he finds himself in the grasp of the Octopus, who slings Hook around like a rag doll, tossing him back onto the shore of the bay. Hook refuses to let the Octopus stand in his way, but the result was the same, even with the assistance of his bumbling crew. Jake and his crew soon return to Tentacle Bay with the diamond, but as Jake and the octopus were in the middle of their trade, Hook swoops in and manages to steal both treasures. This is short-lived, as Hook gloats, the captain and his crew are captured yet again by the octopus, who begins to juggle the pirate crew. Seeing their chance to save the Glam-Shell, Izzy use her pixie dust granting the octopus flight, who drops Hook and his crew back into the sea to flee, finally allowing Jake and his crew to trade for the Glam-Shell. The Octopus is last seen creeping aboard the Jolly Roger, forcing Captain Hook to dance with him to the music coming from Queen Coralie's Fin and Frolic dance party.

The Orange Octopus reappears in the storybook All Hands On Hooks. The story is loosely based upon the episode "Captain Hook's Hooks". When Captain Hook orders Sharky and Bones to clean every hook in his precious Cabinet of Hooks, the bumblers accidentally hand off eight of the hook-treasures to the playful Octopus–who runs off with them! While Mr. Smee substitutes found objects to keep Hook from finding out about the missing hooks, Sharky and Bones team up with Jake and his crew to retrieve them.

The Orange Octopus appears in the Disney Junior app "Jake's Never Land Pirate School App". He can be spotted during the Map & Spyglass segment, while learning to navigate Never Land with Cubby and using the spyglass to find exciting treasures with Jake. 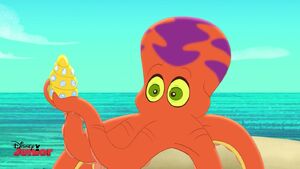 For more pictures and screenshots of Orange Octopus, click here.