Start a Wiki
The Never Sea Compass is a magical compass once belonging to Peter Pan who give it to Cubby to aid Jake and his crew.The compass has the power to point out the direction of the Mighty Colossus hidden deep beneath the Never Sea.

The Never Sea Compass first appeared in the episode special "Captain Jake and the Never Land Pirates: The Great Never Sea Conquest". Cubby uses the compass to guide his mateys on the search for Captain Colossus's sunken battleship the Mighty Colossus and it's treasure.The compass leads the young pirate team to Tortuga Triangle where the Mighty Colossus is said to go down.Before Jake and his crew could finish there search Captain Hook arrives who has been following Jake and his crew.Using a rocket attach to a grappling-hook is able to send the young pirate team packing,causing Cubby to drop his compass into the Never Sea. After failing to uncover the Mighty Colossus's treasure, Captain Hook soon concludes that he fallen for a puny pirates trick and chase and decides to search for treasure elsewhere.However the Jolly Roger's anchor soon get caught in some rock.But Hook manages to force his ship free accidentally releasing the evil mer-wizard, Lord Fathom in the process.As Fathom makes his way to Neptune City unaware that the Never Sea Compass lies at the ocean floor next to the remains of the Mighty Colossus.When Jake and the League of Never Sea Captains: (Himself, Captain Hook, Captain Flynn, Captain Frost, and Beatrice Le Beak.) The League tries to stop Lord Fathom but he's too powerful so Jake decides that they need to regroup somewhere Lord Fathom can't find them and devise a new plan of action to defeat him.Jake's Destiny Sword suddenly makes the Mighty Colossus rise out of the water and makes him it's captain.Cubby recovers the Never Sea Compass on aboard the Mighty Colossus. 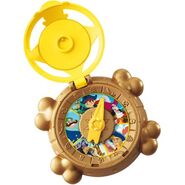 Add a photo to this gallery
Retrieved from "https://jakeandtheneverlandpirates.fandom.com/wiki/Never_Sea_Compass?oldid=81483"
Community content is available under CC-BY-SA unless otherwise noted.