Jake and the Never Land Pirates Wiki
Register
Don't have an account?
Sign In
Advertisement
in: Locations, Mountains, Locations in Never Land

Never-Ever Peak Mountain, also called Never Peak, is the largest mountain in the middle of Never Land featured in the Disney Junior animated series, Jake and the Never Land Pirates. It is the home of the Never Bird, and is also right next to Belch Mountain, a volcano that is also on Never Land. Jake and his crew have been to the top of Never Peak many times on their adventures.

Never Peak makes its formal appearance in the episode "Never Say Never!", where Captain Hook sends the Never Bird to swipe Izzy's hula hoop so that he may replace his destroyed ship wheel. After she successfully retrieves it, she betrays Hook and takes it herself to Never Ever Peak Mountain.

Never Peak reappears in the episode "The Sky's the Limit!", where Jake and his crew are flying kites on a very windy day on Pirate Island. When Captain Hook sees how much fun they are having, he tries to make a getaway with the crew's kites so he can fly them with Mr. Smee, but as the villains try to make their getaway, the combined force of the wind pulling on the kites cause Captain Hook's hook to come off. The kites fly all the way to the top Never Ever Peak Mountain, where they get snagged on a palm tree.

In the episode "Race to Never Peak!", Captain Hook manages to steal the sea pups' soccer ball and takes it back to Never Land. Jake and the crew must find their soccer ball on Never Peak Mountain, where it ends up after Hook kicks it into a cannon on Shipwreck Beach.

Jake and his crew visit Never Peak, yet again, in the episode "The Golden Egg". Jake and his crew stumble upon a golden egg and ask the Never Bird whether it is hers. She claims it is not, but decides to join them in their quest to find the parents.

In the episode "It's a Winter Never Land!", Jake, Izzy, Cubby and Skully wake up and discover that Peter Pan has left presents and a Forever Green Tree for the crew on Winter Treasure Day. Captain Hook steals the presents and the Forever Green tree and flees to Never Peak. Jake and his crew try to retrieve the gifts and tree, but fail. Hook is delighted that he finally managed to steal treasure from Jake, and offers Smee and the rest of the crew some of the presents. However, Smee, Sharky and Bones could not enjoy the gifts, feeling sorry for Jake and his crew. Later, Captain Hook and his crew arrive, and it seems that Hook has had a change of heart, and with the help of Mr. Smee, Sharky and Bones, he returns all the gifts and the tree.

Never Peak reappears in the episode "Race-Around Rock!", where Jake, Izzy, and Cubby have all made sail wagons for a big race to Race-Around Rock. Captain Hook and Mr. Smee overhear the young pirates and become interested in the race. The starting line to the race takes place at the top of Never Peak.

In the episode "Sail Away Treasure", Jake and his crew were sailing near Shipwreck Beach when they come across a tiny shipwreck with a bird figurehead on the front. The young pirates thought it would be perfect for Skully, so Jake and the crew decide to fix up the old ship and give it a new coat of paint. Skully calls his new ship the Leaky Beak. When the crew lets down the sail, they discover a treasure map on it. The map led the young pirate team to a treasure on Never Ever Peak Mountain, were they discover a tiny treasure chest, but they were unable to open it, so they soared off to SkyBird Island to learn what lies within the chest.

Never Peak makes a brief reappearance in the episode "The Remarkable Beardini!", after Captain Hook tricks Beardini the Pirate Magician to believe that Jake stole his Invisibility Ring. Beardini teleports Hook and Smee to the top of Never Peak to prevent the villainous duo from stealing any of his magical secrets from his lair, while he went to reclaim his ring.

Never Peak makes a brief appearance in the episode "Flying Fly", where Jake explains to the viewers how flying can come in handy in recovering their presents back from Captain Hook.

Never Peak makes a brief appearance in the episode "Dancing with Pirates", where Jake explains to the viewers how pirates have a lot of tasks to do. As Jake looks through his spyglass, he spots the Never Bird taking the Izzy's Hipster Twister Hoop as she flies to the top of Never Ever Peak Mountain.

Never Peak has made various appearances in video games, usually seen within the background. It makes a brief appearance in the Disney Junior online game "Jake's Lost Story Quest", as Jake and the Darling siblings try to recover the missing pages from Wendy's Book as they explore Never Land.

Never Peak makes a brief appearance in the Disney Junior online game "Izzy's Pet Puzzle!", while Izzy is trying to catch Patch the Pirate Pup, who ran off with one of Captain Hook's boot.

In the "Quest For the Four Swords" Disney Junior App game, in order to save Captain Hook and Mr. Smee, Jake sets across the island of Never Land, searching four legendary magical swords. During his travel, Never Peak makes an appearance. 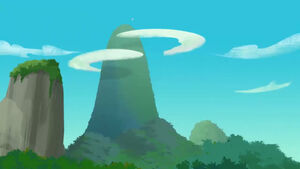 For more pictures and screenshots of Never Peak, click here.