Jake and the Never Land Pirates Wiki
Register
Don't have an account?
Sign In
Advertisement
in: Animals, Females, Characters,
and 7 more

"Mystery of the Missing Treasure!"

The Never Bird from the novel Peter and Wendy by J. M. Barrie

Neverbird (as spelled in the novel)

“Listen up, Never Bird! Go to Pirate Island and get that hoopy-loopy thing from those puny pirates. And don't disappoint me!”
―Captain Hook

The Never Bird is a recurring character from the Disney Junior animated series, Jake and the Never Land Pirates. She is a bird that lives on top of Never Peak, the largest mountain located on Never Land. Her vocal effects were provided by the late Russi Taylor.

It is currently unknown when or how the Never Bird met Captain Hook, but after that faithful encounter, the Never Bird served Hook as his henchmen until the episode "Never Say Never!". However, Hook does reveal some insight on the Never Bird in her debut, speaking about the bird in high regard before summoning her and seeing her as more codependent and resourceful henchmen, compared to even Mr. Smee and the rest of his bumbling crew at the time.

The Never Bird first appeared in the episode "Never Say Never!". Here, she works for Captain Hook and is ordered to steal Izzy's hipster twister hoop so that he may replace his ship's wheel. After she successfully retrieves it, she betrays Hook and takes it herself to Never Ever Peak Mountain, sometimes called Never Peak, where she resides and uses it as a decoration for her nest. Izzy and her crew reach the mountain and finds that she has used the hoop to create a nest. Using some vines, Izzy replaces it and becomes a friend of the Never Bird.

In the episode "Pirate Rock", the Never Bird was invited to Jake, Izzy and Cubby's concert held at Pirate Rock.

In "It's a Winter Never Land", the Never Bird attended Jake and his crew's holiday celebration held on Pirate Island.

The Never Bird was among Jake's Never Land friends who greeted him back on Pirate Island for his birthday celebration in "Jake's Birthday Bash!"

The Never Bird reappears in the episode "Mystery of the Missing Treasure!", when Jake and his crew found a feather left behind by the culprit who stole the Team Treasure Chest on Pirate Island. Skully suggests they journey to Buccaneer Bird Bluff. The young pirates ask the Never Bird, the Soprano Bird and the Sing-Songbird if they could identify the feather, however, the Never Bird and the Soprano Bird did not recognize the feather, but the Sing-Songbird revealed to the young pirates that the feather belongs to Fast Claw, the falcon of the sneaky thieving pirate, Beatrice Le Beak.

The Never Bird makes a brief appearance in the episode "Dancing with Pirates", Jake explains to the viewers that pirates have a lot of tasks to do, and as Jake looks through his spyglass, he spots the Never Bird flying to Never Ever Peak Mountain.

The Never Bird has made a few appearances in various printed material such as Birthday Bash and Winter Never Land. The Never Bird is featured alongside Jake, Izzy, Cubby, Skully and Winger on the cover of the Disney Junior Magazine Issue 16.

The Never Bird makes a brief cameo in the book, "My First Look Find Jake and the Never Land Pirates." she is featured on a cover of a book inside Captain Hook's Hidden Treasure Cave. 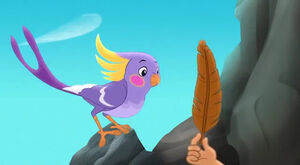 For more pictures and screenshots of Never Bird, click here.