"Greetings, me seafaring children!"
"I'm looking for me little James"
"She thought James might need a little help getting his ship shipshape!"

“I'm Nanny Nell. I helped Mama Hook take care of James when he was a wee little skipper.”
―Nanny Nell

Nanny Nell is a character from the Disney Junior series Jake and the Never Land Pirates. She is voiced by Jo Frost.

Nanny Nell is Captain Hook’s no-nonsense childhood nanny. As Nanny Nell revealed during her introduction to Jake and his crew she helped Mama Hook take care of James when he was a child.

Nanny Nell is very sweet and understanding. Nell is a motherly, kind, and genuine character with an optimistically pure heart. She is very fond of Captain Hook since he was a child, and even in the captain's adult life she always speaks with him with a gentle tone.

Nanny Nell makes her first appearance in the episode of the "same name", She arrives in Never Land with the assistant of her balloon when she comes across Jake and crew sailing the open Never Sea aboard Bucky when she ask if they could tell her where to find James, Jake, and his crew didn't recall any children on Never Land name James but Nanny Nell clarified James is now an adult and they might know him better as Captain "James" Hook. Much to the young pirates surprise. She has arrived on Mama Hook's behalf to help get the Jolly Roger in ship-shape condition. With the assistance of Jake and his friends, Nanny Nell soon arrive aboard the Jolly Roger where she is reunited with James much to the captain's delight to see his childhood nanny once more. Nanny Nell informs Hook why she has come to visit, Hook was grateful for Nanny Nell assistants needing all the help he can get with his bumbling crew entangle within the Jolly Roger rigging. As Nanny Nell shows Hook and his crew various means to keep their vessel in order, Mr. Smee began to believe he wasn't needed and abandons the ship. With the Jolly Roger in ship-shape condition Nanny Nell suggests that they go on a treasure hunt. Captain Hook knew of one treasure that he always desired but was never able to reach located in Danger River. Nanny Nell accompanied Hook and his crew into Danger River to locate a giant gold doubloon embedded in a cliff. Hook and his men tried to force it open but with no luck, it wasn't until Nanny Nell suggests using the Jolly Roger's anchor as a grappling hook to pry it open. Nanny Nell plan was a success but little did Nell or Hook know the giant gold doubloon was really a door sealing the Groogar (a legendary sea monster) within. Nanny Nell later finds herself within the grasp of the Groogar, Jake and his friends quickly come to Nanny Nell aid while Mr. Smee kept the Groogar distracted dropping Nell into Izzy and Cubby's arms as it tries to capture Smee. After Jake and Smee seal the Groogar back into its prison, Nanny Nell informs Smee that she'll assure Mama Hook with him around James will always be in good hands.

Nanny Nell reappears in the episode "Croctastrophy!", after some baby crocodiles imprint on Captain Hook, Jake and crew suggest finding Nanny Nell do to her experience taking care of babies she'll be able to help. Once Nanny Nell arrive they locate Captain Hook cornered by the baby crocodiles on Croc Snout Rock. Nanny Nell suggests Hook plays along with the babies do to them imprinting on him they'll follow anywhere so he can simple tire them out much Hook's dismay. After the baby crocs are fast asleep Hook attempt to leave them to fend for themselves but Nanny Nell reminds Hook if they don't locate the croc's mother they'll pursue Hook forever. Back on Shipwreck Beach Jake, his crew and Nanny Nell locate the mother crocodile trap within a net inside one of the old wrecks in order to free her without the fear of her turning on them,Izzy uses her Pixie Dust,returning the mother croc to her offspring. Jake and his crew thanked Nanny Nell for her assistance but she also shared the credit with James. Nanny Nell is last seen escorting Hook and his men back to his ship on hers when the group spied a golden glow coming from below. Fearing it to be another golden tailed crocodile Hook refuse to land and press forward back to the Jolly Roger. 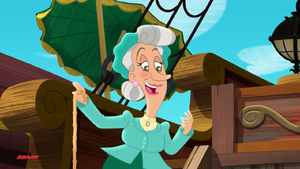 Retrieved from "https://jakeandtheneverlandpirates.fandom.com/wiki/Nanny_Nell_(character)?oldid=88338"
Community content is available under CC-BY-SA unless otherwise noted.