" Battle for the Book"

Nana from the novel of Peter and Wendy by J.M. Barrie

To protect the Darling family.

Caring for the Darling children

Being leased outside, being treated like a pet more than a family member

Nana is a minor supporting character from Disney Junior's television series Jake and the Never Land Pirates. She is the Darling family's pet St. Bernard. Nana act more like a nursemaid who help the Darling children get tuck into their beds before George Darling and Mary Darling go out.Her vocal effects are provided by Dee Bradley Baker.

During the events of the first film, Nana serves as Darling family's nursemaid and dog. Nana was first seen doing her daily duties; cleaning the nursery room and putting away the Darling children's toys. When Wendy is told she must grow up, she was shocked by the decision. When George Darling begins to storm out the room, he trips over Nana. Both Nana and George fall, but the rest of the family only comforts Nana. George is shocked, and this causes Nana to be put in the dog house outside. Nana is heartbroken, as she never sleeps away from the Darling children. George feels sympathy for Nana but claims the children are not puppies and Nana is truly a dog. Later when Peter Pan takes the children on a trip to Never Land, Nana spots the children flying out the window with Peter. Nana is horrified and tries to stop them. Michael spots Nana and sprinkles Tinker Bell's pixie dust on Nana causing her to fly but is held back by the leash preventing her from tagging along the adventure.

When the Darlings siblings return home from there Never Land adventure, Nana is overjoyed to be back in the house, as George finally realizes he's been too hard on Wendy and Nana. Sometime after the event of the first film, Wendy wrote the events of her adventure on the island in a book, so she and her brothers will never forget Peter Pan. Nana like the Darling siblings likes hearing Wendy's stories of Peter Pan.

Nana is very caring towards the Darling children and treats them as her own pups. The children cherish Nana as an important family gem. As revealed in "Battle for the Book" Nana enjoys listening to Wendy's many stories of the Darlings siblings adventures in Never Land.

Nana makes her first appearance in the series in the episode special,"Jake and the Never Land Pirates: Battle for the Book". Nana was seen alongside John and Michael enjoying Wendy's tale of Peter Pan battling the nefarious Captain Hook. But that sneaky snook Hook hates to look like a bumbling fool, so he decides to fly to London, England, steal Wendy's storybook, and destroy her stories once and for all. Back in London, just as Wendy and her brothers are getting ready to go to bed, Nana senses Hook breaking in attempting to steal the storybook. Nana attempts to stop the sneaky pirate captain biting his coat, but despite Nana and the Darling siblings combine might Hook gets the book and makes his escape into London. As John and Michael try to figure out what to do, Wendy decides to contact Peter to help them via a song that can alert Peter that she needs his help.

Peter assigns Tinker Bell to contact Jake and his crew, giving her his hat so he can speak to them through it to tell them what to do. When Tinker Bell finds Jake and his mateys, Peter explains the situation to them, and they set off on Bucky to head to London, being amazed by the sight of the British capital as they arrive to locate the Darling house.

When they arrive, the Darling children mistake them for being with Hook, but once Jake explains they're allied with Peter Pan, they set off on Bucky to find the Jolly Roger, which has become lost in the fog surrounding London. During the search, Michael begins to show signs of forgetting about Peter Pan and Never Land. When they find Hook, the team is forced to split up from Bucky to confront Hook on the Jolly Roger. In the scuffle, Hook escapes to the streets below, and while Jake, Wendy, Izzy, and John pursue him, Cubby, Skully, Michael, and Nana stay on the Jolly Roger to deal with Smee, Sharky, and Bones. When the balloon keeping the ship airborne is ruptured, the ship splashes down next to a dock, grabbing the attention of a late-night patrolling police officer who chases after Mr. Smee, Sharky, and Bones. By the time Jake, Wendy, and the others catch up to Hook, he's able to convince the officer that Wendy, Jake, and the kids are the bad guys, allowing him and his crew to escape back to the Jolly Roger as the fog clears so they can return to Never Land. Jake, Wendy, and the rest of the gang try to convince the officer of the truth, but it's not until he sees Tinker Bell himself does he realize he's been tricked and lets the kids go to pursue Hook, getting a kiss of thanks from Tinker Bell in the process.

By the time Bucky returns to Never Land, they've lost sight of Hook, however, remembering that Hangman's Tree's root tunnels may give a clue where Hook is going, Wendy takes Jake and his crew there to Peter's hideout.Once at Hangman's Tree the group uses the root tunnels to find Hook, only to find that the captain is heading for the Valley of Fury to destroy Wendy's book in the pit of blue fire located there. Along the way, Wendy begins to show signs of forgetting about Peter Pan and Never Land just like her brothers, but when Peter himself shows up, Wendy remembers, and the team head to the Valley of Fury.

Nana only appearance in the series printed media is the storybook adaption of Battle for the Book.

Nana only video game appearance in the series is the online game "Jake's Lost Story Quest." She can be spotted when Hook steals Wendy's book in the game's intro. Nana makes an appearance in one of the mini-games and a brief cameo appearance on one of Wendy's storybook pages. 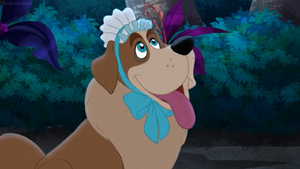 For more pictures and screenshots of Nana, click here.

Retrieved from "https://jakeandtheneverlandpirates.fandom.com/wiki/Nana?oldid=89921"
Community content is available under CC-BY-SA unless otherwise noted.