"Captain Buzzard to the Rescue!"

His adventures with Captain Buzzard, games

Brute strength
Monty the Minotaur is a character from the Disney Junior series Jake and the Never Land Pirates. He is a large Minotaur and the guardian of the treasure of Argos Island. He is voiced by Jim Cummings.

Much of Monty's past hadn't been revealed until "Minotaur Mix-Up!", where Monty revealed that he was once a meek scrawny human who had a rather miserable time at sea. As a young buccaneer, he was trained in the ways of a pirate, so that he would one day become a feared buccaneer. However, according to Monty, he was a somewhat pitiful pirate during his training and seemed hopeless for many years. It wasn't until he came across Argos Island in his travels and when he tried to take the treasure he was turned into a mighty Minotaur. Monty didn't miss his meek human form and felt his new appearance made him feel more like a pirate.

Years later Monty would serve under Captain Buzzard Bones for many years ago as his first-mate until he manages to get a ship of his own. Sometime after this event, Monty would return to Argos Island to protect the treasure from thieving pirates.

Monty, as a Minotaur, displays immense physical strength, which he uses as his primary weapon and intimidation. Monty is not just brute strength but can be quite clever making the various booby-traps on Argos Island, as revealed by Captain Buzzard, Monty trap craftsmanship was quite good during his travels as well.

Monty takes his job as the guardian of the treasure of Argos Island very seriously showing no sympathy for anyone fool-hearty enough to try to steal his treasure, whether young, old, male or female. He appears to be very stubborn and quick to act violently. However, when he reunited with Captain Buzzard who almost didn't recognize him without his beard, the two laugh reminiscing of the good old days at sea.

Monty reappears in the episode "Minotaur Mix-Up!" Jake and his crew were enjoying playing a game of pirate checkers with Monty. Later Captain Hook confronts Monty challenging him for treasure. Monty scoffed at Hook's remark and asked what the challenge. Hook uses a pirate pattle ball and rigged it to fail when its Monty's turn playing at the Minotaur's great strength causing Monty to lose. Hook soon gloats over his victory as he is quickly transformed into the Minotaur of Argos Island to obtain the Minotaur’s legendary treasure. Monty is soon reverted into a meek scrawny human sailor do to Argo Island only allows one guardian. Monty later challenges Hook to Minotaur obstacle course around the island to change back into a Minotaur. 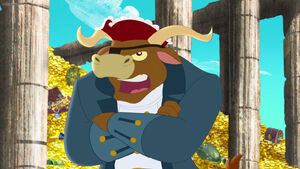 For more pictures and screenshots of Monty the Minotaur, click here.

Retrieved from "https://jakeandtheneverlandpirates.fandom.com/wiki/Monty_the_Minotaur?oldid=91634"
Community content is available under CC-BY-SA unless otherwise noted.