Playing the bongos, swinging through the trees, bananas

The Monkey is a mischievous primate from the Disney Junior television series Jake and the Never Land Pirates. His vocal effects are provided by Dee Bradley Baker.

The Monkey makes a brief cameo appearance in the episode "Hats Off to Hook!," as Captain Hook is consistently searching his ship for his missing hat. Hook soon spots Jake with his hat believing that the young pirates have stolen his hat as revenge. But before Hook could attempt to retrieve his hat he is accidentally land on a catapult that launches the captain into the sky and crashing on Never Land. The Monkey is briefly spotted as Jake use his spyglass to find where Hook landed.

The Monkey makes another brief cameo in the episode "Yo Ho, Food to Go!", after Captain Hook and Mr. Smee steal Jake and his crew healthy snacks they attempt to flee to Mysterious River to eat them in peace. Jake and his crew soon pursue the villainous duo to the river and demand they return the snacks at once. Hook merely scoff at the young pirate's demands. But this is short-lived as a mischievous Monkey swoops down from a jungle vine and swipes the banana out of Hook's hand and tosses the peel back at the captain forcing, Hook and Smee to search for a new place to eat them in peace.

The Monkey first formal appearance in the episode "Jake's Jungle Groove" where he stole Cubby's bongos which the young pirates were using to help Jake develop dance moves. The bongos also had the ability to force Captain Hook to dance uncontrollably, prompting the villain to attack in an attempt to destroy the musical instrument. The episode ends with the Monkey deciding to return the bongos but join Jake and his crew in their dance party with Marina the mermaid and her friends.

The Monkey would reappear in "Captain Hook's Parrot". Here, Skully is kidnapped by Hook and the Monkey uses the banana peels to slow Hook and his crew down, giving Jake, Izzy, and Cubby some time to catch up.

The Monkey reappears in the episode "Cubby's Mixed Up Map" with other monkeys they swipe Cubby's map from Captain Hook and his crew. The Monkey makes a cameo at the end of the episode "Hook's Playful Plant!".

The Monkey reappears in the episode "Invisible Jake", Jake and his crew discover the Pirate Magician's Lair, while searching through the various wonder within the magician's lair Jake come across a gold ring that turns the wearer invisible. Jake and crew decide to take the ring before it falls into the wrong hands. Captain Hook and his crew soon arrive determined to claim the ring power for himself. As Jake and his crew flee with the ring Hook and his men attempt to gain control of it the ring but it ends up in the hands of a mischievous monkey that activates the ring. While Jake and Hook crew search for the silly monkey, Izzy soon discovers a trail of banana peels and offer another banana for the invisible ring. The Monkey agrees to the deal returning the ring just in time as Hook and his forces attempt to swipe the ring from Izzy.

The Monkey reappears in the episode "Pirate-Sitting Pirates", while enjoying a snack on the beach Jake, Izzy, Cubby and Skully meal was interrupted by a mischievous monkey who steals Skully's crackers forcing the pirate parrot to give chase with Jake and his crew in pursuit. Meanwhile, Captain Hook and his crew were on the search for treasure using his treasure detector when the mischievous monkey swipes Hook's hat forcing the captain to join the chase but in the captain's pursuit Hook.

The Monkey makes a brief reappearance in the episode "The Remarkable Beardini!" sneaking into Pirate Island Hideout and later being chased out by Cubby as it attempts to take the Invisibility Ring.

The Monkey makes a brief appearance in the episode "Dancing with Pirates ", Jake explains to the viewers that pirates have a lot of tasks to do and even dancing can be a useful pirate skill.

In the storybook Follow That Sound. Cubby has plans to play the harmonica at Marina the Mermaid's big party tonight. But that sneaky snook Captain Hook hate the sound of the harmonica and decides to take it so he'll finally have some peace and quiet. But as Hook and Smee attempt to flee with the harmonica it is soon snatched away from the villainous duo by the Monkey who runs off into the Never Jungle forcing Jake and his crew to follow. Once Jake and his friends catch up to the monkey they soon ask the harmonica to return the harmonica which the monkey refuses. Jake and his crew soon come up with the idea to trade another musical interment for the harmonica. Using two coconuts the young pirates create maracas which the monkey happily trades for the harmonica. Cubby was so grateful he invites the monkey to join the party at Shipwreck Beach. The monkey and Cubby later help Mr. Smee get Captain Hook to sleep by playing a lullaby. Later that evening the monkey and Cubby enjoy playing their music for Marina the party. The Monkey is last seen sneaking aboard the Jolly Roger still playing his maracas preventing Hook from getting the song out of his head.

The Monkey makes a brief reappearance in the storybook adaption of Cubby’s Mixed-Up Map. As Captain Hook and his crew were making there way through Monkey Jungle to find the legendary Golden Dinghy using Cubby's Map. The Monkey is able to take it away from Hook long enough for Jake and his crew could catch up. Cubby is able to reclaim his map after swapping it to the monkey for banana.

The Monkey appears in the "Jake's Never Land Pirate School App." He can be spotted during the Map & Spyglass segment. The players learn to navigate Never Land with Cubby and then use the spyglass to find exciting treasures with Jake.

The Monkey reappears in the online game "Hook's Merry Winter Treasure Hunt". In order to recapture one of the presents that blew onto Never Land Captain Hook and Mr. Smee must distract the monkey.

"It's A Winter Never Land" 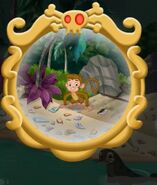 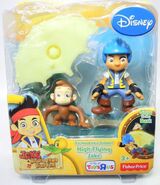 Retrieved from "https://jakeandtheneverlandpirates.fandom.com/wiki/Monkey?oldid=90567"
Community content is available under CC-BY-SA unless otherwise noted.