The Mighty Colossus is a massive battleship once captained by the equally legendary Captain Colossus.

Many pirates who sail the Never Sea have heard various tales of the legendary battleship and its brave captain coming to the aid of the aid of King Neptune when he was battling the mighty three headed serpent the Strake. And how it turn the tide of that epic battle but Captain Colossus victory came at a heavy price as he lost his Mighty Colossus to the depth of the Never Sea with the Strake's defeat.

The Mighty Colossus first appeared in the episode special "Captain Jake and the Never Land Pirates: The Great Never Sea Conquest". Captain Hook and his crew is followed Jake and his crew on the search for Captain Colossus's sunken battleship the Mighty Colossus and it's treasure. After sending Jake and his crew packing, Hook looks for the Mighty Colossus but soon concludes that it's a wild goose chase. However, the Jolly Roger's anchor soon get caught in some and accidentally frees the evil mer-wizard, Lord Fathom who heads for Neptune City, where he tricks Queen Coralie into helping him get the DarkLight Emerald and then imprisons her, Marina, and Stormy and takes over Neptune City. To deal with this new threat, Jake creates the League of Never Sea Captains: Himself, Captain Hook, Captain Flynn, Captain Frost, and Beatrice Le Beak. The League tries to stop Lord Fathom but he's too powerful. Jake's Destiny Sword suddenly makes the Mighty Colossus rise out of the water and makes him it's captain.

The Mighty Colossus reappears in the episode "Shark Attack!", While sailing the vast depths of the Never Sea Jake and his crew spot Doctor Undergear's mechanical shark like vessel. Undergear was very interested in the Colossus pieces in order to make more machines under his control.

The Mighty Colossus reappears in the episode Captain Hook's Colossal Collision. Jake and his crew where trying to uncover the various powers of the Colossus's special cannonballs, when one of the Gooey Balls bounces off target landing on the Jolly Roger and spraying all over Captain Hook who just emerged from his cabin after enjoying a bath.When Hook confronts Jake and his crew on the Colossus, Jake and his crew soon explain they they didn't mean any harm and was merely uncover the various powers of the Colossus.Hook had to admit he to was wondering about the various of the battleship and was just as eager to try one of the cannonballs for himself. Jake tries to warn Hook to be careful do to not knowing what the various balls can do but Hook didn't pay to much attention to the young captain's words, firing a Whirly-Ball to cause all means of chaos on the battleship. Jake and his crew were force to abandon ship,luckily Sharky, Bones and Mr. Smee help the young pirates from falling into Never Sea. Meanwhile Hook accidentally stumbles upon the Colossus's hidden turbo feature causing the battleship to steer out of control heading to Pirate Island. Jake and his crew manage to get back on aboard the Mighty Colossus with the help from Izzy's pixie dust and using the Mighty Captain Sword to replace the broken lever to the control panel Jake was able to slow down the ship.

The Mighty Colossus reappears in the episode "The Creature of Doubloon Lagoon", while cleaning the Mighty Colossus Cubby accidentally triggers signal flare cannon that summoned a mysterious Gill Creature aboard the ship. Later in pursuit of treasure.Captain Hook chases after the Gill Creature to a small island where hid a treasure, a golden sword once belonging Captain Colossus. Jake and his crew soon come to the creature aid and Jake is rewarded with Captain Colossus's sword and Gillie the Gill Creature friendship.

The Mighty Colossus only appearance in printed media is the storybook adaption of the episode special The Great Never Sea Conquest.

The Mighty Colossus is featured in the Disney Junior app game "Battle On The Never Sea". The Colossus severs as the main stage as Jake collects gold doubloons and various hidden objects to press forward in his quest. The ship is also featured during the loading phase. 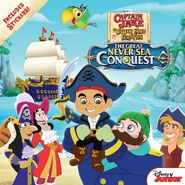 Add a photo to this gallery
Retrieved from "https://jakeandtheneverlandpirates.fandom.com/wiki/Mighty_Colossus?oldid=92737"
Community content is available under CC-BY-SA unless otherwise noted.