" Battle for the Book"

Michael Darling from the novel Peter and Wendy by J.M. Barrie

Puny pipsqueak (refereed to by Hook)

To fight off Captain Hook and his pirate crew

Maybe he wants to take us back to Never Land.
Let go, you old bilge rat!
Yeah, this stinks.
Cleave him like a biscuit.
My old drum!
That sneaky snook stole Wendy's book!
Can't we stay a little longer?

“Any friend of Tink is a friend of mine. ”
―Michael

Michael Darling is a supporting character from Disney Junior's television series Jake and the Never Land Pirates. He is the brother of Wendy and John Darling. He is the youngest child of the three Darling children.

As it is explained during the first film, Michael and his older brother John believe that Peter Pan, whom they have learned about from Wendy's stories, is a real person. Thus, they often make-believe that they are Captain Hook and Peter Pan in their nursery games. One night Peter Pan appears later, Michael is asleep, but awakens as Peter Pan chases after Tinker Bell. He is allowed to accompany Peter Pan and his siblings to Never Land and chooses to bring his teddy bear. Nana sees this terrified and tried to stop them, Michael sees this and spreads some of Tinker Bell's pixie dust at Nana causing her to fly and he calls her to follow, but not realizing that she's been held back by the leash still attached on her collar and is left behind waving at him.

Later after a few adventures, Wendy tells her brothers that they're going home tomorrow and that they need to sleep. After talking with Michael, it becomes apparent that Michael is starting to forget what home was like, as he at first thinks that Wendy, then Nana was his mother. Wendy is able to remind him who she was, and he agrees to go home. However, as they go to leave, the entire group is captured by Captain Hook and his crew. Once aboard Hook's ship, Hook offers to allow the boys to either join his crew or walk the plank. Micheal almost takes Captain Hook's offer but is stopped by Wendy. Michael is then forced to watch as Wendy walks the plank. However, Wendy is saved and is freed thanks to the timely arrival of Peter Pan, and they fight off Hook and his pirates.

In the end, Peter takes Wendy, John, and Michael home to London. Sometime after the events of the first film, Wendy still wanted to keep the spirit of Peter Pan alive and so she and her brothers would never forget the adventure they had she wrote the events down in a book. Michael still loves hearing the tales from the book, longing for his next visit to the island.

Michael wears pink footed pajamas, and carries a small teddy bear with him, even in the dream world of Never Land. He is quite sensitive. He looks up to his older sister Wendy and he sometimes bickers with John, his older brother.

Micheal makes his first appearance in the series in the episode special, "Jake and the Never Land Pirates: Battle for the Book" . Micheal was seen alongside John and Nana enjoying Wendy's tale of Peter Pan battling the nefarious Captain Hook. But that sneaky snook Hook hates to look like a bumbling fool, so he decides to fly to London, England, steal Wendy's storybook, and destroy her stories once and for all. Micheal with his siblings attempts to stop Hook from escaping with Wendy's book but were no match for the greedy captain who quickly fled. Wendy recalled a special song to summon Peter for help, however, Peter had his hands full defending the mermaids from a sea monster so he sends Jake and his crew accompanied by Tinker Bell to help battle Hook and save Wendy's memories. To help further the success, Wendy, Michael, John, and Nana, tag along on the adventure on Bucky to find the Jolly Roger, which has become lost in the fog surrounding London. During the search, Michael begins to show signs of forgetting about Peter Pan and Never Land. When they find Hook, the team is forced to split up from Bucky to confront Hook on the Jolly Roger. In the scuffle, Hook escapes to the streets below, and while Jake, Wendy, Izzy, and John pursue him, Cubby, Skully, Michael, and Nana stay on the Jolly Roger to deal with Smee, Sharky, and Bones. During the pursuit, John begins to show signs of forgetting about Never Land as well. When the balloon keeping the ship airborne is ruptured, the ship splashes down next to a dock, grabbing the attention of a late-night patrolling police officer who chases after Smee, Sharky, and Bones. By the time Jake, Wendy, and the others catch up to Hook, he's able to convince the officer that Wendy, Jake, and the kids are the bad guys, allowing him and his crew to escape back to the Jolly Roger as the fog clears so they can return to Never Land. Jake, Wendy, and the rest of the gang try to convince the officer of the truth, but it's not until he sees Tinker Bell himself does he realize he's been tricked and lets the kids go to pursue Hook, getting a kiss of thanks from Tinker Bell in the process.

By the time Bucky returns to Never Land, they've lost sight of Hook, however after remembering that Hangman's Tree underground secret tunnels system, Wendy and her brothers take Jake and his crew to Peter's hideout to use the secret tunnels to find Hook, only to find that Captain Hook is heading for the Valley of Fury to destroy Wendy's book in the pit of blue fire located there. Along the way, Wendy, John, and Michael begin to show signs of forgetting about Peter Pan and Never Land, but when Peter himself shows up, the Darling siblings start to remember and the team head to the Valley of Fury.

Micheal reappears in the episode "Captain Hook's Last Stand!", Jake and his crew accompanied by the Darling siblings prepare to greet Peter and Tinker Bell who have returned from there travels to the Lands beyond the Never Sea. Peter shows the various treasures from his travels and warns his friends of the danger of one, the Doom Stone that has the power to turn anyone into stone and gradually turn its user evil and into stone. Peter hides the Doom Stone within Hangman's Tree but Captain Hook overhears and manages to steal the Doom Stone turning Peter Pan to stone, Captain Jake and his crew get help from Wendy, John and Michael to find the magic items needed to rescue their petrified friend by hiding him within Tiki Forest.

Michael only appearance in the series printed media is the storybook adaption of Battle for the Book. Michael and John love hearing Wendy's stories about Never Land-especially when Peter Pan outsmarts Captain Hook! But that sneaky snook Hook hates to look like a bumbling fool, so he decides to fly to London, steal storybook, and destroy her stories once and for all. Michael accompanies his siblings with Jake and his crew in order to retrieve Wendy's book.

Michael only video game appearance in the series is the online game "Jake's Lost Story Quest." He along with his siblings are characters the player can choose to play as. If Not chosen Michael will still accompany the player from London all the way to Never Land. 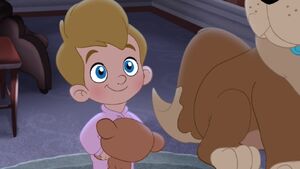 For more pictures and screenshots of Michael Darling, click here.

Retrieved from "https://jakeandtheneverlandpirates.fandom.com/wiki/Michael_Darling?oldid=90962"
Community content is available under CC-BY-SA unless otherwise noted.