Start a Wiki
The Mandolin is an instrument like a banjo except that it has four strings and is a recurring object featured in Jake and the Never Land Pirates.The Mandolin is played by Bones and is always with him and Sharky When they sing one songs.

The Mandolin along side Sharky and Bones make there debut in the episode "The Old Shell Game".Around the first few episodes, Sharky and Bones provided musical numbers and never actually took part in the main plot. Later on they began joining Captain Hook and Smee in their schemes involving Jake and the others.

In the episode "Peter's Musical Pipes". Sharky and Bones have failed to complete their chores in favor of playing music, Captain Hook forces the duo to walk the plank (which means being fired in a pirate's life). After their discharge, Sharky and Bones help Jake's crew who are coincidentally searching for treasure that requires musical talents and the use of Peter Pan's pipes, which they already have in their possessions, in order to be found. Hook spots Sharky and Bones working with the pirates and follows them to the treasure of Peter Pan's pipes. Hook steals the pipes but doesn't know how to play, preventing him from revealing the treasure. Sharky volunteers to play it if Hook hires him and Bones and promises never to have them walk the plank again. Hook agrees. The treasure is revealed and the pipes are returned to Jake by Bones. Hook still decides to steal the pipes but Jake and his crew escapes. Hook forgets the situation and makes way for the Jolly Roger. There, he orders Sharky and Bones to complete their work and play some music which they gladly do.

Theme Park and other Live appearances

The Mandolin is sometimes featured at the end of the series during the closing musical numbers by Sharky and Bones.

Puppet Sharky and Bones can be seen in Disney Junior Live at Disney's Hollywood Studios and Disney California Adventure.Similar to their role earlier in the series the duo provided musical numbers and never actually took part in the main plot.

Sharky and Bones reappears in this live musical stage show playing a larger role in this production, not just limited to provided musical numbers but also taking part with Hook and Smee in their schemes to unlock treasure hidden inside a mysterious volcano. 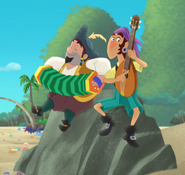 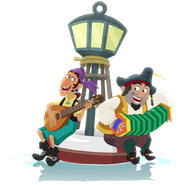 Add a photo to this gallery
Retrieved from "https://jakeandtheneverlandpirates.fandom.com/wiki/Mandolin?oldid=87892"
Community content is available under CC-BY-SA unless otherwise noted.