To rule the Never Sea

power, destroying mer-people's happiness for his own gain, causing despair for others, ruling the Never Sea

Controlling the creatures of the Never Sea with the DarkLight Emerald
firing energy blast from his trident.

Gets chased by the sea creatures and vows revenge on Jake and the others.

Finally... free!
Sinker!
I know you're out there anxiously awaiting my return.
Air-breathers! Get these nets out of my way!
So says King Lord Fathom, Ruler of the Never Sea!
Oh, yes I will, after I awaken my secret weapon: the Strake!
With the Strake at my side, no one will ever defy me again.
I grow tired of these silly sailor games!
I can! He will faithfully obey me once he sets his eyes on the DarkLight Emerald!
Great Power of the Never Sea, send these vessels far from me!

“ Show yourself and give tribute to your masterful master, Lord Fathom, the future King of the Never Sea! ”
―Lord Fathom

Lord Fathom is a character from the Jake and the Never Land Pirates. He is a sneaky shark-like mer-wizard who plots to take over the Never Sea. He is voiced by Malcolm McDowell.

Lord Fathom was once King Neptune's royal adviser who plotted to overthrow him. During his first attempt to rule the Never Sea he summoned the mighty Strake to attack Neptune using the power of the DarkLight Emerald. However, the tide of the battle turned in Neptune's favor. Thanks to the combined forces of Captain Colossus and Neptune they were able to defeat Lord Fathom by sealing him in Tortuga Triangle, while the Strake was sealed away deep within Dreadnaught Cove. However, in the process Captain Colossus's battleship, the Mighty Colossus was dragged into the watery depths of the Never Sea by the Strake. To assure that Lord Fathom couldn't use the power of the DarkLight Emerald to take over the sea again, King Neptune gave it to Queen Coralie who locked the emerald away deep within Neptune City for years. Even after his imprisonment Lord Fathom is still rather well-known and feared by the Mer-People for his villainous ways and great power. As revealed by Izzy, Mr. Smee, Sharky and Bones, Lord Fathom's nefarious reputation is even known by the inhabits of Never Land.

Lord Fathom has dark grey-green skin and tentacles for hair that resembles kelp. He has bright yellow eyes that seem to almost glow underwater, claw-like fingers, and a mouth full of razor-sharp teeth. Lord Fathom has a shark-like tail accompanied by fins on his arms, and a breastplate of armor with spiked shoulder pads.

Lord Fathom is a very dark and sinister villain with a wicked, yet sarcastic sense of humor. Lord Fathom is very manipulative and will not hesitate to destroy anyone he perceives as a threat to his own sinister plans. He is also vengeful, holding a vendetta against King Neptune and Captain Colossus for a prolonged period of time after his defeat. His only ally is Sinker, who he is shown to genuinely appreciate having around, but is easily annoyed by most often.

“ And the day I found the DarkLight Emerald, it gave me exactly what I needed: the power to rule the Never Sea! ”
―Lord Fathom

Aside from his natural abilities underwater, Lord Fathom's most notable source of mystical power is the DarkLight Emerald, when placed in his trident, gives him the power to control creatures the of Never Sea, conjure green blasts, manipulate the sea itself, and bring back sunken shipwrecks from underwater. However, without the emerald Fathom is virtually powerless in terms of magic.

He is also surprisingly effective at disguising himself, as evidenced by posing as an old mer-person to trick Queen Coralie into revealing the location of the DarkLight Emerald hidden in Neptune City. Later after he was defeated by Jake he would attempt to use the disguise once more to trick the young pirate captain into letting him retrieve DarkLight Emerald but failed.

Lord Fathom first appeared in the episode special "The Great Never Sea Conquest" as the main antagonist. After Captain Hook blasts Jake and his crew away, Hook searches the vast depths of the Never Sea for Captain Colossus's sunken battleship the Mighty Colossus but soon concludes that it's merely a "puny pirate trick" to waste his time. As Hook and his crew try to depart to search for other treasure, the Jolly Roger's anchor soon gets caught in some rocks but Hook manages to force his ship free by pulling the rocks out of the way. This accidentally sets Lord Fathom free who heads for Neptune City. Once in Neptune City Lord Fathom uses a disguise to trick Queen Coralie into getting revealing where she hid the DarkLight Emerald. With the Emerald back in his control Lord Fathom then imprisons Coralie, Marina, and Stormy and takes over Neptune City.

Unknown to Lord Fathom, Queen Coralie sends Sandy the Starfish to find Jake and his friends for help, while Fathom begins taking control of the various sea creatures with the power of the DarkLight Emerald. Jake and his crew head to Neptune City while Lord Fathom heads toward Dreadnaught Cove to free the Strake, much to the dismay of Lord Fathom's squid henchman, Sinker. Meanwhile, Captain Hook still desperate for treasure orders his crew to search the Never Sea, filling it with nets. Soon after, Lord Fathom confronts Hook and orders the captain to remove the nets from his sea, but Hook refuses to obey him saying, "I don't take orders from fish!". Captain Hook then gets distracted while Lord Fathom is angrily ranting because he sees Lord Fathom's Emerald claiming it as a "treasure". The mer-wizard now angry that Hook still refuses to remove the nets, and obey to him, decides to flood the deck of the Jolly Roger with a great amount of seawater. Luckily, Jake and his crew were sailing nearby and came to Hook's aid. He reveals to them he intends to unleash the Strake, the most ferocious and "unstoppable" monster in the Never Sea. After revealing his plan to Jake and his crew, and Captain Hook attempting to steal the DarkLight Emerald from him. Lord Fathom then uses his power over the sea to send their ships away after stating that he grew tired of their "silly sailor games". To deal with this new threat, Jake creates the League of Never Sea Captains: Himself, Captain Hook, Captain Flynn, Captain Frost, and Beatrice Le Beak. The League tries to stop Lord Fathom but he's too powerful. Jake's Destiny Sword suddenly makes the Mighty Colossus rise out of the water and makes him its captain. Meanwhile, Lord Fathom releases the Strake and places it under his control and a battle erupts. King Neptune appears and tells Jake that all he needs to defeat Lord Fathom and the Strake is to believe in himself. Using the powers of his Mighty Captain Sword, Jake finally defeats Lord Fathom and the Strake. He then re-imprisons the Strake and shatters the DarkLight Emerald, freeing Queen Coralie, Marina, Stormy, and the sea creatures. Lord Fathom and Sinker are soon chased away by the various creatures of the sea who are free from his spell. Later, he and Sinker are last seen in Dreadnought Cove plotting his revenge on Jake and the league as he manages to recover a piece of the DarkLight Emerald and swears he'll "not just rule the Never Sea but all of Never Land and the lands beyond", but the Strake suddenly roars furiously from behind the gate of Dreadnaught Cove, sending Lord Fathom and Sinker fleeing in terror once more.

Lord Fathom reappears in the episode "The Legion of Pirate Villains!". He plots to use the fragment of the DarkLight Emerald he saved during his defeat in the "Great Never Sea Conquest" to wake the Strake from his slumber again, but as Fathom attempts to use the power of the gem it gets knocked out of his hand when Captain Hook lands on him by accident upon entering Dreadnaught Cove in search of Captain Colossus's treasure. Hook is then snagged in a fishing net by the Grim Buccaneer believing he captured Lord Fathom. Lord Fathom is last seen left dizzy and confused as to what happened to him after being landed on. Sinker concludes that the net was really meant for his master, but Lord Fathom dismisses Sinker and realizes that the Emerald is being washed out to sea. He orders Sinker to help get his gem back as they both swim away after it. Lord Fathom is not seen throughout the rest of the special after this scene. However, he is later mentioned by Grim, ShiverJack and Doctor Undergear who all knew of Lord Fathom's vicious nature and great power believing that he would have made an ideal member of the Legion of Pirate Villains.

Lord Fathom's only appearance in printed media is the storybook based upon the episode special of the The Great Never Sea Conquest.

Lord Fathom is featured in the Disney Junior App game "Battle On The Never Sea." He appears as the final boss in Jake's adventure. He'll bombard Jake with large green fire blasts from his trident. Jake must wait until Fathom summons a smaller homing green fire blast that can be countered back on the evil mer-wizard. As Fathom health decreases his attacks become faster and during the counterblast phase he'll also start attacking energy blast sent back at him causing a ping-pong battle back and forth. Once Lord Fathom is defeated he loses his DarkLight Emerald and is forced to flee back into the Never Sea. 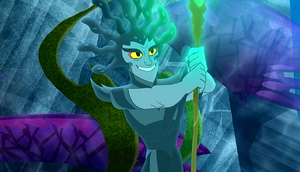 For more pictures and screenshots of Lord Fathom, click here.

Retrieved from "https://jakeandtheneverlandpirates.fandom.com/wiki/Lord_Fathom?oldid=91739"
Community content is available under CC-BY-SA unless otherwise noted.